Fizzy Fairy Apothecary is a subscription box featuring the wonderfully geeky bath treats by the Etsy shop of the same name. Famous for her Pokeball bath bombs with tiny Pokemon figures inside, her shop caters to the nerdy bath fans. Each box promises 6 bath bombs from a certain fandom. Her bombs retail for anywhere from $5.50-8 on the Etsy storefront, so it’s a pretty good deal. Right now the subscription box is sold out on Cratejoy, so they may be taking a hiatus at this time.

August’s theme was Avatar: The Last Airbender! This is one of my favorite animated series; I don’t even classify it as a kids’ show because it’s that good, and anyone can watch it. I never got into The Legend of Korra, though. There was a protective layer of paper squiggles, then a layer of tissue.

The bombs are then wrapped in bubble wrap as well. Each bomb is shrink-wrapped in plastic to keep it intact.

This print is by Ivy McLurdy, but I couldn’t find a DeviantArt page or anything of hers. Still, it’s super cute, and features Team Avatar, including Momo! I love Sokka and Katara giving everyone rabbit ears… I totally do that.

The reverse of the print has the product information for the bombs listed.

Fire Nation Button ($1) And as a little bonus, we were also sent a button! Mine is the Fire Nation symbol.

Avatar Yangchen (Mountain Air) Yangchen was an Air Nomad and the previous air bending Avatar before Aang – the Avatar always cycles through the four elements. Evoking the crisp airy scent of the mountains, this bomb has a nice clean scent to it.

Avatar Kuruk (Amber, lavender, musk, sandalwood, mint) Kuruk was the water-bending Avatar preceded by Yangchen. This bomb is so pretty! I love the design.

Avatar Kyoshi (woods, patchouli, clove, earth) The earth-bender, Kyoshi, lived to be 230 before her death. In the show, she fights with two golden fans. This is probably one of my favorite bombs in the box – the scent smells like a forest, but also with a spice. It’s perfect for fall.

Avatar Roku (Patchouli, basalm, sandalwood, crackling firewood) Roku was the Fire Nation-born Avatar who followed Avatar Kyoshi. This bomb invokes the scent of smoke from a fire and has a very woodsy scent to it. I think I would like this as a candle more than bathing in it!

Uncle Iroh (lemongrass green jasmine tea) Iroh is one of my favorite characters! He was often the comic relief but he also was one of the smartest, wisest characters. He loved tea and his dream was to own his own tea shop, so this scent is perfect for him!

Team Avatar (Florals, orange blossom, spearmint, musk, patchouli, friendship, and adventure) The original Team Avatar was Aang, Sokka, and Katara. Along the way, they met Toph and also joined up with the exiled Prince Zuko. The bomb’s design is the arrow tattoo on Aang’s head, which looks awesome. The scent is great, and there was also glitter in this bomb as well.

This set of bombs was heavy on the deep, earthy scents, which works well with the world Avatar is set in. My favorite scents were Kyoshi, Uncle Iroh, and Team Avatar! The bombs were a good size and fizzed nicely in the bath. The bonus print and button are great because while bath bombs only last a few minutes, you still have something to enjoy once the bulk of the box is gone.

Visit Fizzy Fairy Apothecary to subscribe or find out more! 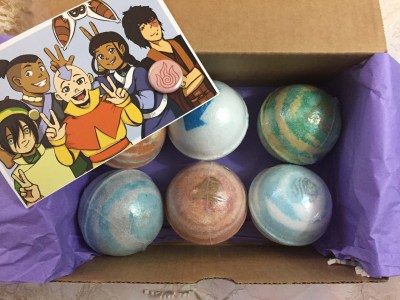