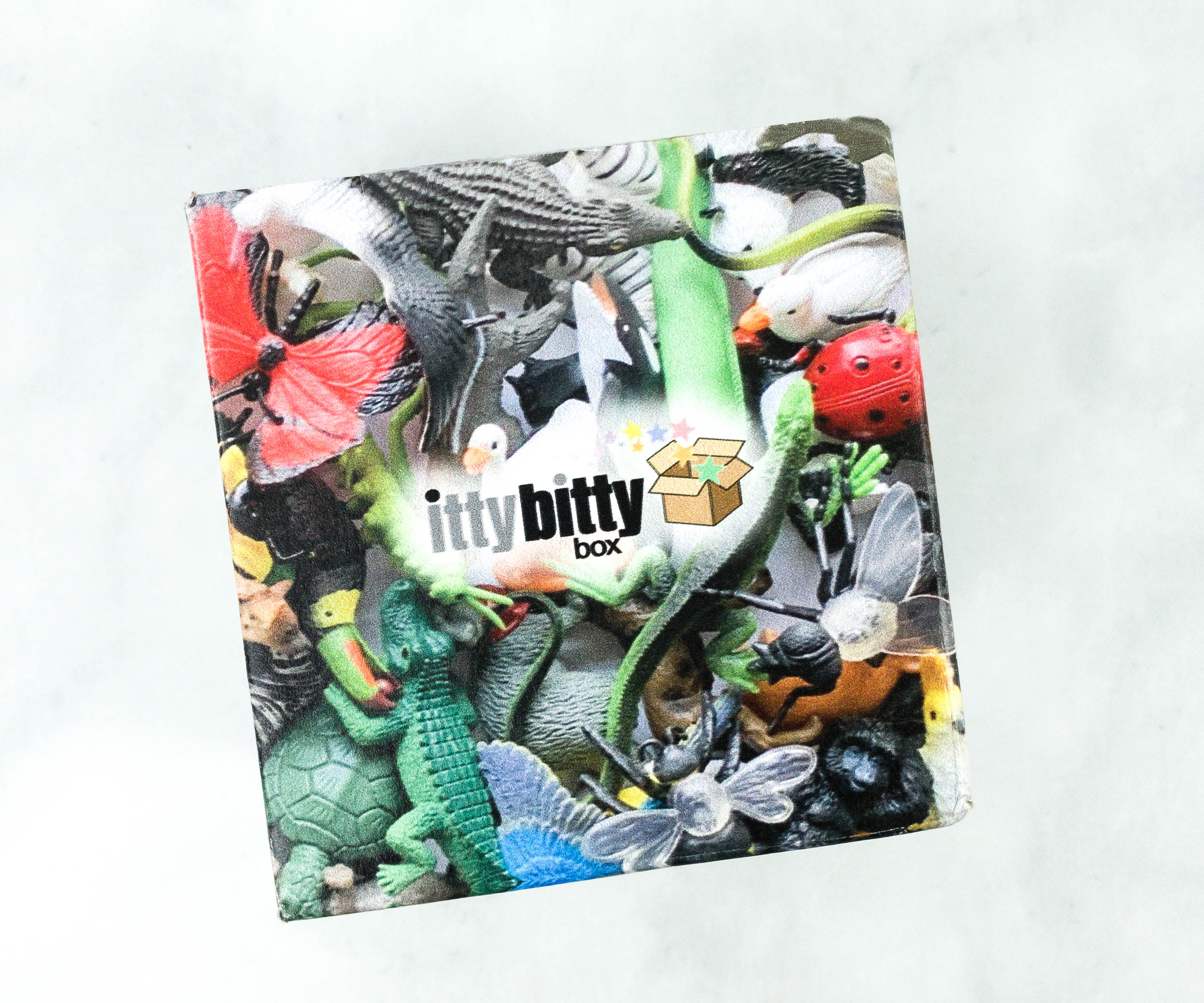 Itty Bitty Box is a toy subscription that sends mini animal-themed figures to your door every month. Every box comes with different quality-crafted mini replica figurine toys that may include deep sea, jungle, and farm animals. This box may also include some figures inspired by prehistoric creatures such as dinosaurs. These toys are great for imaginative play! The subscription is $16.99 per month. 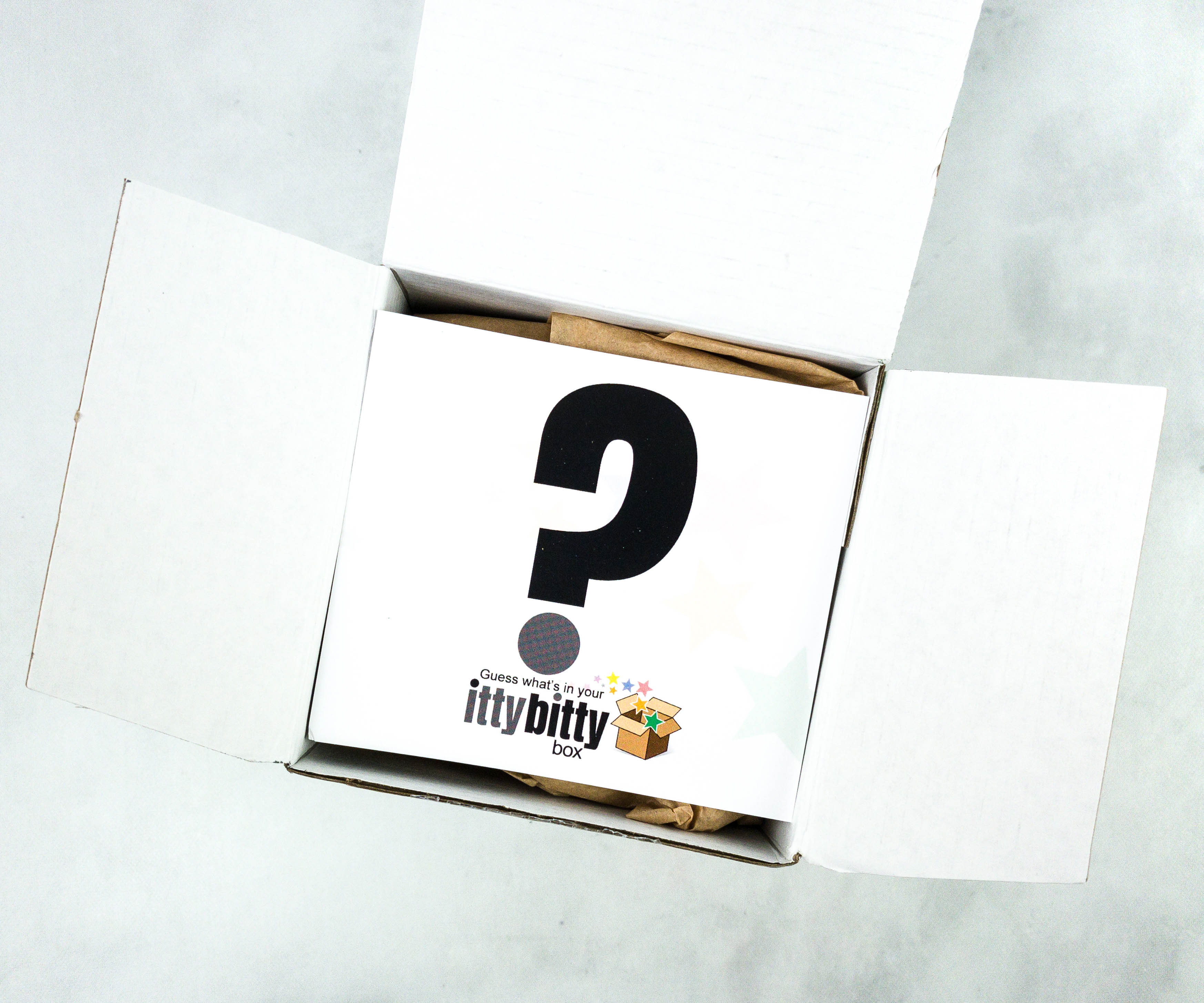 On top of the items is a card with a big question mark. 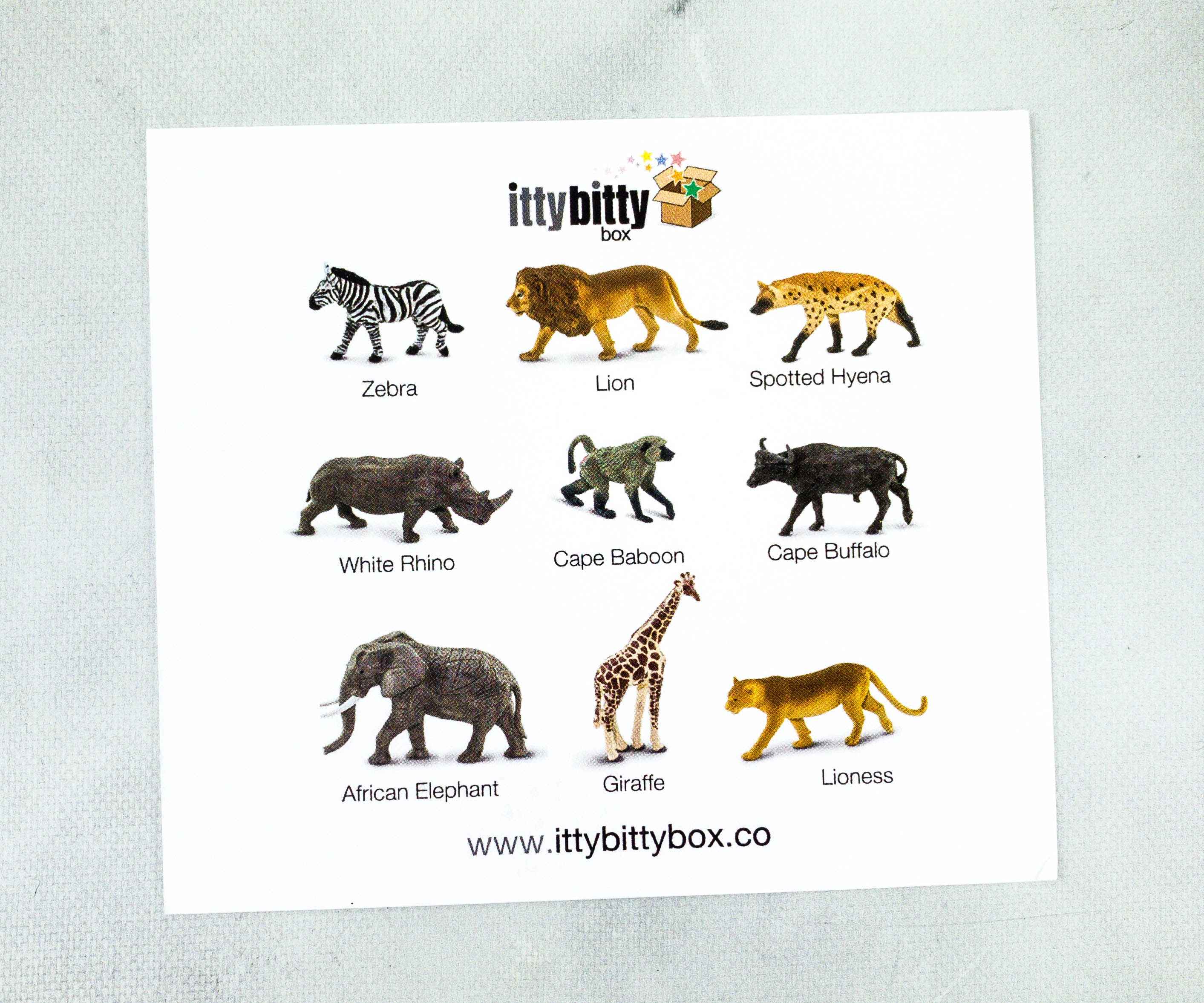 Here’s the card that lists all the mini-figures included in the box, along with photos. 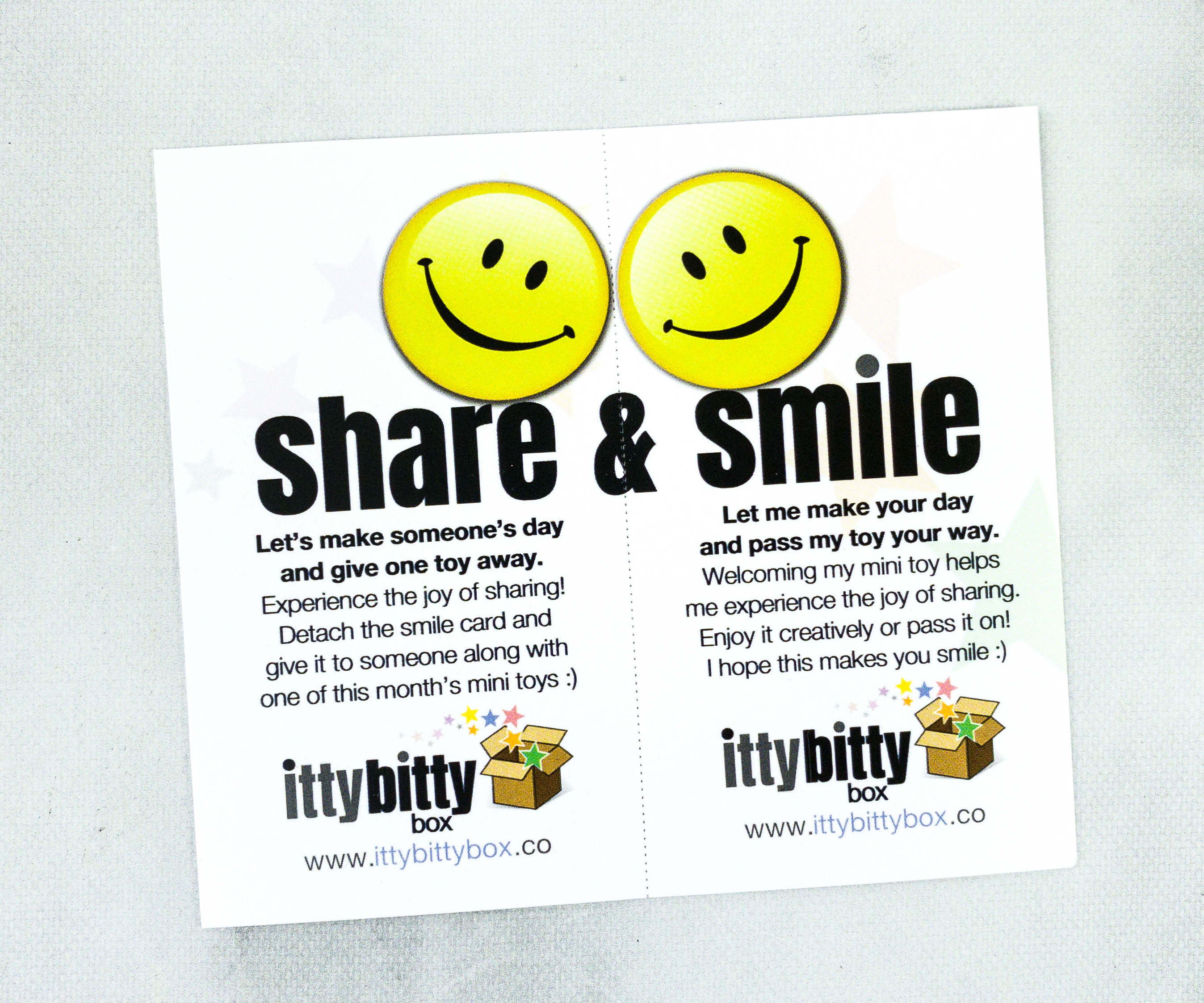 What’s great is that they encourage sharing! Kids can simply tear the smile card and give it to someone along with one of the toys from the box. 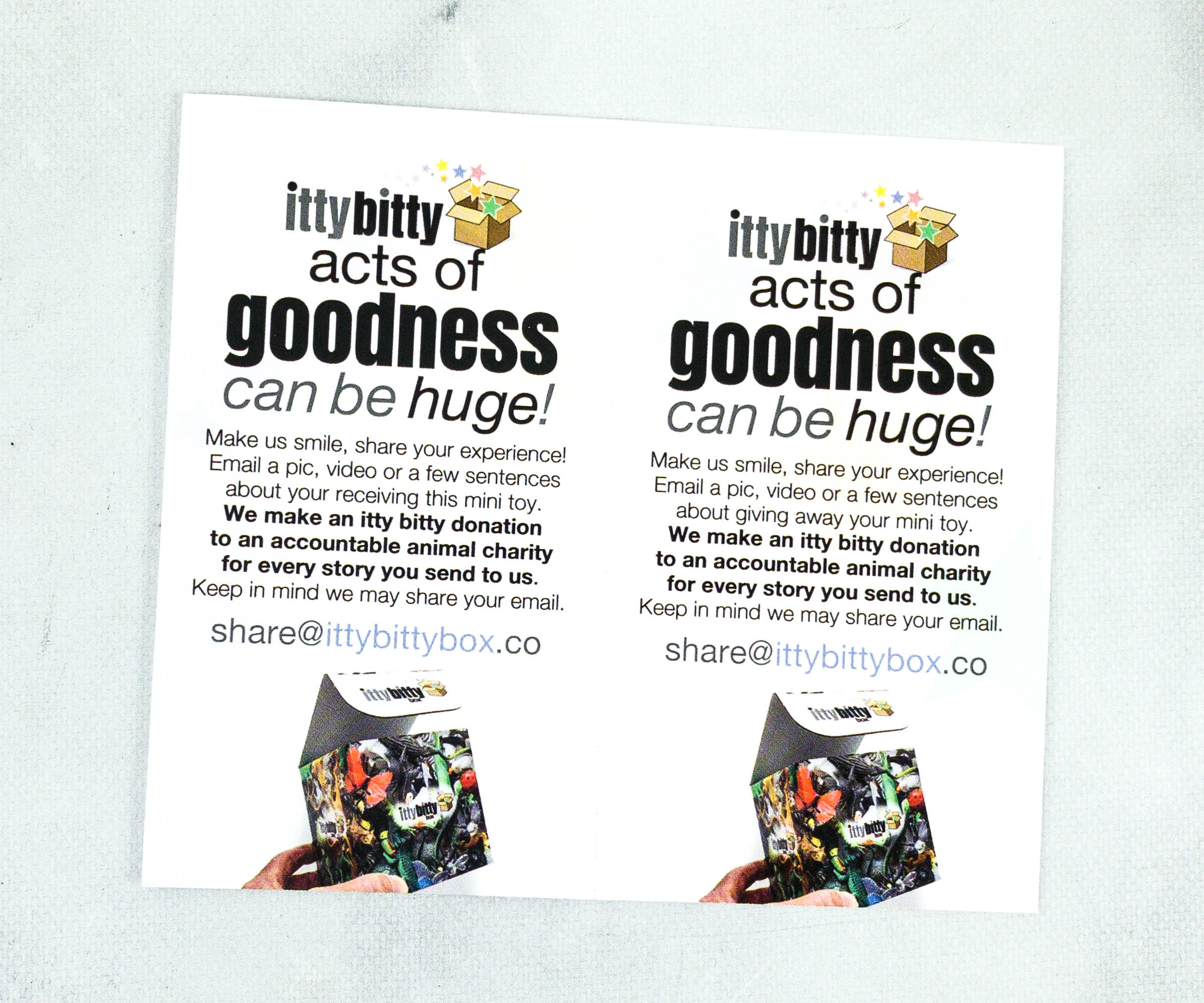 According to the card, Itty Bitty donates a part of their income to an accountable animal charity for every story we send to them. The instructions on how to send stories are on the card. 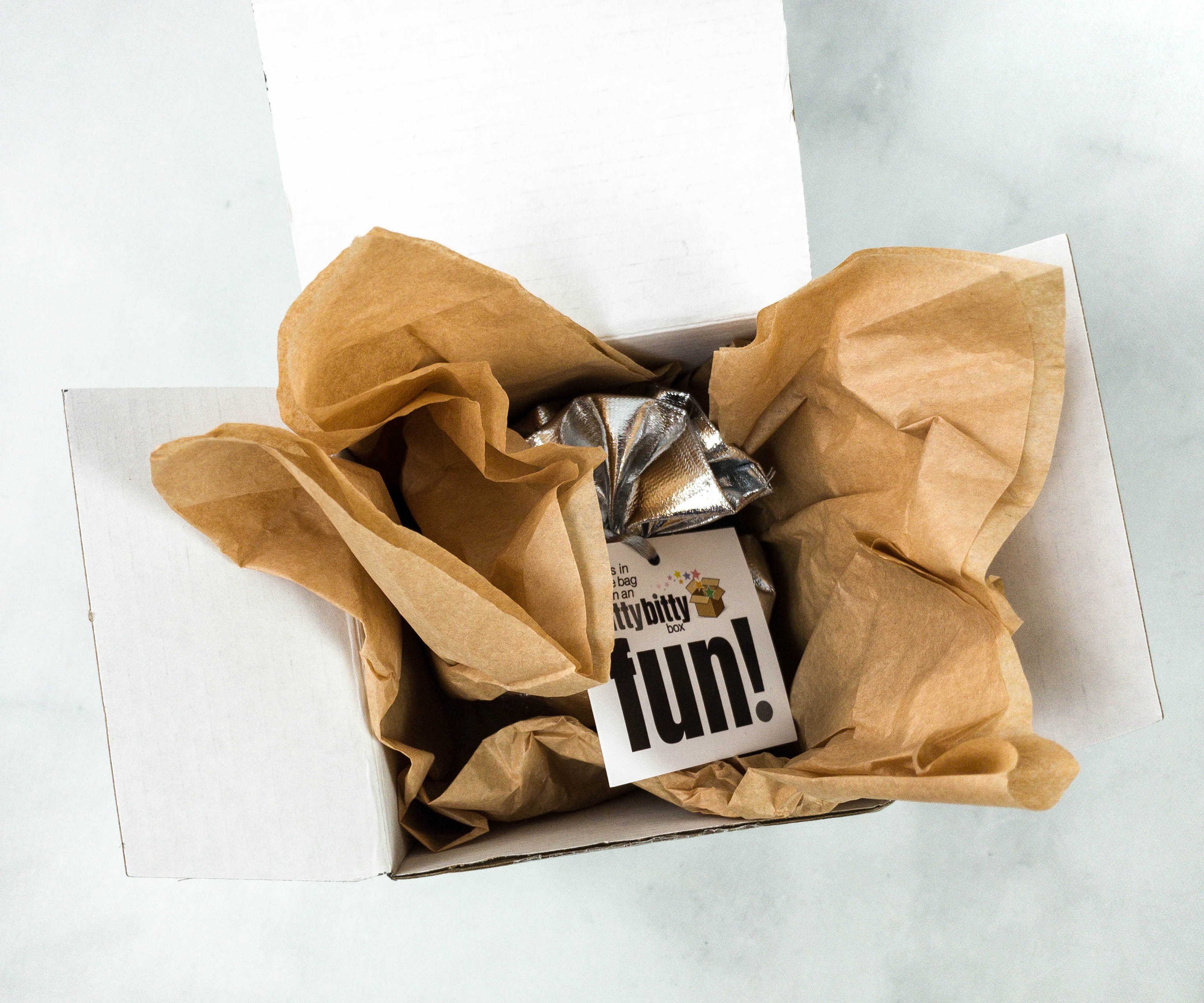 All the items are carefully packed inside a brown wrapping paper. 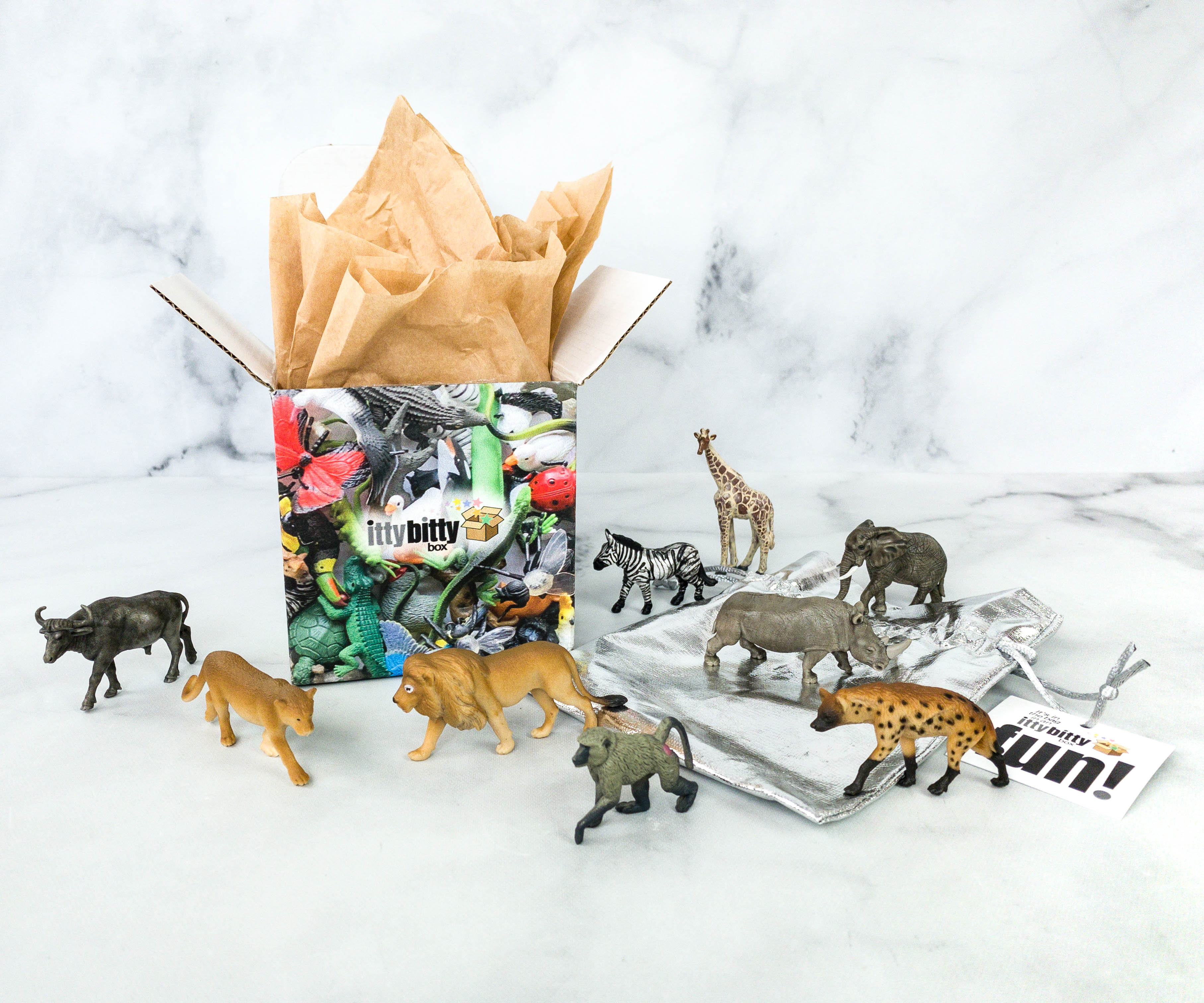 Everything in my September 2020 box! 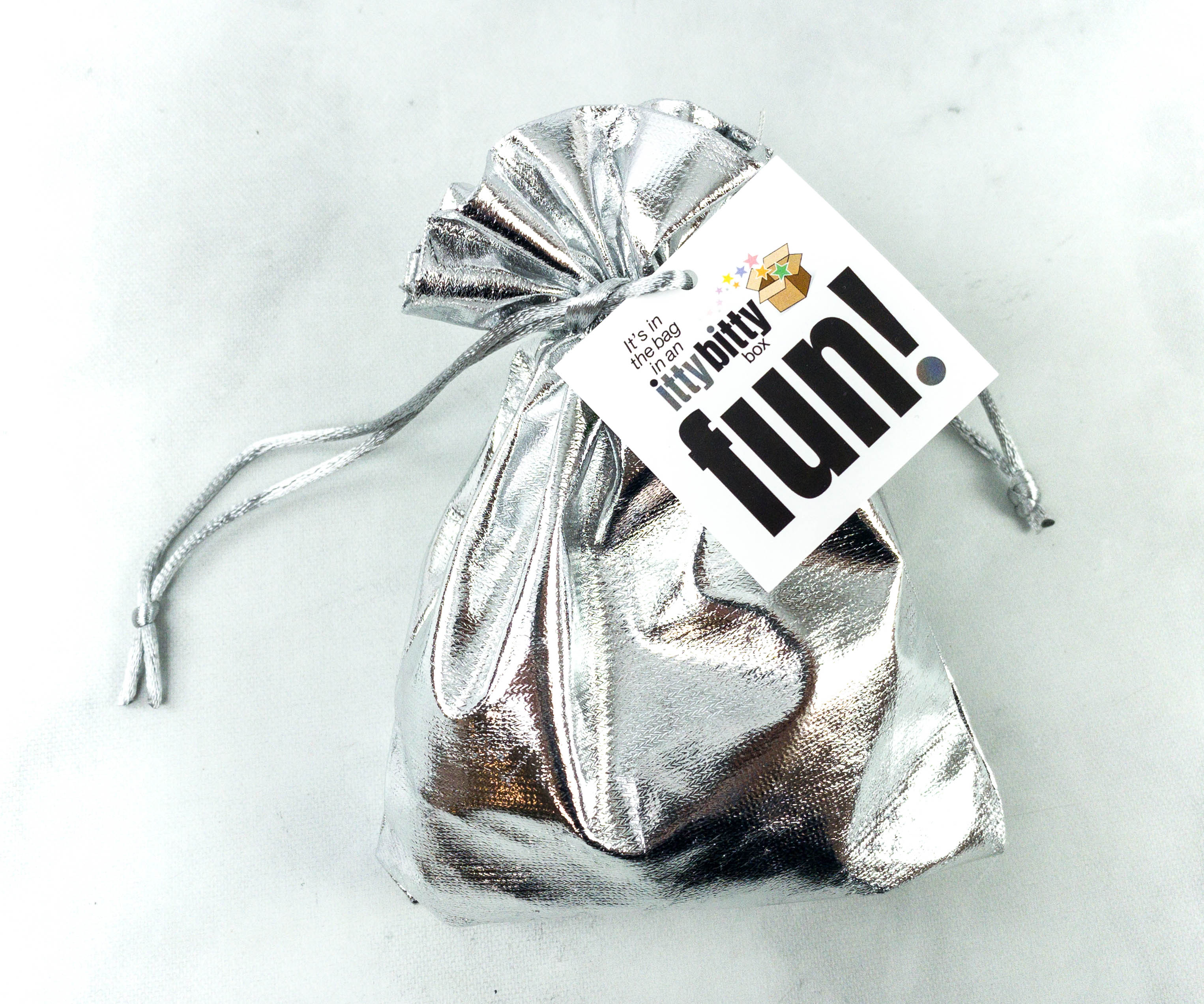 The toys came in a shiny, silver-colored, drawstring pouch bag. 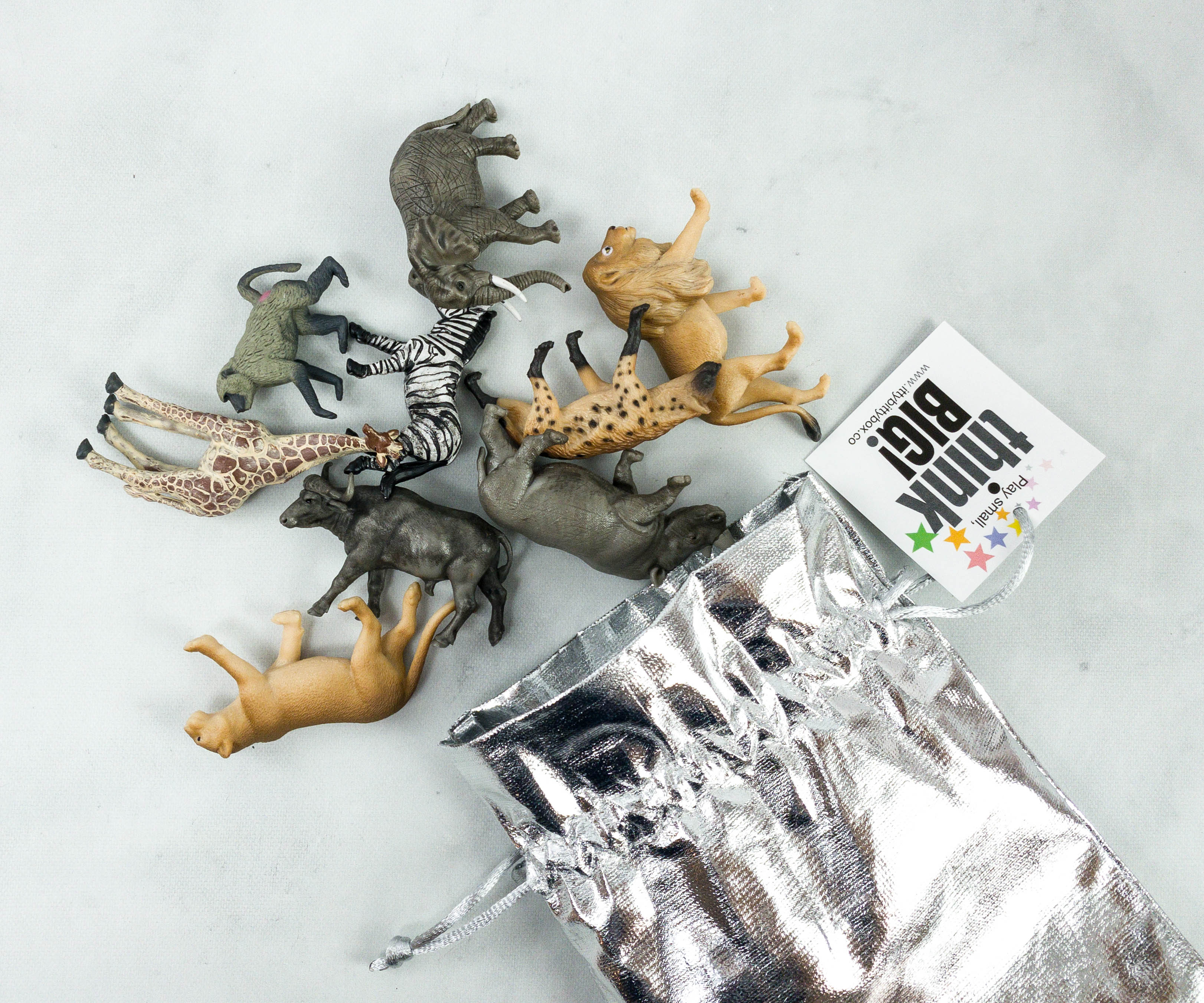 Check out all the mini-figures! 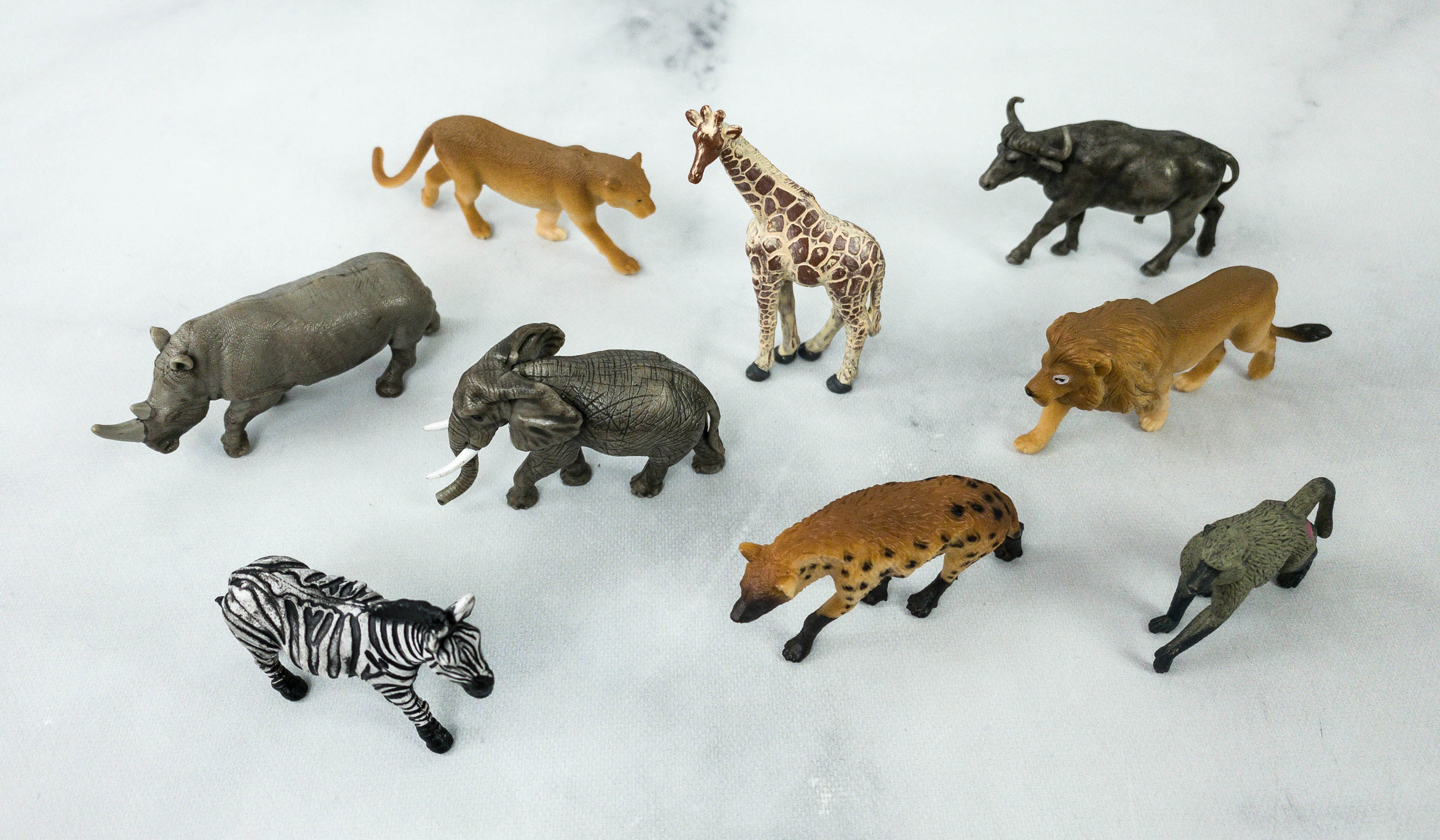 We received a total of 9 well-detailed animal figures! 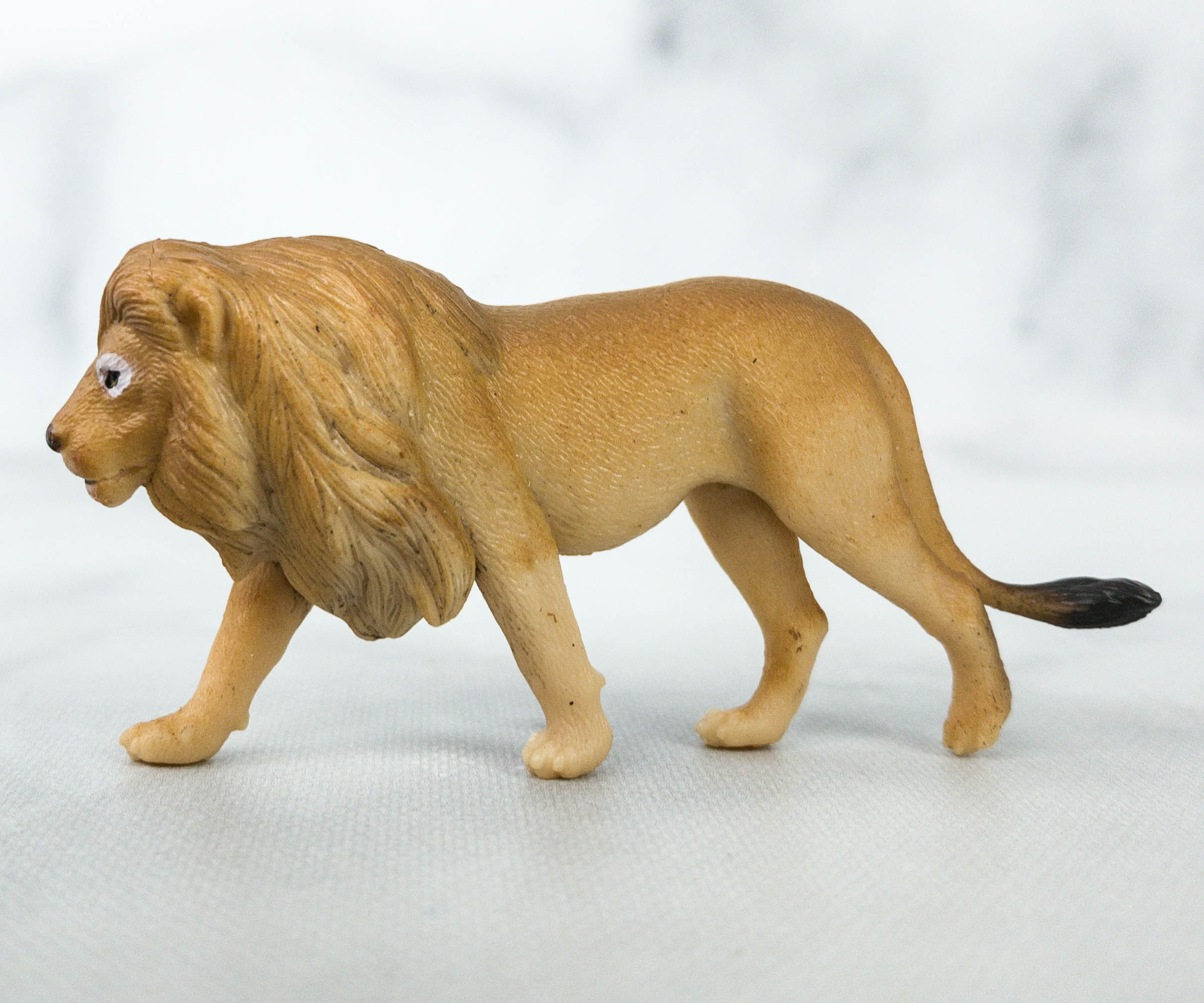 Lion. First in our box is the king of the jungle! The lion is a large, powerful animal. It has a strong, muscular body that is well-depicted on this figure. It’s also characterized by its thick mane and hairy tuft at the end of its tail. Lions are territorial and they live mostly in groups called pride. They hunt their prey in a group, and they are definitely the animal that sits on top of the food chain! 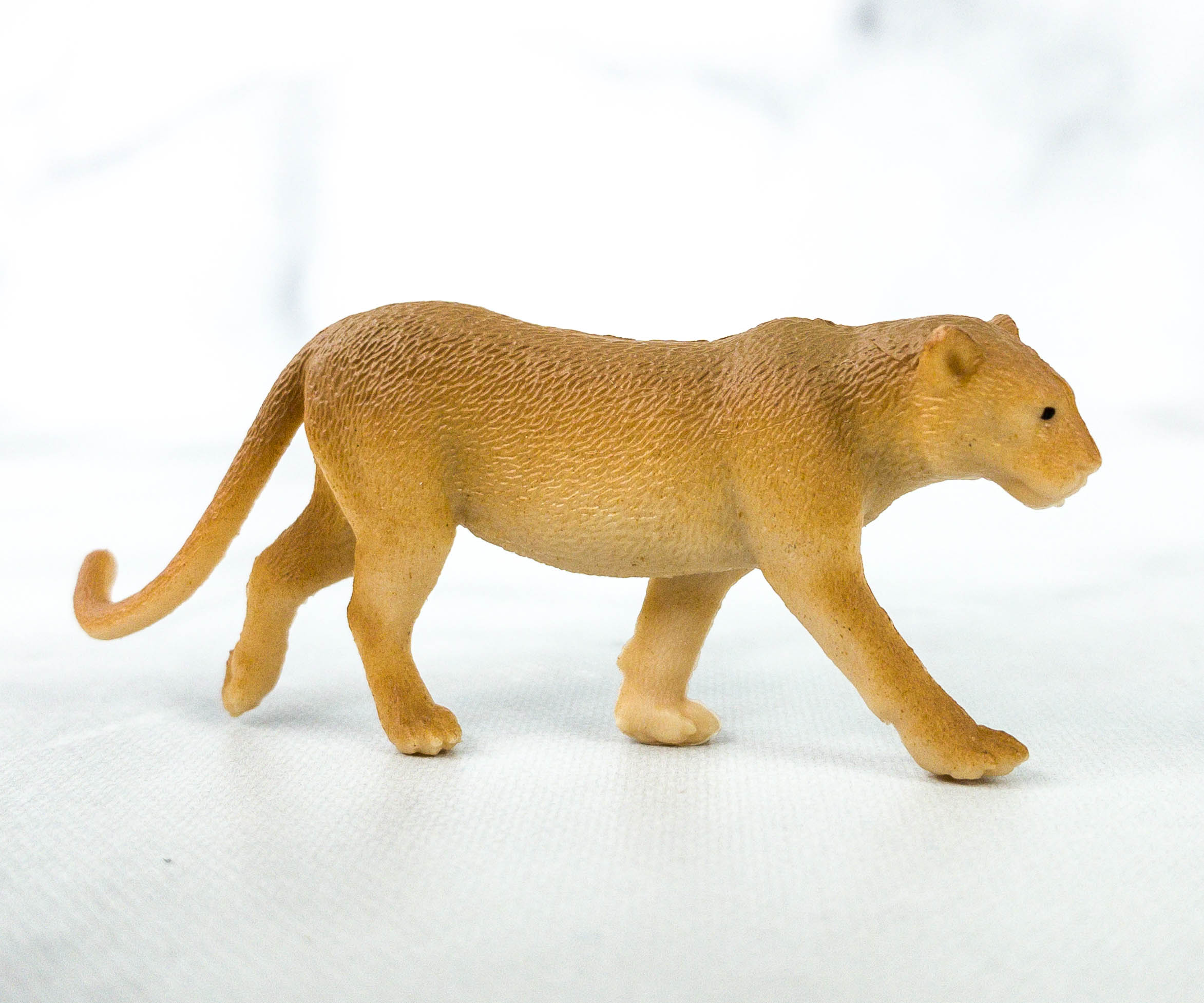 Lioness. This is the female version of the lion! Like the lion, the lioness is also a ferocious hunter. It carries the same features as a lion except for the mane and the hairy tuft on the tail. The lioness is the most actively working member of the group, making them the primary hunter of any pride. 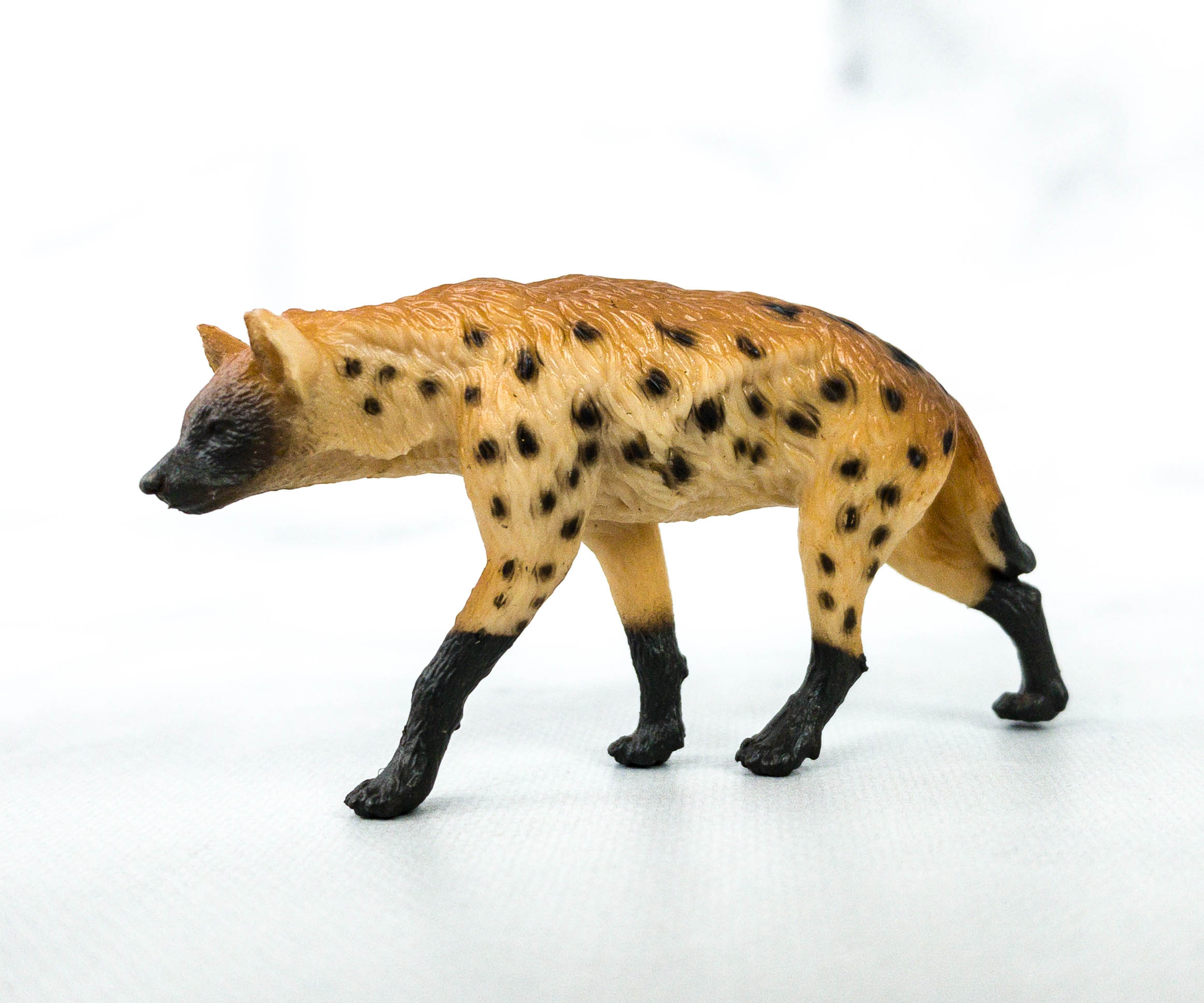 Spotted Hyena. The spotted hyena is also known as the laughing hyena due to the sounds it produces, which is quite similar to a laughing human. As seen on the figire, this animal features a long and slender brown body with spots and a long tail. Hyenas hunt in a group, and they are known to be as the scavenger hunters since they also eat whatever meat was left by other predators. 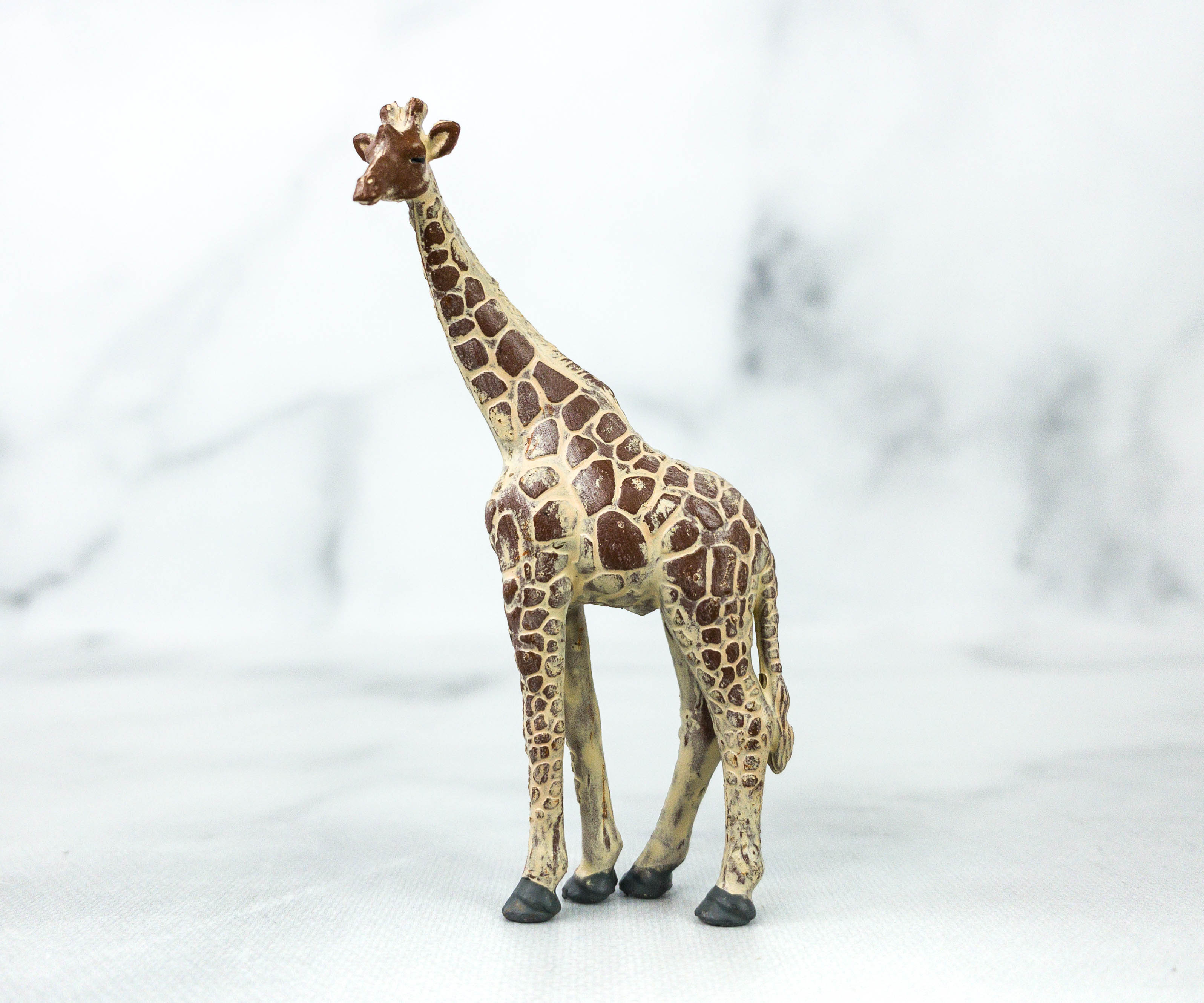 Giraffe. Standing at an average height between 14 to 19 feet tall, giraffes are considered to be the tallest animal in the world. They are herbivores, meaning they only eat plants and they usually get them on top of the trees. Giraffes are also known for their beautifully spotted coats which are unique and distinct with each and every other giraffes. Although this figure is small, the details are on point and they also captured the giraffe’s body proportion well! 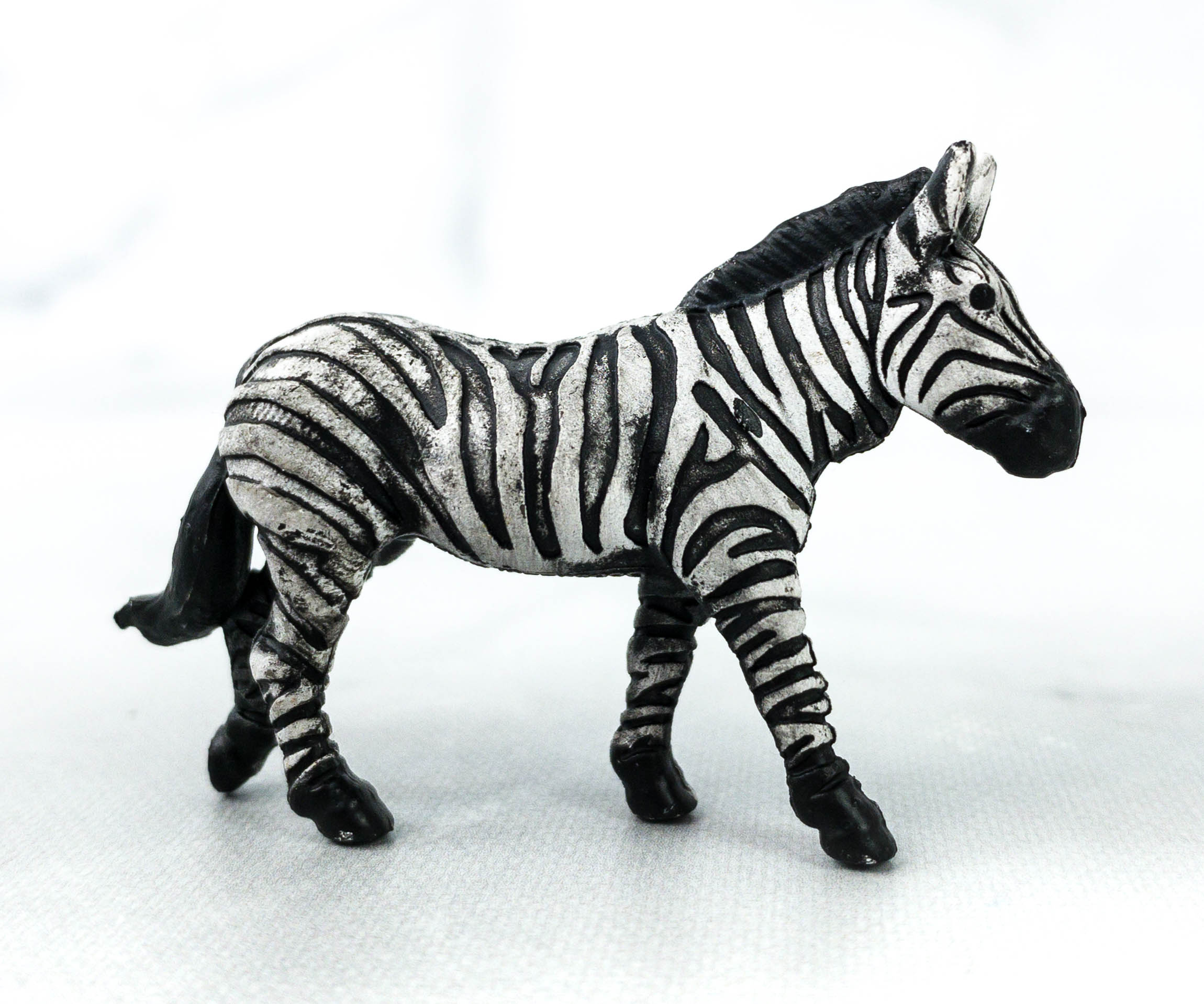 Zebras. Zebra, a four-legged mammal, is easily recognized by its bold black-and-white stripe pattern. Its belly and legs are unstriped, but their muzzle is dark and the skin underneath the coat is black. The stripes appear at eight months but the patterns are already visible on their third to fifth week. Like giraffes, a zebra’s pattern is distinct and unique with each other. This is one of my kids’ favorite animals in this month’s box! 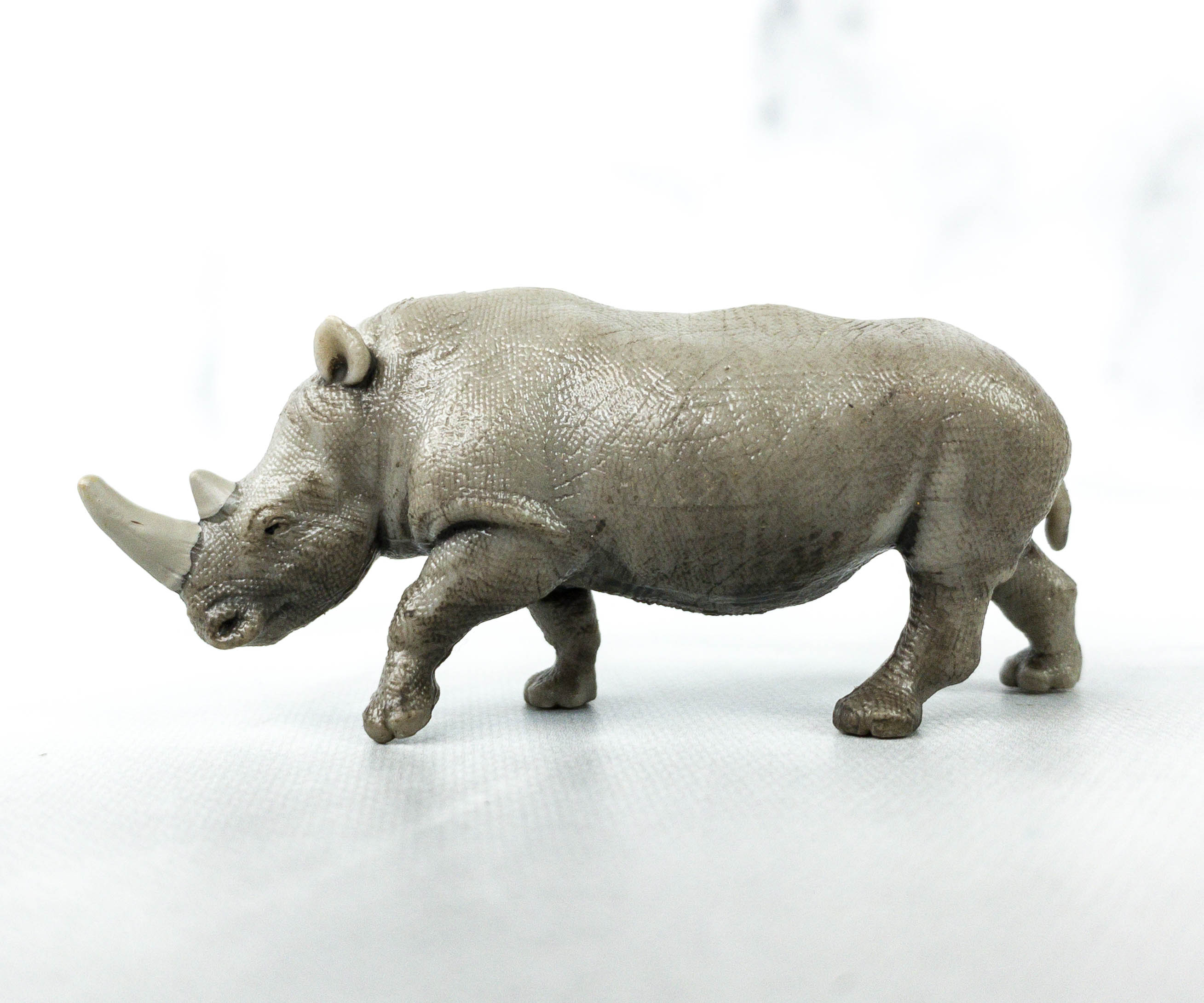 White Rhino. The white rhinoceros is the largest of the five living species of rhinos. It’s considered to be the second-largest land animal next to elephants. Aside from its colossal body, it’s known for its large head, short neck, and broad chest, which are all well-depicted in this figure. Male white rhinos are territorial, and they ark their territories by putting a pile of dung on it. Rhinos are famous because of their horn, and it is also one of the main reasons why their status is near extinction. 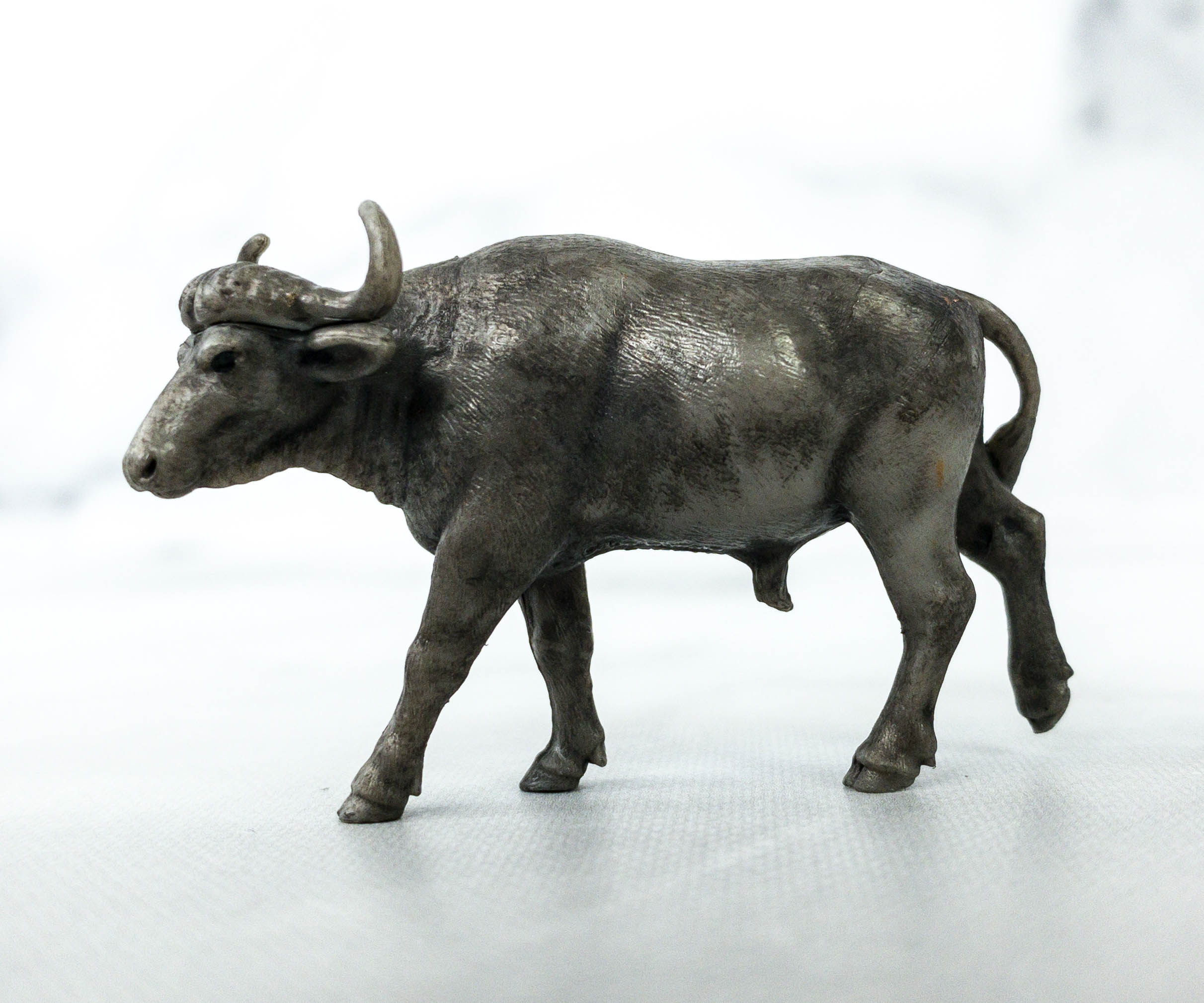 Cape Buffalo. Also known as the African buffalo, the Cape buffalo is a large, fierce, and strong bovid specie that features a long stocky body, short but thick legs, and a pair of sturdy horns that curve back and slightly up. Though African Buffalos are herbivores, they are still considered to be one of the most dangerous animals on the African continent, as it slaughter, trample, or even kill more than 200 people every year. This figure is small, but it indeed looks fierce! 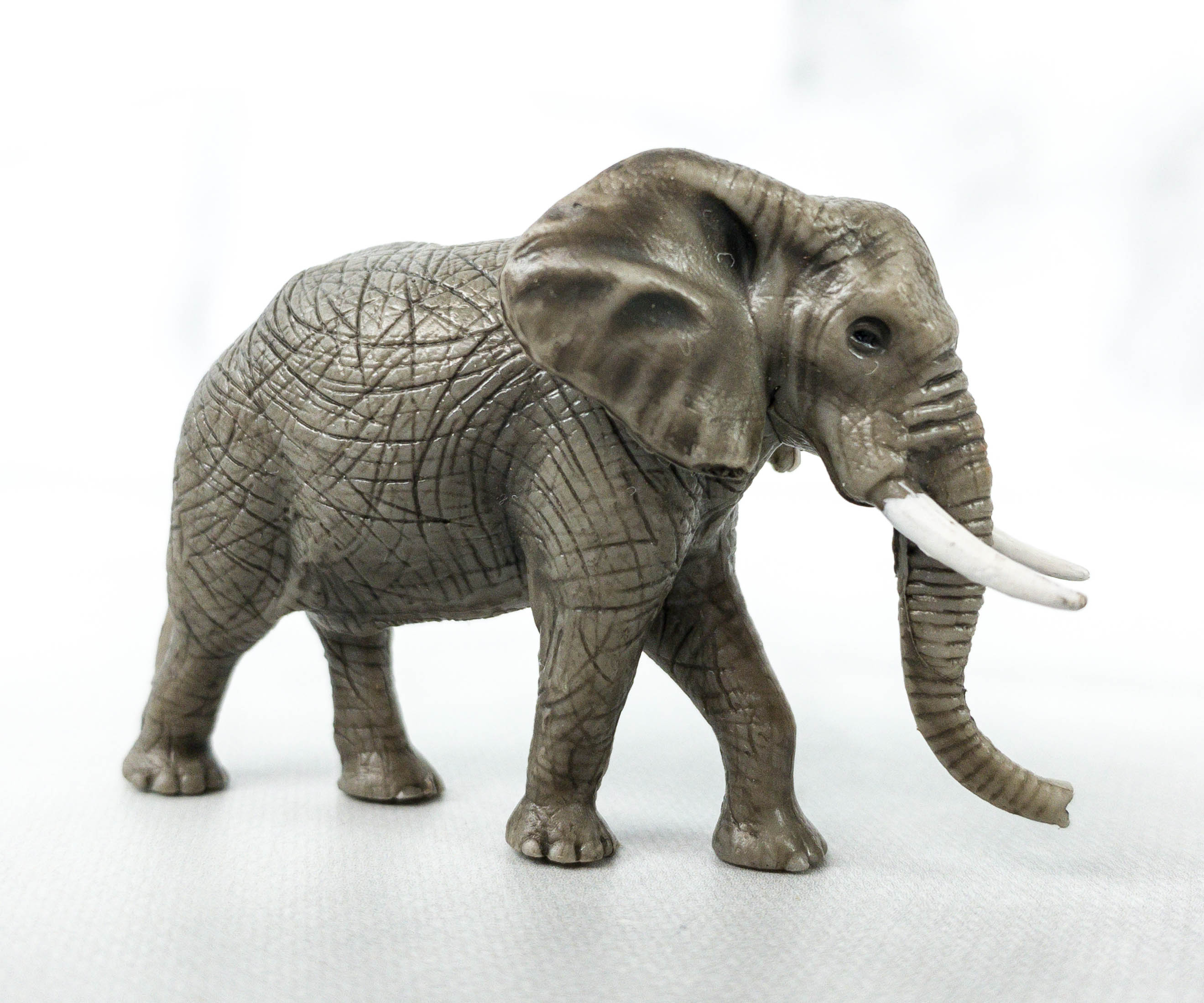 African Elephant. African elephants are considered to be the largest land animal. Elephants are herbivores, they eat roots, grasses, fruit, and bark. They can consume up to 300 pounds of food in a single day. Their trunks work like their arms, they use it to breathe, drink, eat and take a bath. 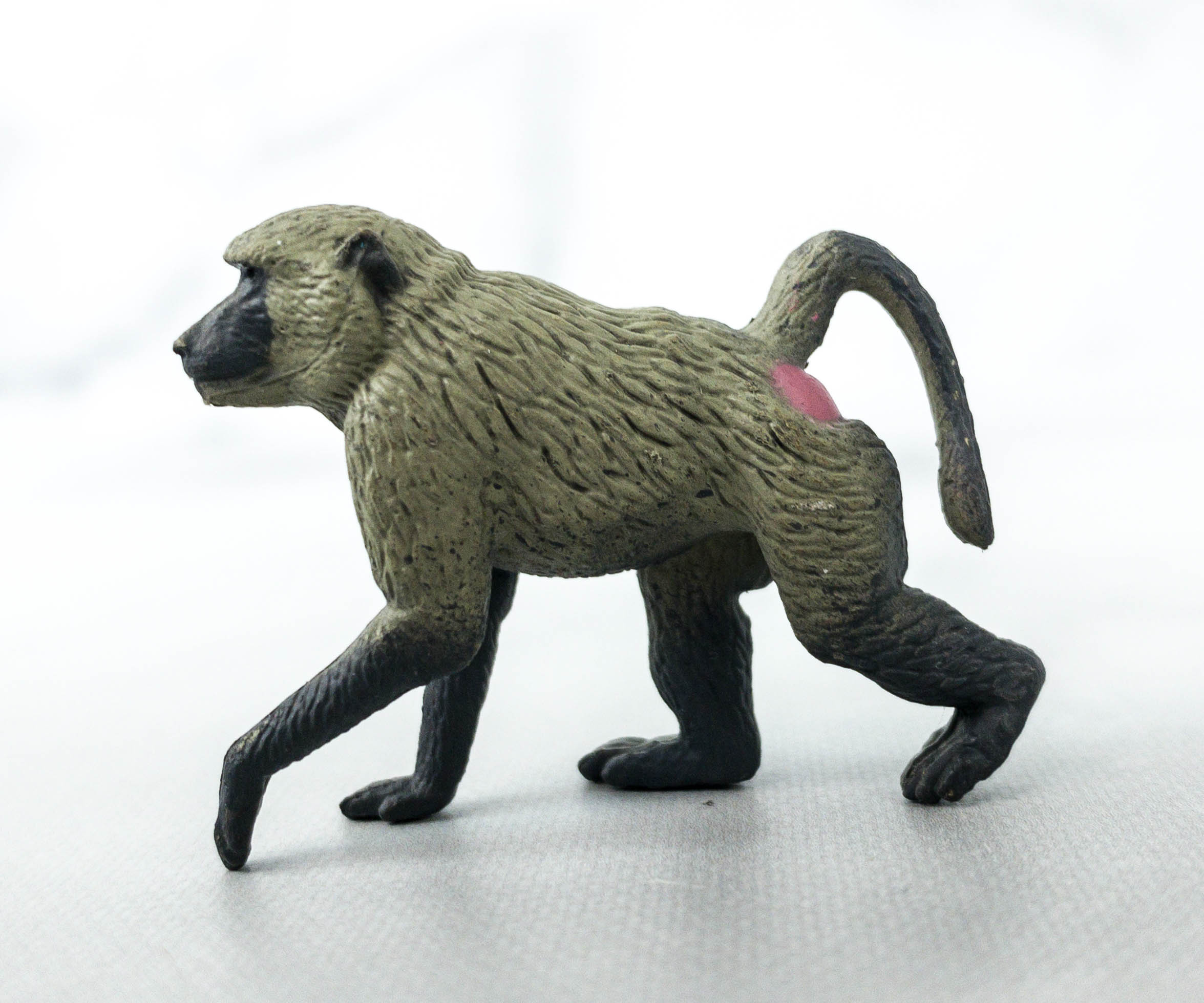 Cape Baboon. The Cape baboon generally has a heavy, dark brown to a gray color with black feet and a patch of rough hairs on the nape of its neck. This figure depicts the baboon on all fours. They are omnivorous, they prefer fruits but also eats small vertebrates, insect, and grass.

Itty Bitty Box is a fun subscription for kids who love playing with figures! This month, we received an excellent curation of animal-themed mini-figurines, and the featured animals are all from South Africa. The toys are well-detailed, as they all look exactly the same as the real animals. My kids loved them and had hours of fun playing with them. Aside from being toys for imaginative play, these figures are great collectibles and make a fantastic stocking stuffer!

What do you think of the Itty Bitty Box?

Visit Itty Bitty Box to subscribe or find out more! 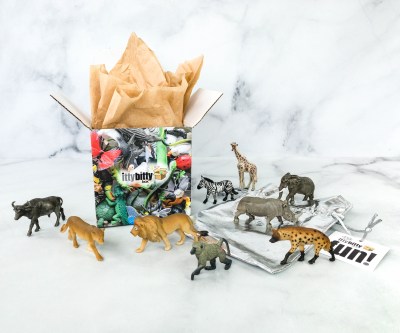