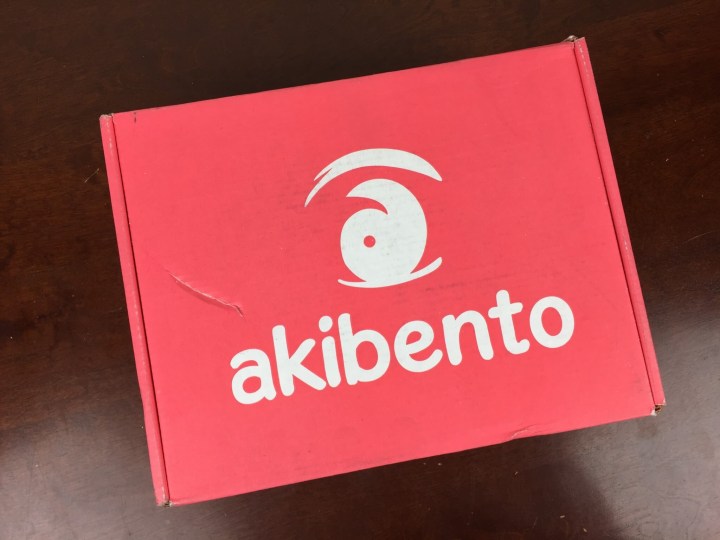 Akibento is a new monthly Anime subscription box! They promise an epic shirt monthly and $60 in value over 6-8 items, all perfect for anime fans! 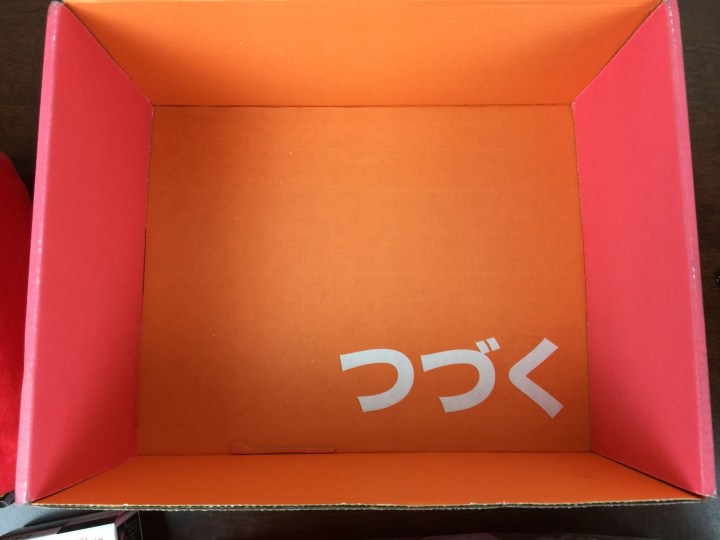 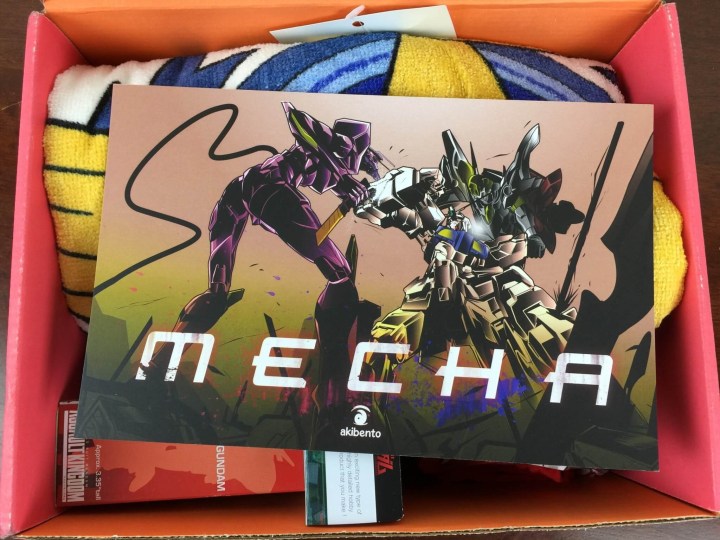 The theme of this month’s box is another popular genre in anime and manga: mecha (pronounced ‘mek-ah’). While the definition of this term is wide, mecha most typically refers to a fighting machine (frequently humanoid in nature) controlled by, and much larger than, a pilot. It is a machine in and of itself and while integration can happen, it is not an actual physical part of its operator. Some examples of mecha include the Magitek Armor of Final Fantasy 6, the Imperial Walkers in Star Wars, and the cargo loaders in the movie Aliens. While references to and mechas themselves do appear in other types of manga and anime, they are a favored theme in shonen, or ‘boy’s manga’ in Japan. 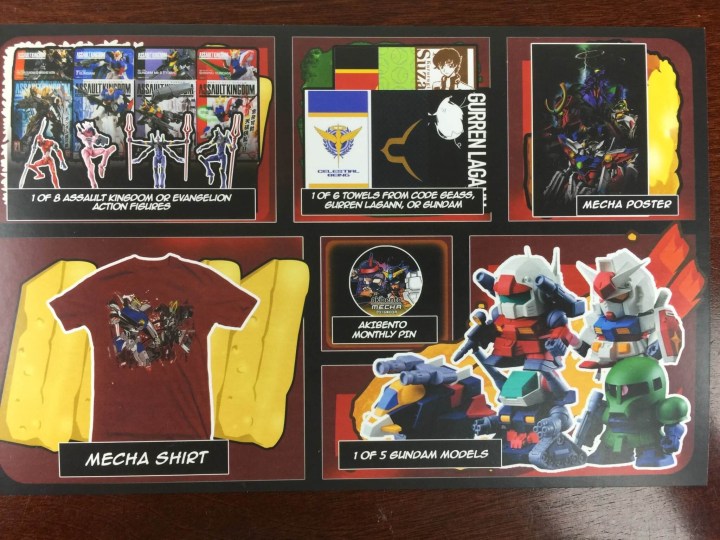 The information card lists the items in the box and their pictures. 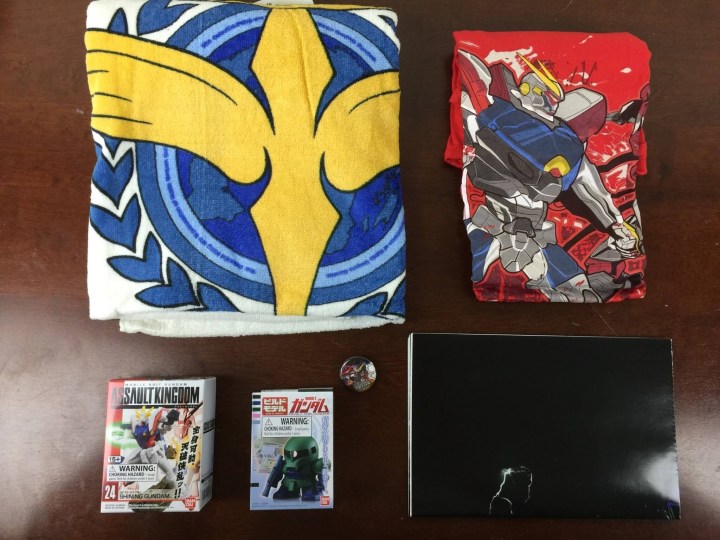 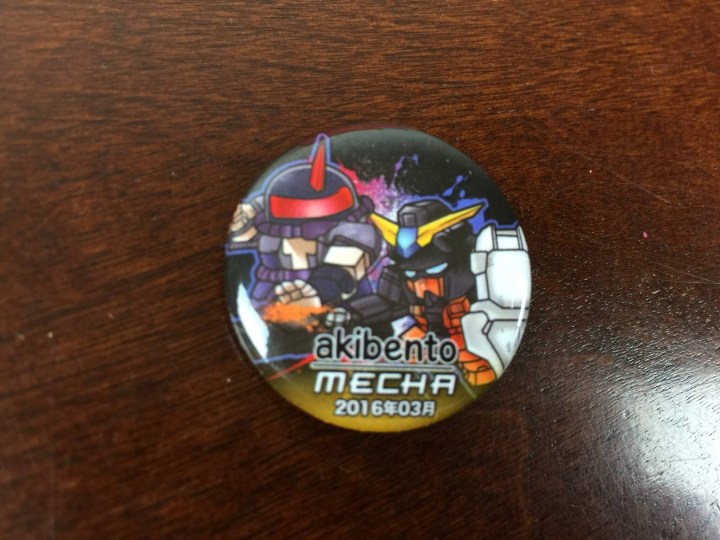 A fun way to show your geekiness, the Akibento pin depicts two mechas in almost a chibi form (cute mechas?) and the name of the box, theme, and the year and the month of the box with Japanese kanji. 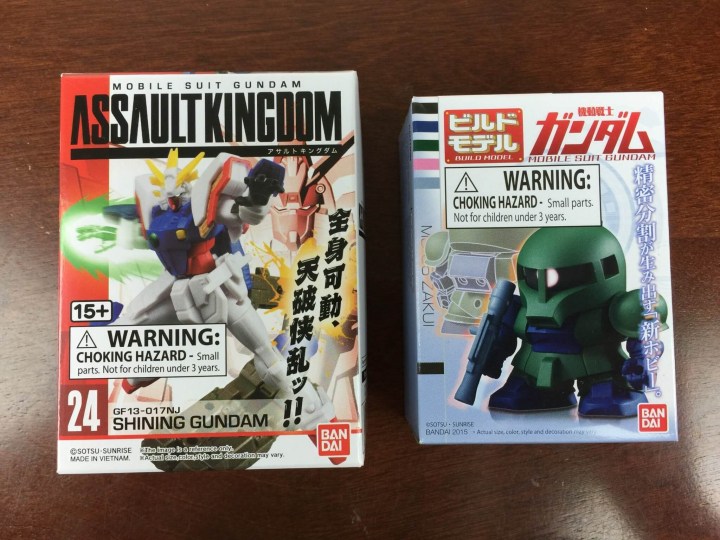 The box’s first offering was 1 of 8 possible mecha-themed figures; our box contained the Shining Gundam. The Assault Kingdom is a line of candy/toy action figures produced by Bandai and include a toy and usually a piece of gum. This particular figure appeared in Assault Kingdom’s Series 6 and is from the mecha series, Mobile Fighter G Gundam. The vast Gundam franchise started in 1979 and was cited as being the first to define what a true robot or mecha anime was. A war drama, Gundam focuses on its characters fighting with their mecha and deals with the politics, philosophies, and other considerations that accompany war. Humanity is not forgotten however, and the values and point of views of all sides, as well as the general evolution of mankind, is handled as well. Mobile Fighter G Gundam was the first series in the franchise to be set in a new timeline and follows the adventures of a people who now live completely in space colonies due to a ruined and uninhabitable Earth. Rather than wars, the various colonies meet every 4 years for a Gundam Fight. Each colony offers up a mecha and pilot to fight to the end, with the victorious colony winning the right to rule for 4 years. 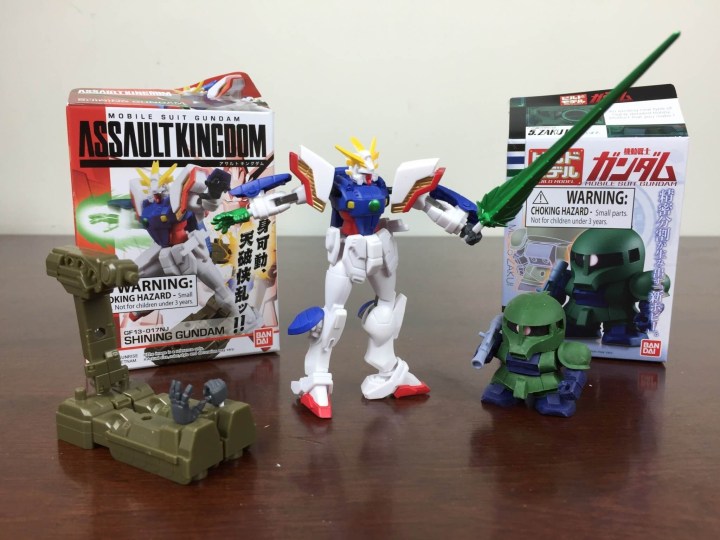 Bandai Hobby Candy Volume MS-06 Zaku I ($4.32) A random figure of a possibility of 5. Ours was a figure named Zaku 1 from the first series in the Gundam franchise. This particular Gundam was a steady antagonist type in Gundam and was reworked a couple times within the franchise. The figure is a chibi version and is made of a sturdy, yet slightly pliable material. Since the temptation to play with this little Zaku will be great, let me warn you that the connecting pieces have an easy tendency of separating if too much love is bestowed upon this tiny mecha. 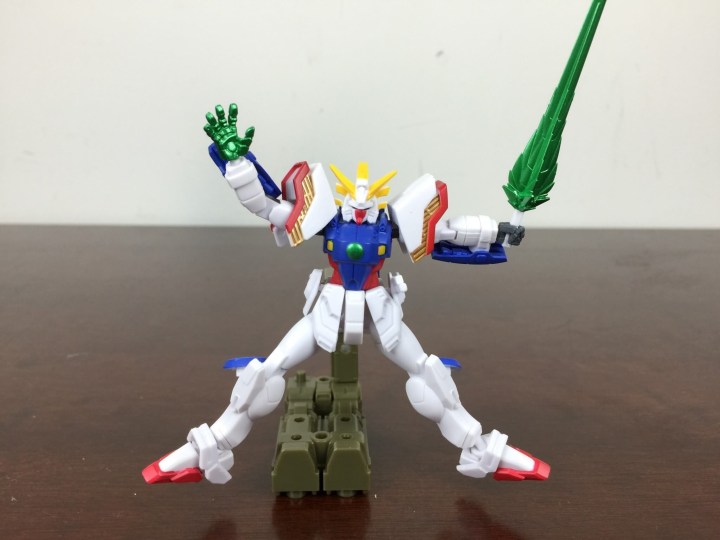 The Gundam version of a happy dance!

The Assault Kingdom figure is the Shining Gundam, piloted by the story’s main protagonist. According to some sources, the figure is in Super Mode, however I was unable to confirm that. The figure is highly dexterous, with many joints allowing for a wide range of poses and comes with a base to allow you to display your creations.

Removable hands allow the figure to hold an included sword, but be careful here as the hands are very small and can be difficult to attach. The assembly instructions are printed on the inside of the box (bad news if you wanted that intact), however they are still reasonably readable just by looking in the top. All in all, this is a very nice, adjustable figure for its size. 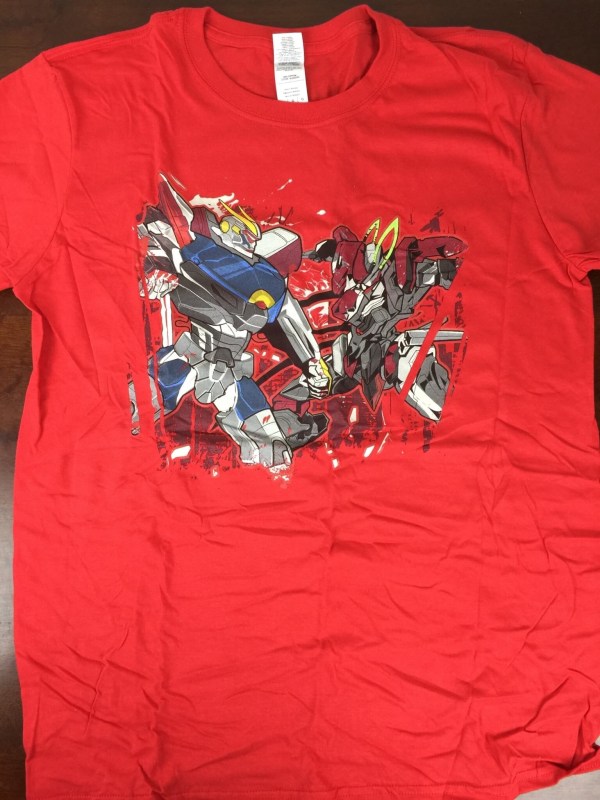 Akibento Mecha T-Shirt: The shirt included is a quality Gildan that artistically depicts two mecha in battle and as though they were ripping through the front of the fabric itself. The info card included in the box seems to show more of a maroon-colored shirt however our item was a bright red. 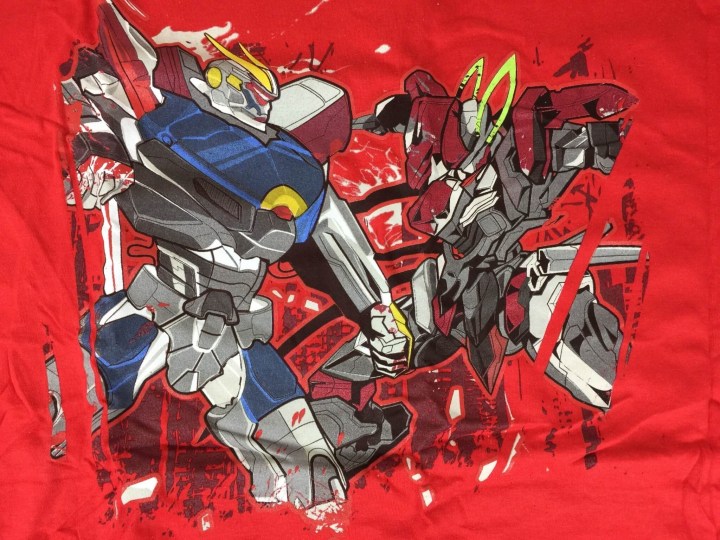 The mechas look to be from the Gundam franchise, however searching for their exact identity did not turn up any solid clues. The shirt was a little petite for a Large and it is recommended that a larger size than is typically worn be ordered. 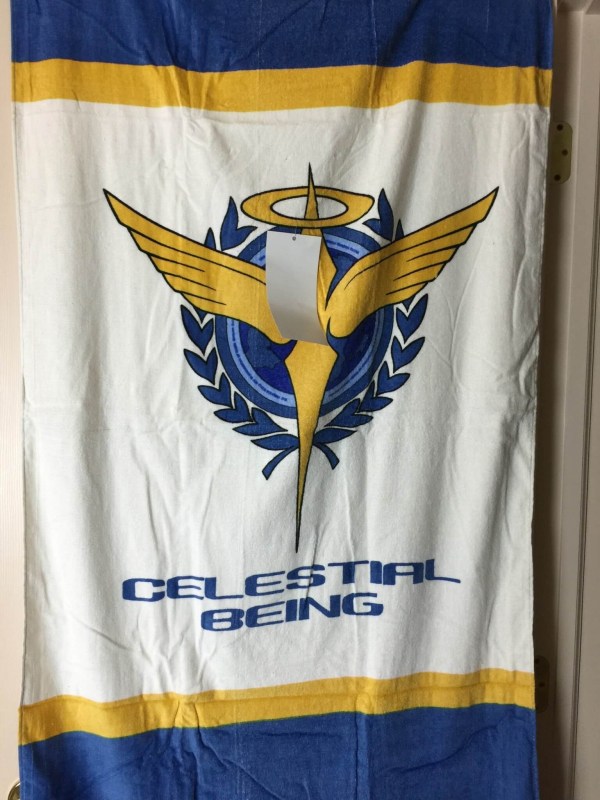 Mobile Suit Gundam Celestial Being Towel  ($17.99) The next offering from our box is a substantial towel also honoring the Gundam franchise and once again, we had the possibility of 1 of 6 possible designs. Our towel proudly displays the logo for the Celestial Being, thus placing it solidly within the Mobile Suit Gundam 00 series. Set much later after Mobile Fighter Gundam G, this series opens upon an Earth depleted of all of its fossil fuels and powered now only by solar power. The energy is controlled by three organizations representing three countries or groups of countries with the remaining world left to fend for itself. Wars break out over lack of resources and the total ruin of some countries that relied upon the sale of fossil fuels for their economy.

Into the midst of the carnage and chaos appears Celestial Being- a paramilitary group founded 200 years prior to the storyline, and who exist to stop war and unite humanity via the use of highly advanced Gundam units. The story follows their adventures as they attempt to realize their goal of world peace.

The towel itself is a soft terry material on the side of the logo while the reverse is a plain backing. The material is thin, but the large size of the towel more than makes up for it.  Use it for drying off your divine bod, or hang it decoratively- either way, this is pretty nice item for a die-hard Gundam fan! 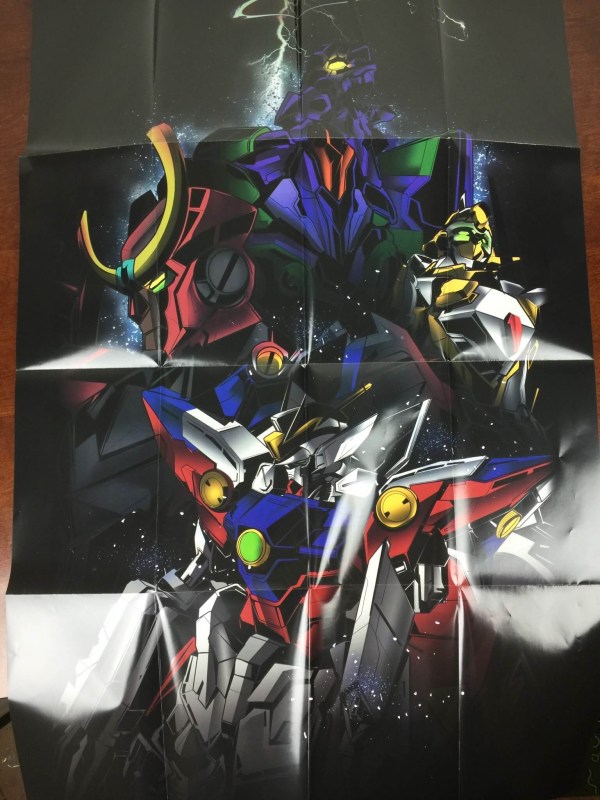 Visit Akibento to subscribe or find out more! Save $3 on your first month! Use coupon code  ANIME.

The Subscription: Akibento
The Description: A monthly box of epic gear for Anime fans! Our goal is to bring the most authentic and original figures, collectibles, manga, apparel, accessories and more to our customers worldwide in our monthly subscription box.
The Price: $29.95 per month
See Akibento in the Hello Subscription Box Directory!
The Categories: Special Interest & Fan Subscription Boxes. Subscription Boxes for Anime & Manga Fans.
The Reviews: See all our Akibento Reviews.
Prev
Next 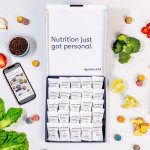 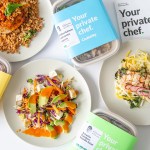 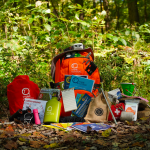 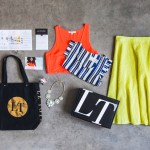