Bokksu is a premium snack box that features authentic Japanese snacks, as well as a tea pairing to go with it. There are two levels to choose from: Classic Bokksu ($44.99 USD) includes an assortment of 20-25 premium Japanese snacks and a tea pairing; Tasting Bokksu ($29.99 USD) includes 10-14 premium Japanese snacks and a tea pairing. Both boxes offer a discount for longer terms. The snacks sent are not easily found outside of Japan and this subscription ships internationally from Japan. Shipping is already included in the price. I am reviewing the Classic Bokksu.

Other Japanese snack subscription services use mass-produced mainstream snacks that can be readily found in most Asian markets outside of Japan. Bokksu directly sources its artisanal snacks from local snack makers in Japan (some of whom have been around for over 200 years!). We only curate high quality and gourmet snacks, never filler items. We are also the ONLY service that handselects a tea pairing for each box to complement that month’s flavors.

DEAL: Save $5 on your first box with coupon code HELLO.

NOTE: Your first box will be the Seasons Of Japan, shown here.

What a beautiful box! This box shipped from Japan at the beginning of April, but due to the pandemic and restrictions imposed by that country, it was in limbo somewhere and I didn’t get it until the end of June.

When I opened my box I found a card on top.

May’s theme is RAINBOW BIRTHDAY. I am always impressed with the booklet that is included in the box, there’s so much info inside! Both levels of Bokksu come with this booklet.

I love the picture of all of this month’s snacks on the right.

This picture shows which snacks are in the Classic or Tasting boxes.

We learned a couple of new words.

Each product was shown and even listed which part of Japan it originated from, brand name, common allergens, and a description.

A map of Japan shows us exactly where each snack originated.

For an interesting twist on “Meet the Maker”, we learned about the founder of Bokksu!

You can find Bokksu on several social media platforms.

The back of the mini mag had info on how you can earn points plus a glimpse at the June box theme!

The box is always packed to the top!

Everything in the May 2020 Classic Bokksu!

Showa No Yoshoku Shittori Ham Katsu Senbei I wasn’t sure about this snack at first because they were kind of clumped together. The texture isn’t what I would expect from a cracker, more like a pork rind but softer. The flavor, however, was amazing, sweet and salty and umami. I could taste ginger for sure. Turns out “shittori” means moist rice cracker!

Mike Popcorn: Butter Soy Sauce Flavor Now popcorn is something I am familiar with but this one takes it a step further by adding some soy sauce to the butter. It reminds me of when my sister would put seasoning salt on fresh buttered popcorn, with a hint of spice but nothing too strong.

Aji Curry are wheat and potato puffs that have a light curry flavor, which has just a hint of heat. I liked it more than I thought I would but even more surprising was that my daughter loved them!

Handmade Itotemari Candy Mix Aren’t these tiny candies beautiful? They are supposed to look like a children’s toy and they have different flavors, depending on the color. I tried the rainbow striped and it was fruity and sweet. According to Bokksu the flavors are “peach, mikan, grape, melon, quince, and more”.

Funwari Baumkuchen: Milk And Matcha I wasn’t expecting to find a cake with a German word in the name but baumkuchen means tree cake! You can see the rings, just like a cross section of a tree trunk. The yellow part is milk flavored (or plain pound cake to me) while the green part has a delicate matcha flavor. You can even separate the rings to eat each piece individually, or just bite into the whole thing like I did.

Funwari Meijin Mochi Puffs: Kinako Kinako is roasted soybean powder and these light as air puffs are covered in a sweetened version that has a nutty hint that reminds me of peanut butter. It melts as soon as it hits your mouth.

Kaju Gummy: Peach Gummies are one of my daughter’s favorite snacks, so most of this pack went to her. The candies are shaped like peaches and have that classic peach candy flavor that I think most people would recognize.

Kuroi Kinako-San Dango Mochi These mochi are soft and gelatinous and are flavored with a Japanese black sugar syrup. The outside is covered in more kinako soybean powder and the mochi is sweet and chewy.

Black Sesame Cookie What a delightful flavor in these not too sweet cookies! The cookie itself is a buttery shortbread version but the black sesame seeds add a unique nutty flavor that would be perfect paired with tea or coffee.

Sakura Cake I can’t believe I didn’t get a picture of the little pink cake, I think I was thrown off by the little extra that was on top and it turns out it was a whole cherry blossom! The cake flavor was delicate, I don’t think it tasted like cherries or flowers and the texture was good, similar to the matcha cake shown earlier.

Koganeimo Golden Sweet Potato Cake was the best cake of this box, the texture was super moist and the flavor was buttery, plus it has sweet potato in the batter. I didn’t pick up the hint of rum but maybe it evaporated on the epic trip to my home.

Kinako + Black Sesame Milk Latte has more of that kinako (roasted soybean) flavor, but this time in a drink mix. There is also some sesame in here according to the name. I am having a hard time describing this so I will do my best. You place the powder in a cup and add 3 ounces of hot water and stir. If you want you could mix it with mostly cold water and put it over ice. Three ounces isn’t a big drink at all by the way. I guess it’s a little like hot chocolate (think Swiss Miss instant) but without the chocolate. It’s sweetened and creamy, so maybe hot white chocolate?

Chocolate Azuki Beans: Uji Matcha are candied red beans with a matcha flavored white chocolate coating. The beans are sweet and squishy, kind of like a gummy bean, and the matcha flavor is mild.

Candied Yuzu Peel is one of my favorites, it is so good! It is simply candied yuzu peel and is sweet and sour, kind of like a cross between a lemon and orange.

The May Bokksu was a feast for the eyes as well as the palate! I love that they have found a way to bring back past favorites (candied yuzu peel, peach gummies) while introducing new goodies that deserve a place in future boxes! The rainbow birthday theme was adorable and even though my snacks were stuck in limbo somewhere they all tasted fine and were in great shape.

What’s your favorite snack from this month’s box?

Save $5 on your first box! Use coupon code HELLO. 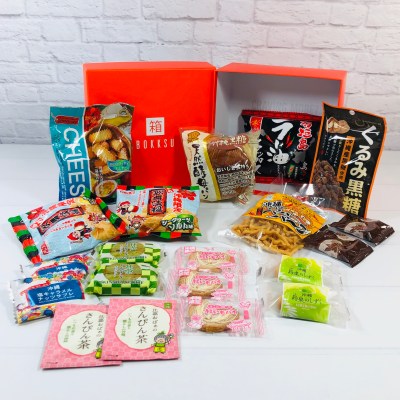 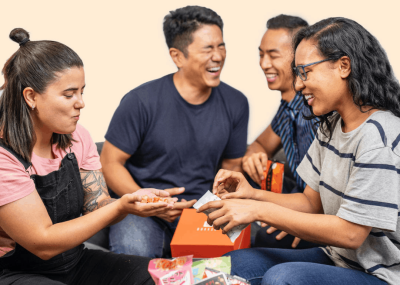