This month’s theme is BLUE!

Some of the items came in plastic packaging, while others came in their original boxes.

There’s a card with a QR code that we can use to learn more about this crate.

It comes with a lanyard so I can easily bring it wherever I go.

It also has a base plate that makes it easy to use as a ruler, or as a protractor for measuring map angles.

Thor Light Up Keychain. The God of Thunder’s weapon is featured on this box, in the form of a keychain and it even lights up!

The Mjolnir light-up keychain can be easily attached to your keys or even to your bag.

The best part about this keychain is that it lights up, and the light is perfectly placed on the image of Thor’s hammer like it was struck by lightning and ready to strike at the enemies!

Yondu Survival Whistle. Yondu is the leader of Ravagers, and he played a very important part in Peter Quill’s life as his adoptive father, so just imagine how important survival is to him!

Summon your own helpful Yaka Arrow with the Yondu Survival Whistle! Made from advanced Centaurian technology, this 122dB aluminum alloy whistle is great for camping, hiking, and intimidating subordinates!

The survival whistle also has a key ring so I can easily keep it with my keys, or attach it on one of the zippers of my bag or pouch.

The whistle has engraved symbols on one side. Yondu also controls the Yaka Arrow using a whistle!

The bottom has the comic book image of the superhero. He’s surrounded by the words honor, courage, sacrifice, and loyalty.

The bowl comes with a lid designed like his shield, and it also comes with a carabiner that will make it easy to bring along anywhere!

You can put soup or any saucy food in it then keep them for later with the lid!

The box has the Beast’s insignia printed on it, so this item features the mutant!

The bottom of the mug features the popular ‘X’ sign, and information of where and whom to return it when found.

It’s a cool blue mug with the design printed in white, and there are specks of white all around it too.

It features the Beast drinking from a cup, and he’s inside a symbol of a chemical compound.

We can see Dr. Strange here performing magic by doing his popular magic circles accompanied by other shapes such as triangles.

The design is cool, but I am not really sure about the shirt’s material. The shirt is fairly thin and it easily gets wrinkly, and the bottom hem was only serged.

The last time I got a RED box, and this time, I got a box in BLUE! Of course, I know this box will feature Marvel characters who are blue or have blue costumes, and they delivered! I really like that they included X-Men’s Beast and Yondu from Guardians of the Galaxy. The two Caps are also present in the box, Captain Marvel with a compass, and Captain America with a cool collapsible bowl. Thor is also included with his hammer Mjolnir, and it even lights up! The design on the raglan shirt is also cool as it features Dr. Strange performing his magic spells. I am expecting another color-themed box form this subscription, and I wonder what color it will be! 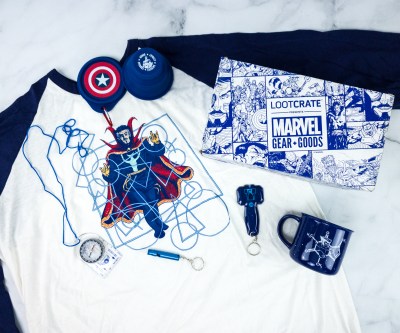 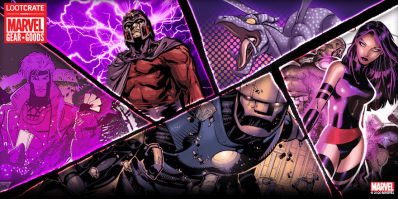 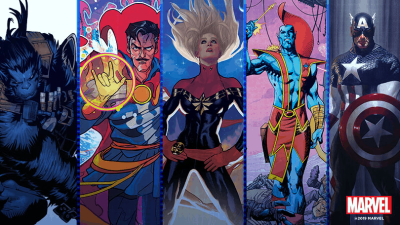