Atlas Crate is a monthly subscription from KiwiCo that specializes in geography and culture for children between ages 6 to 11 years old. This box is designed to spark kids’ sense of adventure and curiosity, inspiring them to see themselves as citizens of the world. Kids can see and connect with the rest of the world, helping them grow beyond their own experience as they explore the globe.

DEAL: Save 40% on your first month with this link on any KiwiCo line, no coupon code required!

This month’s box is all about GERMANY!

Upon opening, we are welcomed by the cards and pamphlets that are essential to the activities. This subscription emphasizes learning through creative play as they provide in this box everything the kids might need. It builds a sense of adventure, an appreciation of other cultures, builds a sense of global citizenship and opportunity for parents and grandparents to bond with children.

Every flap of the envelope has information about the box. We are also given a beautiful surprise of trivia cards filled with fascinating facts and photos.

We are also introduced to Anya the cricket and Milo the sandpiper.

Also included is the Atlas Quest, which you’ll need to fill out after exploring the country!

You can explore more online after you get your box with additional activities and book suggestions! Atlas Crate recommends This is Munich and An Illustrated Treasury of Grimm’s Fairytales.

Missed our first review? You’ll get the rings in your first box, which will always start with the WORLD crate. Check out that review here!

Each month, we get a sticker that represents this month’s featured country which is Germany. This sticker features one of the most famous German folk dance, the Folkies!

We placed all the stickers we got on the Adventure Book, along with the other countries that we have already explored!

The table of contents is on the edge of the page for easy reading, just like how a travel book works. 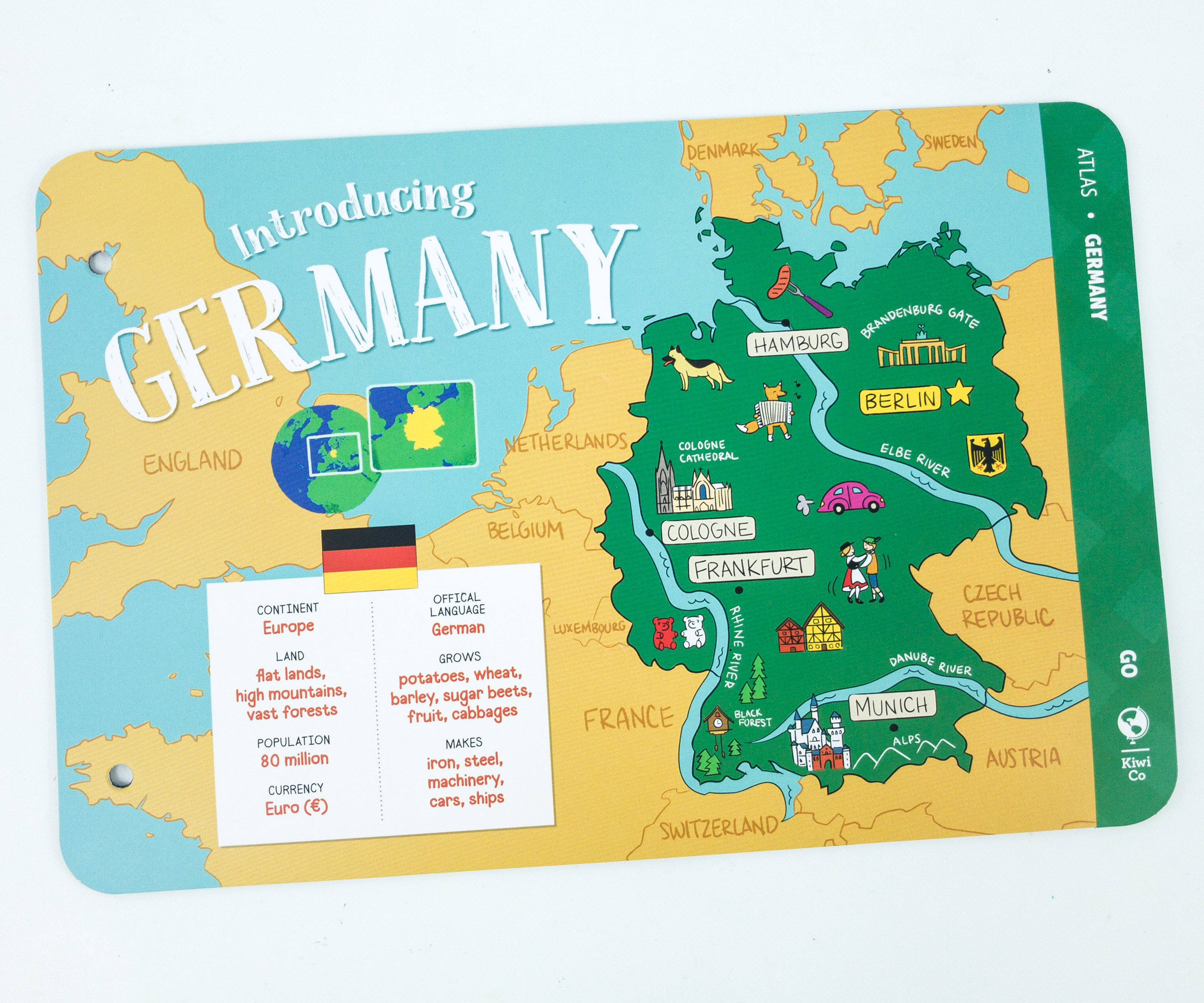 This booklet also comes with a cute illustration of the country map with fast facts and some fun drawings of Germany’s notable events, sports, places, or products from that particular location.

These pages feature the beginning of the adventures of Anya and Milo in Germany.

One of their first stops is Neuschwanstein Castle, located on a rugged hill above the village of Hohenschwangau near Füssen in southwest Bavaria, Germany. This palace was primarily built to fulfill the fantastic dreams of King Ludwig II.

This part of the booklet features the famous world-class musician who is also considered to be a hero in Germany, Ludwig Van Beethoven!

Here’s a brief article about the meaningful life of the famous musician. Featured on the other side is also another famous folk dance of Germany, the Schuhplattler. It’s a dance you can hear and see, as the dancers clap and slap their legs and feet, and they constantly make the beat as loud as the drummer.

This month’s featured recipe is Brezein or Pretzels. It’s actually a national symbol! When you see one above a doorway, you’ll know that’s a baker shop!

To make it, you’ll need dry yeast, water, white sugar, all-purpose flour, salt, egg, cinnamon, and sugar. They also included complete instructions on how to do this delicious pastry recipe!

For this month’s Atlas Crate projects, we’re making a Car & Launcher and our own Fairy Tales!

Activity #1: Fairy Tales. For this activity, the crate provided us with fill-in-the-blank books, pencils, woodblocks, and word stickers.

Featured at the back of this book are some facts about Grimm’s Fairy Tales.

A lot of the classic fairy tales we know and love are called Grimm’s Fairy Tales, that’s not because Jacob and Wilhelm Grimm wrote the stories. Instead, the two brothers collected the stories that had been told and re-told for generations in Germany. Today these stories are known as Grimms’ Fairy Tales.

Also included in this sheet are the detailed steps on how to make the Fairy Tales!

We started the project by peeling off the colored stickers and sticking them on each side of the wooden blocks.

To play, fill up all the blanks by rolling the corresponding color of dice asked in each sentence.

Here, my son rolled the dice while my daughter filled up all the blanks.

To be more precise, make sure to use the correct color of wooden block!

Using the provided color pencils, kids can make an illustration of the story presented on each page.

Once you’re done filling the blanks and drawing your illustrations, you can also read the fairy tale story out loud to your family and friends!

My kids have made a new version of The Frog Prince, and it’s called The Frog Baby! 👶👶👶

Activity #2: Car & Launcher. The next project is the Car & Launcher, a multi-stage activity that needs you to build a base, car, and accelerator.

Featured at the back of the booklet are some fun trivia about Autobahn!

In building the base, we used a wooden base, small and big wheels, sticky foam shapes, slider, and rubber bands.

As always, the instructions provided by the booklet are well-detailed. It even includes pictures and some pointers where you can double check if you made the right procedure.

Here’s what the project should look like once finished!

Find the base pieces with their corresponding marks and put a U-stickers above each of the four notches, then connect it to each other until you form a square-shaped base.

Position the slider with the slightly curved edge on the top, and gently press the arms that pokes out into the opening in the piece B. Hook a rubber band on the bottom part of the slider and loop it around the wood wall.

The most important parts are the car frame and panel. You should make sure that they are properly placed based on the instruction manual, and lock them up by adding the paper sticks and the wheels on both sides.

You can customize your car panels using colored pencils and stickers. Use them as decoration to further improve the design of your car.

Here’s everything that we’ve accomplished from this month’s box!

This month’s Atlas Crate brought us to another fun and exciting place, Germany! My kids enjoyed everything in this crate, from the booklet, to the recipes, trivias, and astonishing projects which has a great relation with the featured country. My children have learned a lot of awesome things about Germany, like their famous folk dances, singer-composer, and story tellers. We were also able to study learn how to make a delicious pretzels. All in all, it’s a one amazing adventure to Germany, and we’re really excited where to go next!

What do you think of KiwiCo’s Atlas Crate?

Visit Atlas Crate by KiwiCo to subscribe or find out more!