Charmed: Box of Shadows is a licensed quarterly subscription box filled with exclusive Charmed products celebrating the original series. The box is $49.99 per quarter, less with an annual plan. Box of Shadows will include apparel, accessories, collectibles, jewelry, home goods and more.

The box takes the form of the family’s Book of Shadows! I love it! Also, every box includes an information booklet/mini-magazine titled The Bay Mirror.

The theme of this box is Phoebe Halliwell!

The booklet lists all the items in the box and tells a little something about them.

You can get to know more about Phoebe or test your knowledge about her through the Phoebe Pop Quiz included in the booklet.

There are articles, important occasion dates, and pages for this month’s featured sister, Phoebe!

It’s about an inch tall, and it shows the characters, Billy Appleby (which is also Phoebe’s first love) and Sally Mae.

“The Amazing Phoebe” Poster Print. Phoebe had this short stint in the show where she worked as a psychic consultant in a hotel. Wayne Adams did a great job capturing all the details on this poster, which perfectly resembles the one used in the series, and there are those cute seahorses on the side too!

Phoebe 8X10 Portrait. I really admire the actress who plays Phoebe, and this is a nice portrait showing her! Alyssa Milano played the part really well, and this picture better be framed to honor her job well done!

Golden Mermaid Microfiber Towel. Phoebe once ran away from her life and found solace in the ocean as she turns into a mermaid. This towel’s here to remind us all about that episode in her life!

The towel is quite big and is really absorbent. It’s the perfect towel to bring on your next trip to the beach, you really can’t just ignore the call of the sea!

“The Bay Mirror” Mug. Of course, Phoebe worked for the Bay Mirror, so it’s just right to pay homage to it by including this white mug with red prints on. Well, anyone who works hard deserves a warm beverage to keep them going!

“The Amazing Phoebe” Answer Ball. Phoebe will still be your psychic consultant with this Answer Ball!

The ball is placed inside this chic pink box!

Remember the Date Ball? It works exactly the same! Ask a question and let the ball answer it for you by giving it a slight shake.

Then, look at the window on the other side that reveals your answer! It works like a dice with different faces, and instead of numbers, answers written on each face.

Halliwell manor Miniatures: Phoebe Halliwell. To add to our manor, finally, we got Phoebe!

Like most of the characters in this miniature manor series, the figure can stand on its own.

While Leo and Piper stayed in the kitchen, Phoebe is up in the attic, looking at the Book of Shadows!

It’s another box that pays tribute to the sisters, and they finally featured Phoebe! The items definitely made me feel nostalgic and want to re-watch the series all over again, as they reminded me of some good episodes. I love that the manor is getting more interesting with the addition of two of the sisters. Phoebe is a fun character in the series, and we certainly love her! The Charmed ones are yet again rejoicing for this awesome box that’s full of Phoebe and stuff that represent her!

What do you think of this month’s Charmed: Box of Shadows?

Visit Charmed: The Box of Shadows to subscribe or find out more! 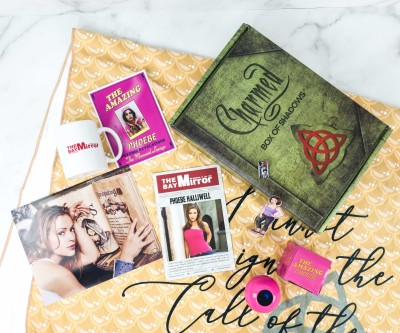 Charmed: The Box of Shadows Coupons 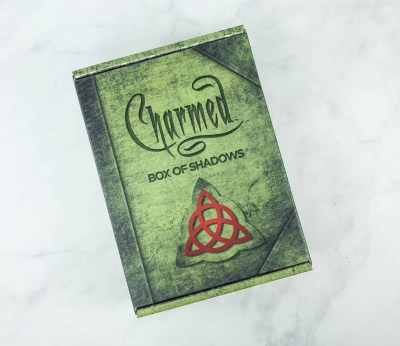 Charmed: The Box of Shadows Spoilers

Charmed: The Box of Shadows News

Charmed: The Box of Shadows