Charmed: Box of Shadows is a licensed quarterly subscription box filled with exclusive Charmed products celebrating the original series. The box is $49.99 per quarter, less with an annual plan. Box of Shadows will include apparel, accessories, collectibles, jewelry, home goods and more.

The box is powered by FanMail (now closed).

The box takes the form of the family’s Book of Shadows! I love it! #IAmACharmedOne 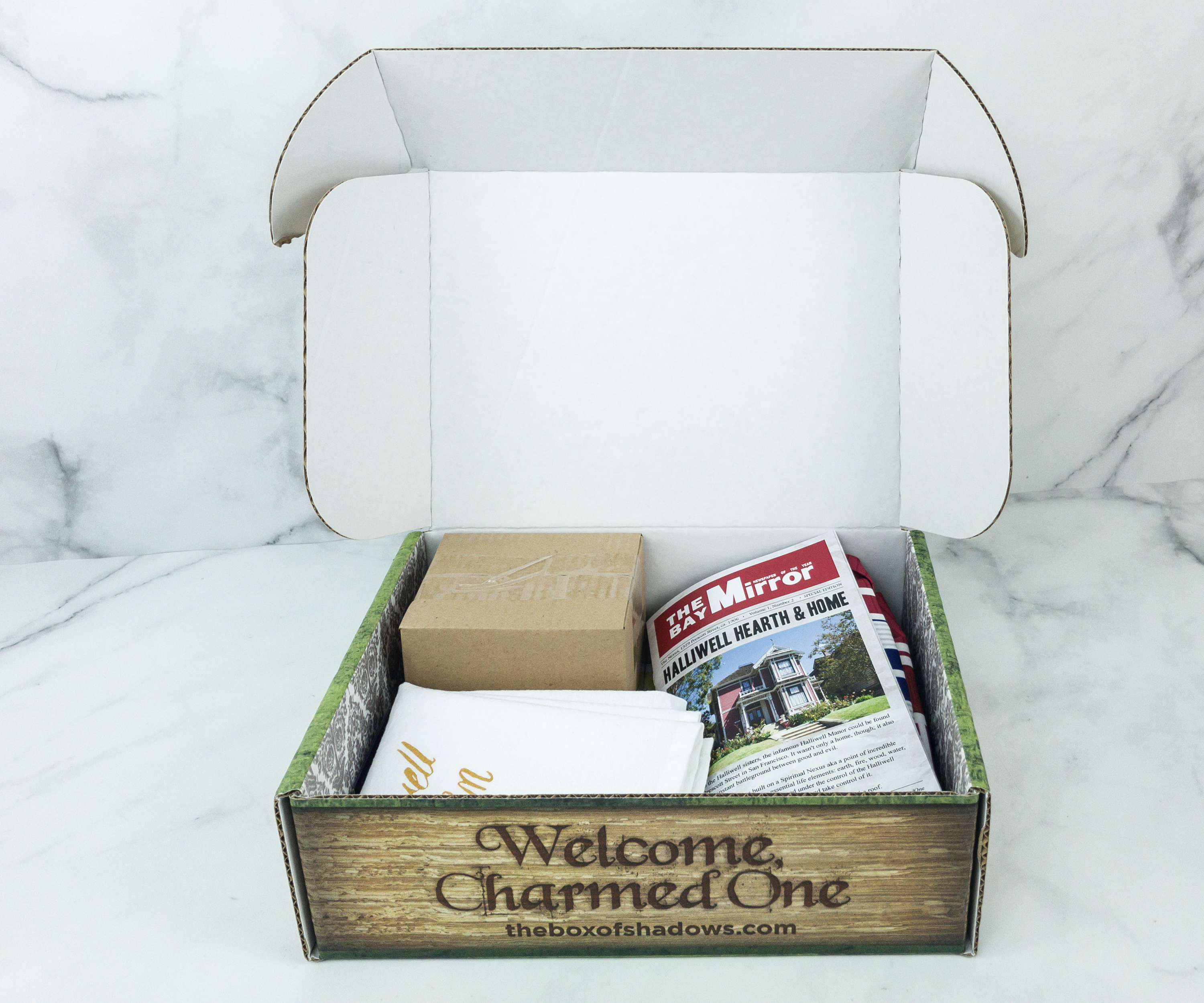 The theme of this box is Halliwell Hearth & Home!

The booklet also lets you know about the Halliwell’s humble abode.

The booklet lists all the items in the box and tells a little something about them.

There are articles, important occasion dates, and pages for fans to ask one of the Halliwell sisters, Phoebe!

“Halliwell Manor: The Day The Magic Died” Artwork by Aun-Juli Riddle. Juli is a big Charmed fan, and the curators made sure that she’d paint the manor, and make a version that every Charmed fan can display in their own homes. It’s numbered, too.

“To The Halliwell Manor Born” Tea Towel. The curators also included something that can be used at home, and it’s a tea towel.

The phrase printed on the towel is the best way to commemorate the Halliwells. The phrase was originally from Shakespeare’s Hamlet, and it’s “to the manner born” and it evolved to “to the manor born” which means born in a prominent house or family.

The towel will look good hanging on the kitchen cabinets. I also love the look of gold colored font on the white towel.

“Prescott Street” Tin Street Sign by FanMail. The Halliwell Manor is situated on the fictional Prescott Street, and here’s a tin street sign to help others locate the beautiful home.

I won’t be placing it outside the house, but I think I can place it at my room’s door, just to have that “Halliwell”-feel. It measures 2.4″ x 9″.

Kit’s Collar Bracelet by FanMail. Kit the cat is the Halliwell’s favorite feline companion, and this adorable bracelet is to pay homage to the beautiful Siamese cat.

The bracelet is placed inside an elegant black box.

The bracelet resembles a soft red leather cat collar, with a Triquetra, or a trinity knot, gold charm.

There are also gems embedded around the leather bracelet.

It’s big enough to contain a lot of stuff, it also looks beach-perfect to me!

I actually love how they represented the magical Manor on this cool bag!

It also has a zipper enclosure, making it a good containment for important stuff.

The handles have the right length, it’s not too short and can fit my arms when I just want to sling the bag on my shoulder.

“To The Halliwell Manor Born” Mug. This mug has the same writing as the tea towel but instead comes in black with the phrase printed in white, which is the exact opposite of the towel.

A real “Charmed one” will be very proud to show this off to guests, and that’s what I’m going to do! The cup and towel are designed by Jordandené, a Brooklyn-based woman-owned company that promotes nerd culture, positivity, and girl power, just like the Halliwells!

Halliwell Manor Miniatures: Kit The Cat by Tziporah Thompson. Here’s another item to commemorate Kit, the Siamese cat. It’s a miniature in addition to the Halliwell Manor miniature that I got from the first box!

It is made of acrylic and comes with a base so it can stand on its own and look like a 3D item.

Here’s the beautiful kitty attached and being supported by its acrylic base. My hubby didn’t understand to remove the brown paper on the bottom of the stand, whoops!

There’s Kit standing next to the Book of Shadows!

You can also place her on top of the book, making it look like she jumped her way up there!

Another “Charmed” box and it makes me want to binge-watch the show over and over again. The first box got me thrilled about the Miniature Manor, and now, I can see where I am going, as they now included the beloved cat! Also, I love the adorable kitty collar bracelet, and it’s in a really hot red color too with the popular Triquetra charm! The box definitely relives the fantastic series, and I am looking forward to more “Charmed” items in future boxes. It’s really a subscription curated with Charmed fans in mind!

What do you think of January 2019’s Charmed: Box of Shadows?

Visit Charmed: The Box of Shadows to subscribe or find out more!

Charmed: The Box of Shadows Coupons

Charmed: The Box of Shadows Spoilers

Charmed: The Box of Shadows News

Charmed: The Box of Shadows