You Matter Box is a new box full of encouraging items for ages 10-22 that is curated by a school counselor.  Expect to receive uplifting items that show that “they are loved, they are important, and they matter.”

We are on a mission of change to rewire young brains for positivity.

The April theme is “The Five Sense.” The information card described the theme and how the items fit with the theme.

Here are the items in the April You Matter Box. My two sons, 19 and almost 10, gave me their opinions on the box. I still would like to see an educational letter to the parent explaining how the items in the box will help “rewire young brains for positivity.”

Who knew bubble wrap would be a big hit? Both our 9 nine-year-old and 19-year-old son enjoyed popping the emergency “Stress Relief” poppers (appx $1.50) which represented touch. My younger son now comes up to me and asks for stress relief bubble wrap!

He is now a fan of shower steamers. He also felt it made more sense that it was a steamer and not bath salts because he doesn’t take baths anymore. However, he does take multiple showers a day because of sports and working out.

He also claimed the You Matter Mug  (appx $5.00) for himself because he liked the uplifting message. It was the right item for the box.

He then took the Land O Lakes Chocolate Supreme Cocoa Classic (1.25 oz, appx $1.00) with him to his internship. He was thrilled to make himself hot chocolate on his break. He enjoyed his taste item. Single-use drink items are always a hit with him.

J, age 9, was excited to have his first speaker. The Quil-cell Sound Cube Bluetooth Speaker in Red ($6.03 Amazon) works with both Android and iPhone.  It has four hours of playback time and is the sound item.

T liked the therapeutic activity. The Five Senses Mindfulness Exercise helped him slow down his mind and refocus.

I still have mixed feelings about the box. As a parent, I am again not making the connection on how the items in the box fit into the mission of the box which is to “to rewire young brains for positivity.” However, both of my children liked the box. T liked it the most and thought his friends would like it too. A curator letter to the parents explaining how it all comes together to create positivity would be helpful. I did appreciate having a second look at a box designed for their age group that addresses their self-esteem and encourages them, although this box may be better suited to those with children who are feeling alone, depressed, suicidal, and threatening or engage in self-harm.  It is a unique box for parents and children that are looking to address the stressful situations that are facing our children today by using encouraging items.

What do you think of this new subscription?

Visit You Matter Box to subscribe or find out more! 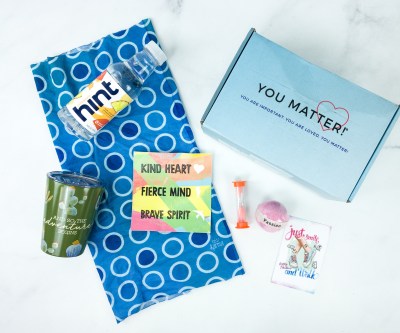