HalfBloodPrints is a monthly subscription service that brings beautiful fandom artwork you can display at your home. The subscription costs $12 per month, and you’ll receive an 8×10 art print, a bookmark, a calendar magnet, a custom sticker, and a lot more surprises. There will be a different theme every month and are based on famous books, TV shows, movies, etc.  A premium subscription is also offered for $22.50, where you’ll get a monthly shirt included!

The subscription now has different options for subscribers. Aside from the regular box and premium subscription where you can get a monthly shirt on top of the regular sub, they are now also offering the following options:

The regular subscription comes in a poly mailer (the colorful bag seen in the first picture above). The art is contained in a paperboard folder with an additional backer, so it remains in pristine condition.

The fandom of The Office will certainly be thankful for this box!

Everything in my HalfBloodPrints box!

Button Pin. The two pins feature Scott’s Tots and the face of Prison Mike (in his acting tough expression), played by Steve Carell. The first pin is in reference to a hilarious episode where Michael Scott promised the kids that if they graduated from high school, he will also pay for their college tuition. Hence the sign, Scott’s Tots. It was the exact design of the kid’s t-shirts when they welcomed him at the school only to find out it’s an empty promise. The second pin is when he wore a purple bandana to pretend he’s the character, Prison Mike, to sort out employee squabbles.

Each piece has a copper-colored pin at the back which secures it perfectly in place.

Limited Edition Fandom Trading Card. Dwight Schrute is a funny character in The Office, played by Rainn Wilson. He lacks social skills and sometimes common sense but forms an effective sales team with Jim Halpert (played by John Krasinski), even though they dislike each other as well.

You couldn’t handle my undivided attention.

Good job from Jessica Patrick of Mooncrab Designs. The resemblance between the Dwight Schrute’s character and his portrait in this card is uncanny. Even the expression is spot on.

T-Shirt. In one episode, Jim Halpert played by John Krasinski decided to prank Dwight Schrute by imitating the latter from his mannerisms and just saying these words “Bears, Beets, Battlestar Galactica” even though it’s out of the conversation. Those are the only things Dwight is interested about. That bit was so funny!

I immediately remembered that episode because of this t-shirt. I love the color and the design. It has a good fit too!

Full-Color Bookmark. This is the show’s logo which is a fitting design for a bookmark.

Froggy 101 is a radio station. Dwight has a sticker sign just like this on his desk and can be seen multiple times throughout the show.

Art Print. I love the painting-like art print of Dunder Mifflin. Michael Scott hung a real picture version of it on the wall of the office. Its caption, on the other hand, happened in the season finale and it is so relatable and struck a chord with people that it became viral. It was uttered by Ed Helms who plays the character of Andy Bernard. He was reminiscing about how his best times were working in Dunder Mifflin even though he thought he already had his dream job at Cornell. It’s a good art print to stick to your wall for inspiration every day.

Postcard. Speaking of quotes, this one came from Wayne Gretzky and was borrowed naturally by Michael Scott. It’s written like this on his whiteboard like what you’re seeing as the design of this postcard.

We can send this one to our friends for humor, to inspire, or just for the sake of reminiscing about old episodes of The Office.

Die-Cut Magnet. Dwight Schrute has acre and acre of farmlands with a bed & breakfast and an agrotourism attraction. Naturally, beets will be in the logo. The Die-Cut magnet sticks easily and a Dwight fan would recognize this easily.

Die-Cut Sticker. Michael Scott considers himself to be the world’s best boss and bought the fitting mug from Spencer Gifts. It’s a good quality sticker. It doesn’t tear up easily.

These are the back of both the die cut magnet and die cut sticker.

The Office is a really funny show with great writers and comedians. Almost all of the scenes are ridiculous and hilarious and sometimes it does tug the heart with moments of relatable truth so it was fun to see it in this subscription! I liked that they featured Dwight Schrute and the character’s notable quotes.  I loved the t-shirt, its color, and design and the art print of the Dunder Mifflin with an inspiring quote about regrets. Every reference is so spot on!

What do you think of HalfBloodPrints? 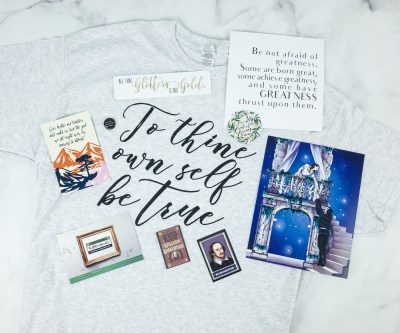