Home Chef is a meal in a box subscription – every week, you choose from a variety of recipes and have all the ingredients and preparation instructions delivered to your door. The basic concept is the same as other weekly meal delivery services, but it has its own unique features and recipes. Their meal options include many great Asian, Indian, African, and South American inspired dishes, along with more traditional American home-style and steakhouse fare.

I received a notice that my box would be shipped a day later than planned, which means I received it a day later than originally scheduled. I was home when it was delivered. When you open it up it has the recipe cards on top and special packing to keep it insulated. This is more environmentally friendly than styrofoam and is just shredded cotton clothing wrapped in plastic. You can slit the plastic and throw the contents in the trash or compost and then recycle the plastic.

Home Chef offers an incredible 10 selections available for 2, 4, or 6 people, a breakfast choice, a smoothie choice, and a fruit basket selection. Meals for your box are suggested based on your preferences, but you can change the selections any time. The portions are large, and this is currently the least expensive and has the most choice out of any similar major subscriptions (for 2 people) – $9.95 per person per selection (they typically have one meal option a week that’s a premium meal and costs a little more, though).

DEAL: Get $30 of free food when you sign up – just use this link to get the deal!

The recipe cards display prep time, difficulty, a “best cooked by” time frame, and even a spice level. There is also a list of stuff you may need from your own kitchens such as cookware and salt and pepper. You have to have a basic kitchen set-up (stove/oven, cookware, etc.), but a couple of tablespoons of cooking oil and salt and pepper are usually the only ingredients you must have at home – they even include liquid egg (instead of expecting you to have eggs on hand), and oil for shallow-frying when a recipe calls for more than a few tablespoons worth.

The recipe cards spelled out exactly what I would find in my box.

I glanced at the instructions to see what I would need to do – you can see all of this info online ahead of time too, so if it’s too hot to bake or you don’t feel like cooking at all you can choose accordingly. I found at least two no-cook meals available for each week.

The back of the card has the recipe guidance, complete with pictures and bold-facing of ingredients. The recipes are accompanied by pro-tips and explanations of cooking terminology and techniques. The prep is done in a sensible order – items with long lead times are started first. The recipe cards have pre-punched holes so you can store them in a recipe binder, so you can make it yourself if you want, or just wait until it’s offered again if you loved it.

The ingredients are separated by meal into individual bags, with the meat packed separately, and all of it was packed into a big, padded box with several ice packs. The bags used to bundle the food are recyclable but they also have a handy resealable zip closure. They stand up in the fridge, keeping everything together, and the clear side and labeling make it easy to identify which meal is which. You can reuse the ice packs for lunches or coolers, or first aid!

With two regular meals for two people and a smoothie for two, the price of the box shown was $45.78.

I wanted a quick lunch so I ordered Citrus Feta Chicken Salad – (5 minutes, 454 Calories per serving).

This cucumber is making a sad face – it must have frozen in transit and was not fit for eating. I had a regular cucumber in my fridge and used that instead.

There’s not a whole lot to show – I washed the produce, sliced the cucumber, opened some bags, and tossed it all together. If you’re eating for one then you can save half the ingredients for the next day, since the dressing comes in two separate packets. The flavor was Ok, but you could liven it up with red onions, Greek olives, or bell peppers.

I give my oven a vacation every summer, which is from May to around October here in Central Texas. So I went for Grilled Mojito Lime Chicken with Poblano Slaw (25-35 minutes, 499 calories per serving), which can be grilled outdoors or in.

I assembled all the ingredients, which also called for olive oil, salt, and pepper from my kitchen.

My poblano suffered from the same ailment as the cucumber but after I trimmed the ends and rinsed it off, I decided it was good enough to cook.

There was some light prep work involved, like chopping herbs, juicing a lime, and mixing the crema.

I also placed the slaw ingredients in a bowl and mixed them up. I would suggest mixing everything except the cabbage first, then stir it in to give the brown sugar time to dissolve a bit.

I heated up my grill pan and grilled the poblano and green onions according to the directions.

I grilled the chicken too, then brushed it with an oil and spice mix that gave it amazing flavor. After I cut the poblano I decided it wasn’t tender enough so I threw it back in the pan and shoved everything to the middle. I covered it with a lid to make sure the chicken was cooked thoroughly and the peppers were softened.

All that was left was to mix the poblanos and green onion in the slaw, plate the slaw, and place the chicken next to it. Then pour the crema over the top (I may have taken more than my fair share) and chow down. This was fabulous! The slaw was sweet and the peppers added depth without being spicy. The chicken was grilled perfectly and I wish I could get more of that spice mixture because it was so flavorful. The crema was tasty too, with the lime juice giving the meal some bright flavor. This one was a keeper and my husband liked it too!

I ordered an extra and chose the Hawaii Five-O Smoothie (5-10 minutes, 215 calories).

Not much to it, just dump the ingredients in the blender, add two cups of ice, and blend!

It made two generous servings. Unfortunately, the fruit smelled off, maybe it was the container they were in so I went ahead and blended it all up anyways, but after a few sips I ended up dumping it down the drain.

This is my second Home Chef box and my experience has been mostly positive so far! I would rather have a couple of vegetables ruined by being frozen in transport than to have to throw it all away because of warm meat, and everything was very cold and the ice packs were still frozen when it got to my house. My favorite meal was the grilled chicken, it had a bit more prep time but was worth it. I’m not sure what was wrong with my smoothie fruit though. I will probably try another smoothie in a couple of months but may stick with the fresh fruit side for the next box. The portion sizes were very generous for both meals and the smoothies.

Have you tried Home Chef? What did you think of your meals?

Visit Home Chef to subscribe or find out more!

Get $30 off over your first two boxes! Deal applies automatically, just visit and subscribe. 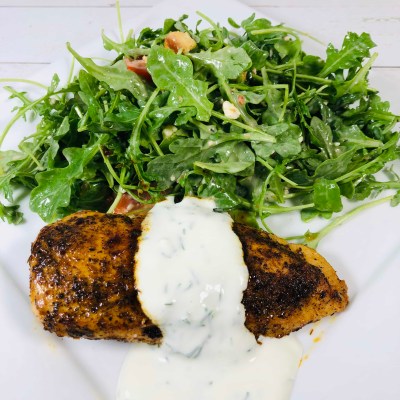 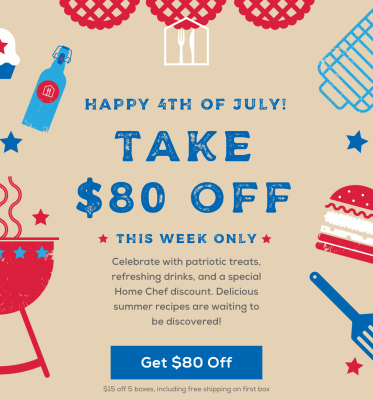 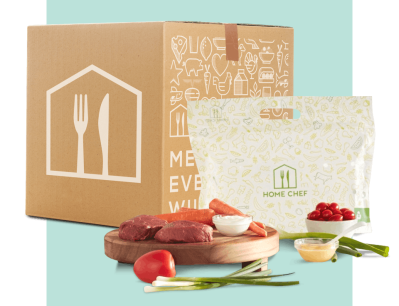