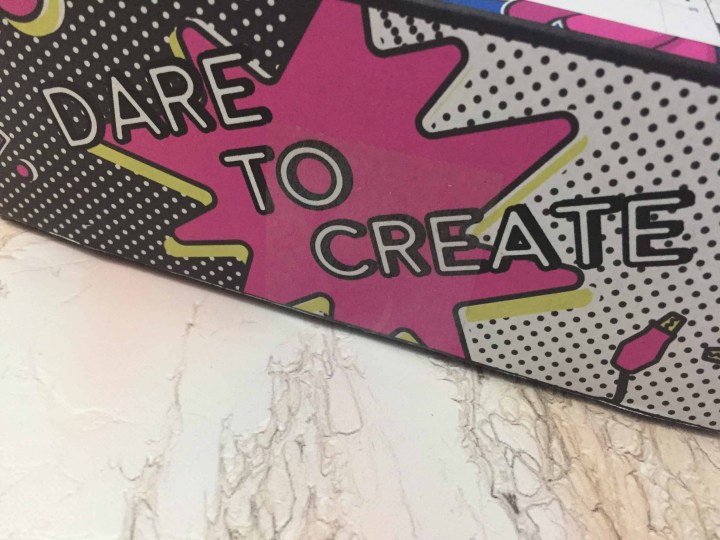 I’m excited to review Girls That Make, a Canadian subscription for girls who want to learn about electricity, technology, and coding! Using these skills, they’ll be able to create neat wearables and learn all about STEM and its principles! I might be a bit over the age limit for this box’s intended demographic, but I grew up in a time where STEM really wasn’t something girls were encouraged to explore, so this is pretty neat. 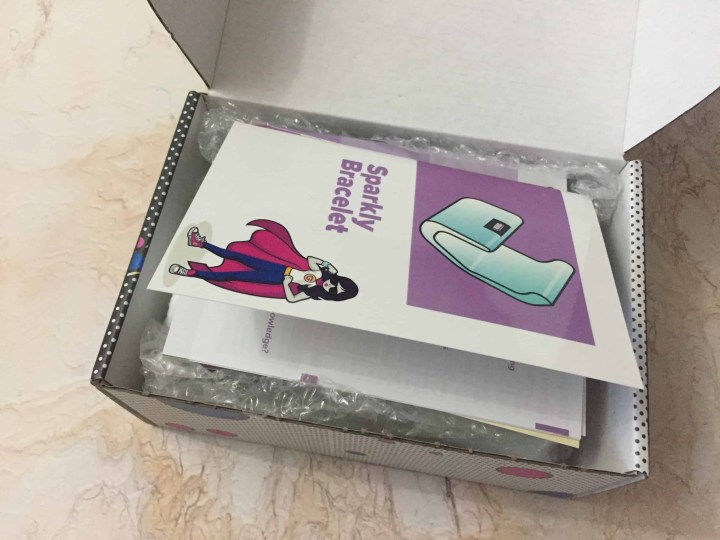 First look! The box is stuffed full of booklets and bubble wrap! 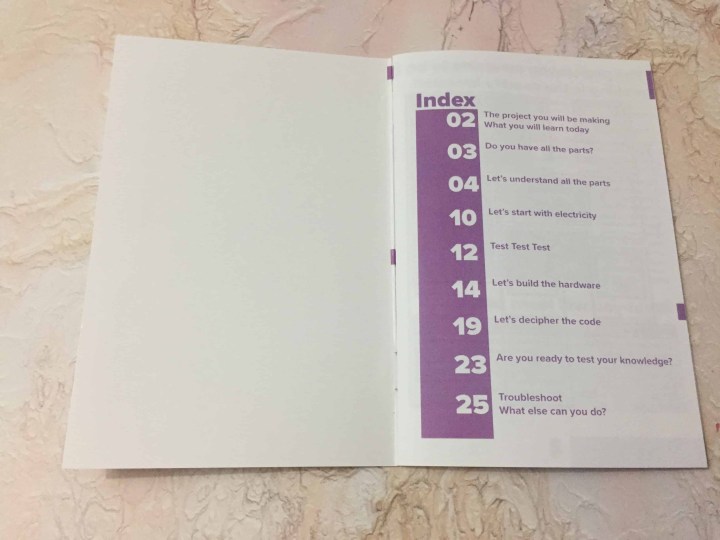 The booklet has a table of contents, and is quite lengthy at 25 pages. 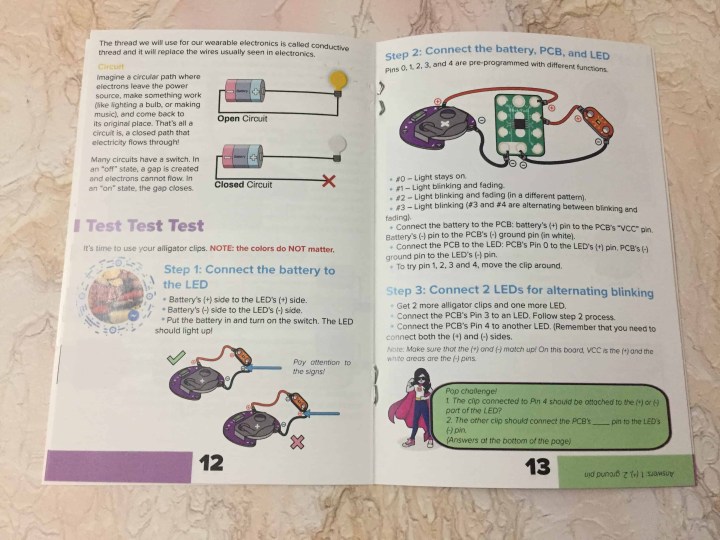 The booklet includes colour illustrations of everything as well as some Facebook Messenger codes to scan. When I scanned the code on this page, it opened up aconversation with the Girls That Make page, but it just said “Loading…” endlessly. I’m not sure if there’s meant to be instructional videos or additional content when this code is used, and the booklet isn’t really clear about it. 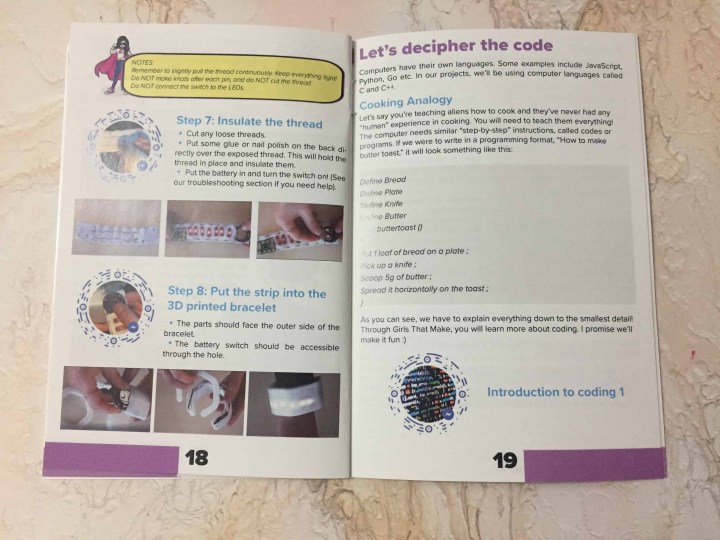 The first chunk of the book goes over the wearable itself, and the second launches into an introduction to coding. What’s not made clear is that this coding example has no effect on the bracelet we’ve just made — while the circuit board in the bracelet has a microcontroller in it, it doesn’t actually get used with the code that is explained. (Or, at least, I couldn’t find any mention of where we’re supposed to insert the code.) Possibly this is for a future project, but I found it a bit confusing that it was included without practical context to use it. 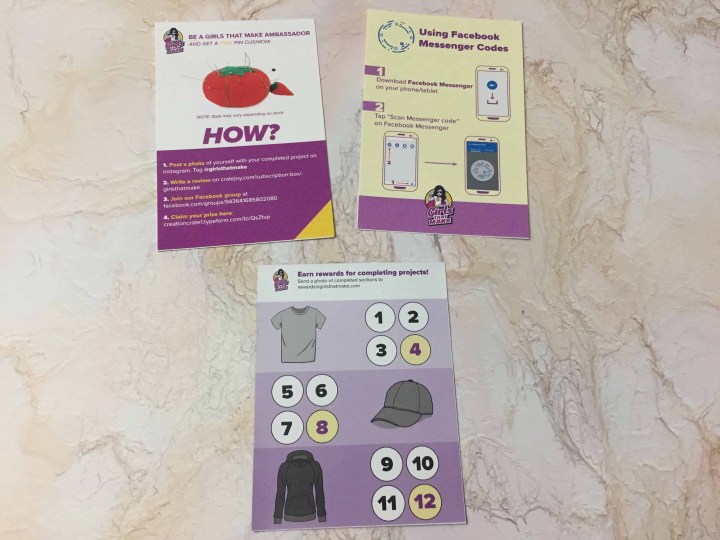 Some additional pieces of paper were included. There’s a social media contest, the Facebook Messenger codes, and a magnet that says you can send in pictures of the completed steps for rewards. 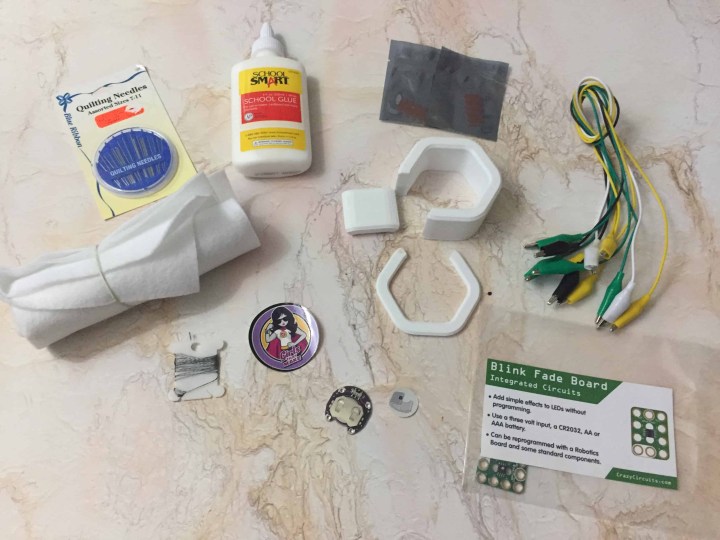 All of the materials included. It’s a mixture of arts and crafts materials like felt, needles, and glue, as well as the more specialty pieces like LEDs, batteries, and conductive thread. I noticed a few pieces in my kit were already assembled when I compared the contents to the checklist in the booklet: the magnets were already inserted into the 3D-printed bracelet, and the coin battery was already inserted into its holder (and it was inserted the wrong way/upside down). 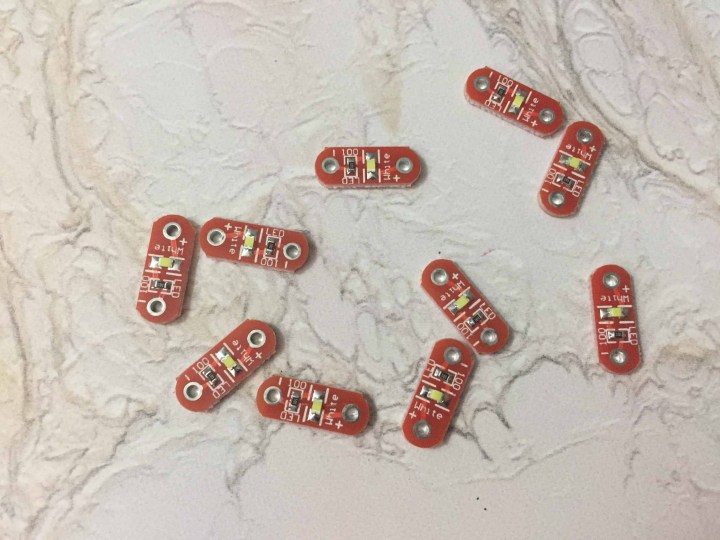 Here are the LEDs! Seven are needed for the bracelet, so we have a few extras which is handy in case anything happened. They snap apart easily enough. 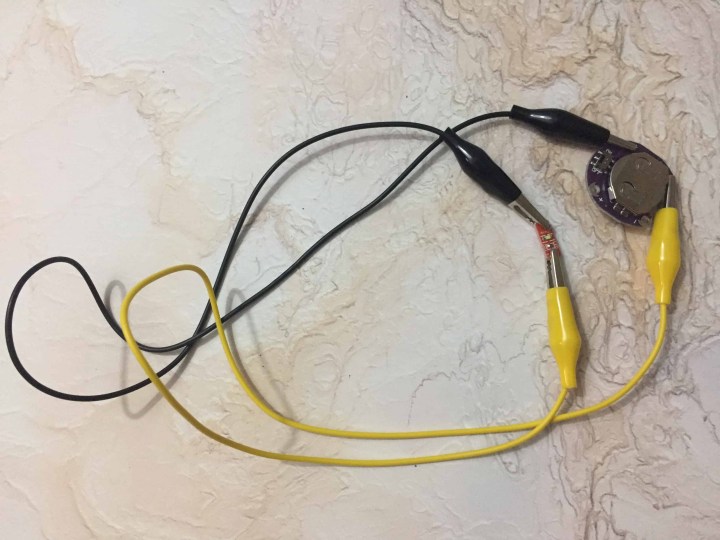 The first test is to use the alligator clips to connect the battery and switch to the LED. Once I figured out the battery was upside down, I was optimistic it would light up. But the alligator clips seemed to slide off of the contact points if you even so much as breathed on the setup, and as a result I could only get the LED to flash by physically manipulating and moving the clip around until I found the sweet spot. 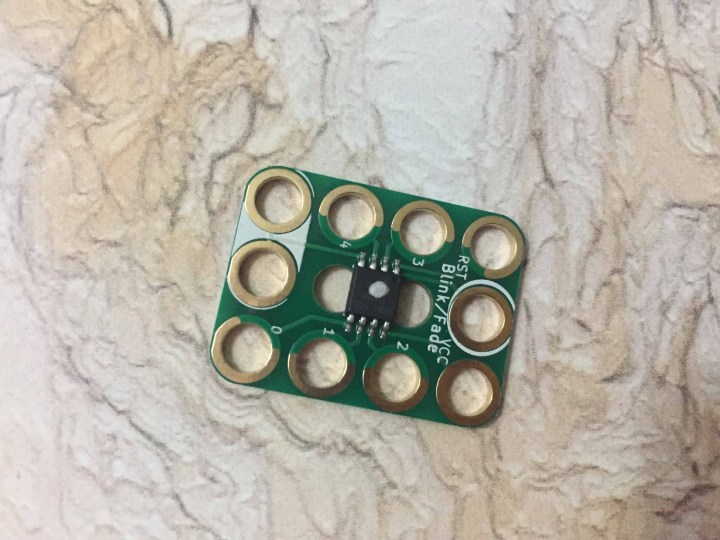 The printed circuit board, or PCB, is the brains of the bracelet. The microchip in the middle has a whole whopping 8 kilobytes of program space — which is actually enough to fit a fair bit of code! 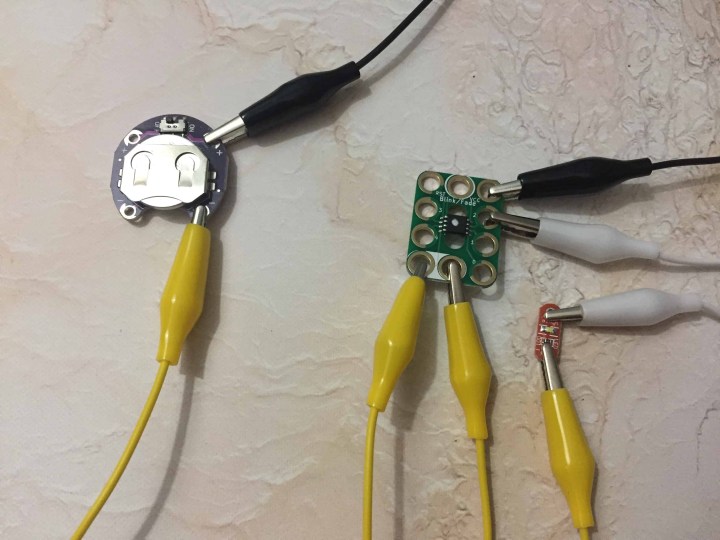 The next test was to connect the battery to the PCB and then the PCB to the LED to tell it how to flash (there are different options depending on which pin on the PCB you clip it to). I couldn’t get the LEDs to light up at all at this stage even after troubleshooting. Figuring that maybe I’d have more luck once I switched to using the conductive thread, I forged onward! 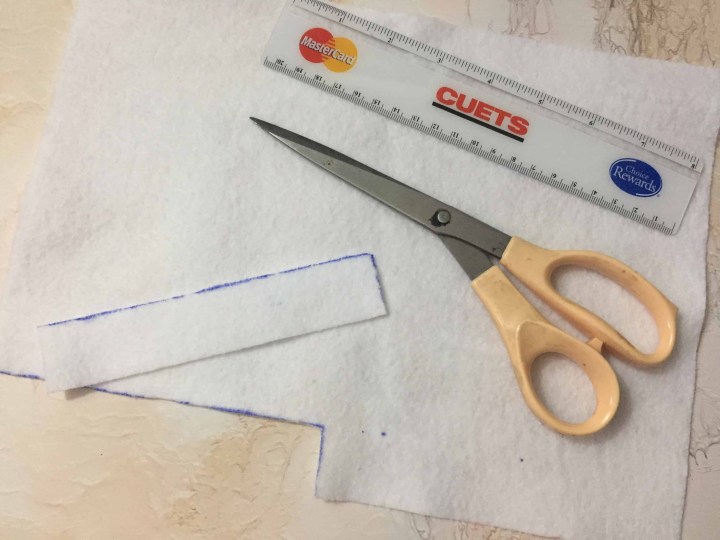 This was where the project started to fall apart for me. There were two main issues that were a result of the instruction book not being clear: 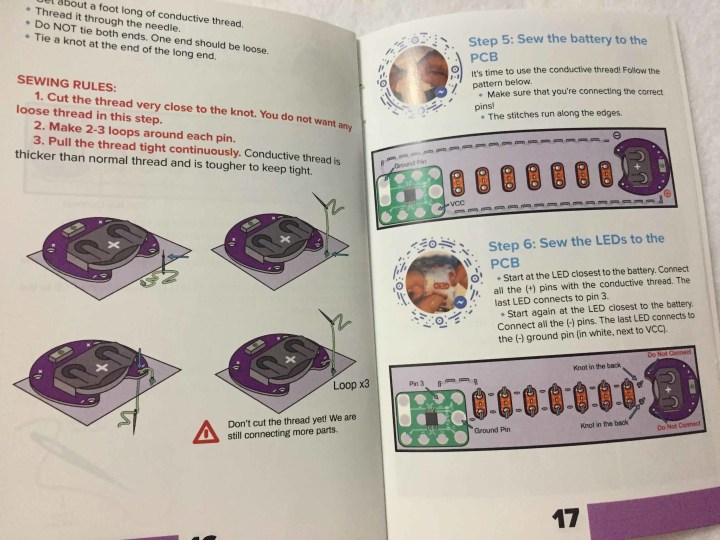 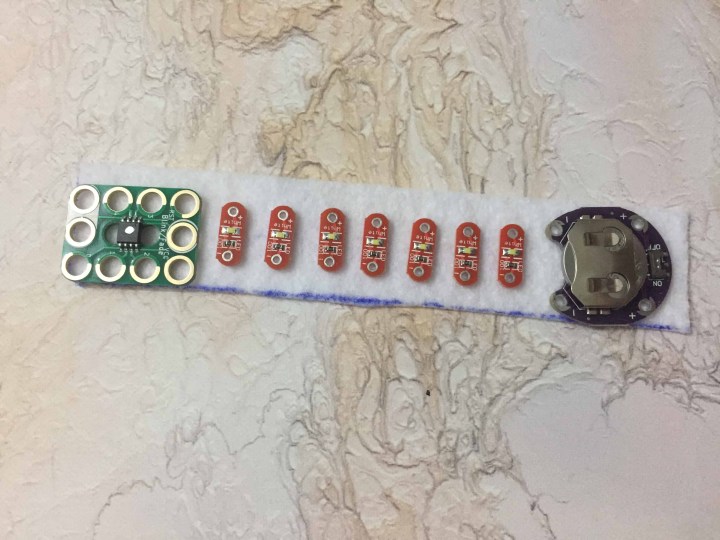 Additionally, you can see how the space quickly became an issue. There just isn’t enough room for everything using the given measurements. 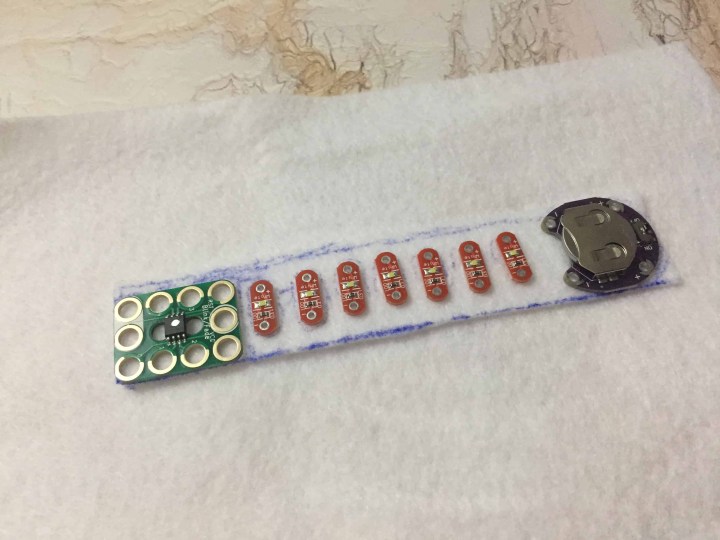 I glued the pieces in place and started to draw in the points where the conductive thread would go, but quickly realized it was going to be a tight fit. 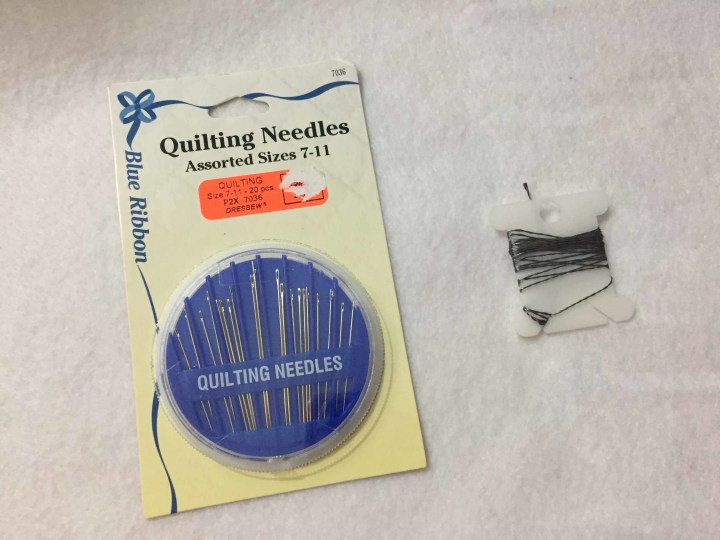 Needles and conductive thread were the next step. 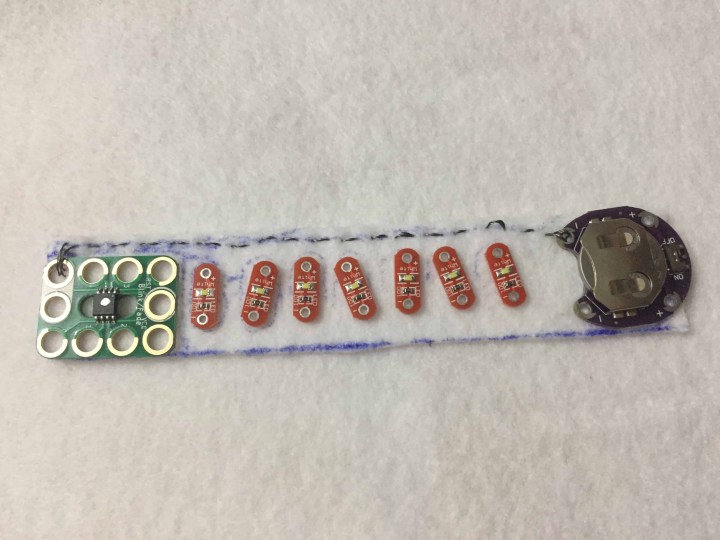 The top connection fit okay, but if you compare this to the above diagram you can see I wouldn’t have had any clearance for the stitches connecting the LEDs to the pin on the PCB, as well as the bottom pin on the battery and switch to the PCB. There just isn’t room, and after painstakingly hand stitching for 20 minutes, and limited thread, I wasn’t thrilled at the idea of pulling all of my stitches out and starting over on a fresh piece of felt cut to the size in inches, which would have yielded more room. 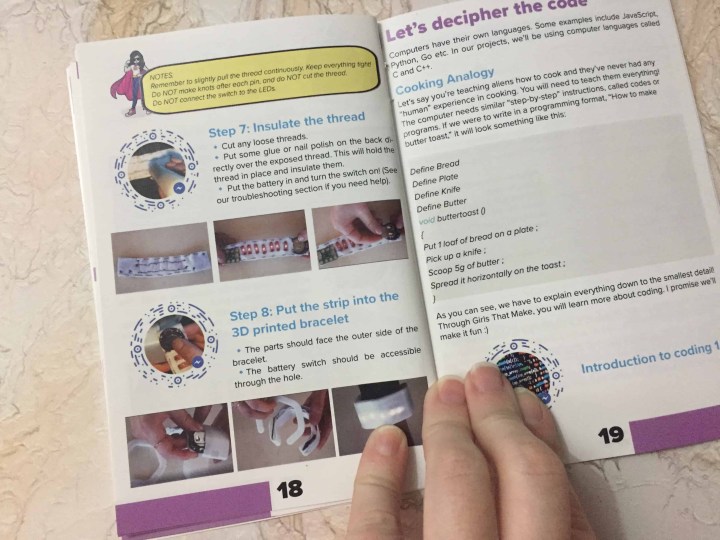 The final steps once you get everything connected with the threads is to put the strip into the 3D printed bracelet, and then work out your coding. I do love the cooking analogy they provided in the introduction to the coding.

Girls That Make is definitely the first of its kind here in Canada, and that is awesome. I had a lot of fun until I started running into problems, and I think that was mostly due to lack of clarity in the instructional booklet. It is frustrating when you trust what you’re being shown in the instructions, only to have it be misleading or incorrect. I’m unsure if the Facebook Messenger codes would have shown more information or a video, since they never worked for me. I think some streamlining in the instructions would definitely help, as the step by step was often interrupted by conflicting information. With a little polish I think this is going to be a really fun and unique STEM subscription for girls — even for old girls like me!

What do you think of this STEM subscription for girls?

Visit Girls That Make to subscribe or find out more! 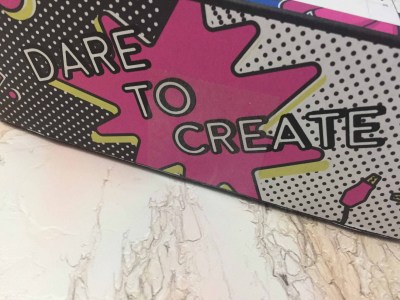 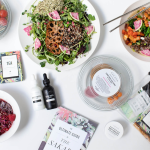 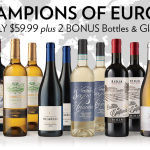 Yummy Crate Coupon: Get 50% Off Your First Month! 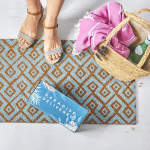