The Collectors Case is a geeky subscription box shipping from Canada. This box is unique because you have a chance to receive a mystery POP Vinyl or a celebrity autograph in your monthly box. If you want to guarantee that you’ll receive them you can upgrade to the “Sure Thing” case to make sure they are yours. Every month has a new geeky theme.

Come May, the Collector’s Case will feature Tim Rose!

Everything in my April box! Our box, which was received for review, was missing the shirt. After a couple emails they said they’d replace the shirt for regular subscribers.

After exacting revenge on the people responsible for the deaths of his wife and children, Frank Castle uncovers a conspiracy that runs deeper than New York’s criminal underworld. Now known as the Punisher, he must dig deep into the conspiracy to discover the truth about injustices that affect more than just him and his family. Assisting the vigilante in his quest to fight criminals are best friend Billy Russo, who runs private military corporation Anvil, and former NSA analyst Micro, who shares common enemies with Castle and helps him as part of a so-called marriage of convenience.

It can be used for hot or cold drinks, or even just for display! Great pen cup!

Aside from the red monster, you can also get Zuck Dodgers, Space Cadet, Marvin the Martian, and K-9 from this Funko series.

Gossamer is a hairy red monster, but on the TV show, it shows that it was more of an orange tone. He is the nerdy and shy son of Witch Lezah, and he also has a rectangular body and a face composed of only two oval-shaped eyes and a wide mouth.

Even the back of the figure captured his hairy appearance well!

His body is perched on two giant tennis shoes.

His claws make him a bit scary but looking at those big eyes is making him cute!

Funko Pop Mystery Minis Supernatural. Not everyone received this Supernatural item, and we’re lucky to be able to get one! Awesome!

The figure comes in a black blind pack.

We got Bobby Singer! Bobby is a veteran hunter, an old friend of John Winchester. Over time, he evolved into a father-figure for John’s sons Sam and Dean.

He is also one of the longest lasting recurring characters, apart from Sam and Dean.

His spirit was put to rest by Dean. However, there’s an alternate version of him still living in the Apocalyptic Earth who hunts angels and demons alike, thus, the shotgun.

This version wears his signature style, a cap, and his hunter attire.

USAopoly Supernatural Save Your Souls Card Game ($24.90) This game is a Hot Topic exclusive, so it’s cool to see it in the box.

Join the Hunt with your favorite characters from the TV series Supernatural. Each round you will team up with an iconic hunter, angel or the King of Hell himself. But beware! If you don’t choose wisely, you  may lose your soul…

It is similar to the card game “War” where you and a friend split a 52 card deck and then high card takes the trick until someone has all the cards. However, there are a few things added to spice things up, like trading cards with the player at your left.

The box contains 66 cards, 29 bonus cards, 52 soul counters, and rules! We’ll be playing this one!

For the first pack, we got San Francisco Giant’s Pablo Sandoval!

Sandoval is a Venezuelan professional baseball third baseman, who also played for the Boston Red Sox from 2015-2017.

The Vinyl figure also comes with an info sheet that lists all the MLB players you can get!

Topps Wacky Packages Sticker Cards. To wrap up the box, we got2 packs of fun stickers from Topps!

These spoofed brand stickers are funny and cool and a real 80s throwback (but better done than Garbage Pail Kids!).

We have the spoofed packages for Goldfish Crackers and the game Assassins Creed!

My Little Pony became My Little Brony, and Lego became Bego! Can’t help but crack up while going through these stickers!

There are some fake ads and coupons too!

The Collector’s Case is always filled with geeky stuff from the best and most popular franchises. This month, I am so happy to get an exclusive Supernatural item, although not everyone received that, and I also loved the Topps Wacky Packages stickers. The spoofed brands and products are just too hilarious! Everything else, I give a thumbs up! They’re all super fun, exclusive, high-quality and definitely for keeps! It’s a bummer we didn’t get the shirt because we would have LOVED it, but we’re hoping that was limited to our review box, and not subscriber boxes. 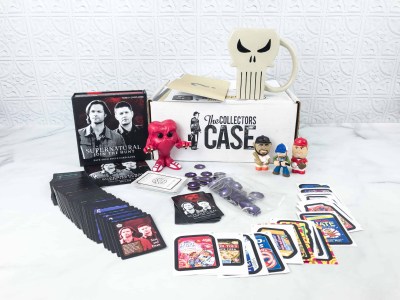 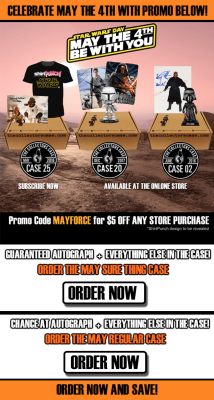 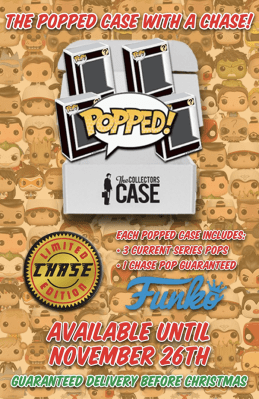