Pop! Game Of Thrones Daenerys Targaryen Vinyl Figure ($9.99) Our first Pop! from this box came from the medieval fantasy epic TV show, The Game of Thrones. It’s none other than the mother of dragons, Daenerys Targaryen!

Aside from the Unburnt, you can also get these other characters from the series: Jon Snow, Tyrion Lannister, Cersei Lannister, Bran Stark, Tormund Giantsbane, The Mountain (Armoured), and Wun Wun.

Daenerys here is sporting her look from the episode Beyond the Wall, where she is wearing her luxurious white and grey coat, and boots.

Her hair is also tied back in long braids.

I love how the back of her coat looked like dragon scales.

The hair is nicely detailed! I’m so impressed! This was on my thumbs up list!

Pop! Starwars Chewbacca With At-St #256 Vinyl Bobble-Head ($22) OMG OMG OMG It’s amazing! Wookies will be very much delighted with this Pop!, a Chewbacca figure mounting on an AT-ST!

The back of the box features an illustration of the figure.

This is a tall POP! figure, considering the length of the AT-ST’s legs.

The All Terrain Scout Transport, simply known as AT-ST, is a lightweight, bipedal walker used by the ground forces of the Galactic Empire.

Funko never disappoints when it comes to details! Chewbacca is really cute, while the vehicle was impressively made to look like the real thing.

The AT-ST is also called a chicken walker, and just by looking at it, you’ll understand why!

It is a combat walker that is used as a patrol and reconnaissance vehicle.

The AT-ST can actually have 2 pilots (a driver and a gunner) and can still have a passenger, but look at the furry Chewbacca taking up all the space bobbling his head everywhere!

The base came with the Star Wars logo, and instead of a clear base, it looks like the ground where the AT-ST used to run, with all the greens and the soil!

Pop! Rides Disney Hercules & Pegasus #43 Vinyl Figure ($27) Lastly, we got a POP! Rides figure that features the son of Zeus along with his divine stallion, Pegasus!

The back of the box also shows the other figures you can get from this line: Hercules alone, Meg, Phil, Hades, baby Hercules, and baby Pegasus!

The son of Zeus and Hera is looking all heroic in this figure, mounting on his “magnificent horse with a brain of a bird”, Pegasus.

Funko’s paint works may have flaws, but this figure is perfectly done.

Hercules embarks on a journey, not only to prove himself worthy of a place in Mt. Olympus but also, to know the true meaning of heroism.

The figure gave justice to the slender Pegasus’ blue mane and tail, and his giant wings!

It’s really great to get mounted POP!s. Overall, they look great and I am so excited to add them to my POP! collection shelf!

This month’s choices are fantastic as we got a fabulous Daenerys, and two mounted POP!s which are all about action and adventure. The details are always impressive, as they really captured the characteristics of the featured characters. My favorite this month is Chewbacca and the AT-ST, as the armament of the vehicle is fantastically shown in the figure. Pop In A Box is such a perfect subscription for Funko collectors. They have a system that makes sure that you won’t get a duplicate, just don’t forget to update your tracker! They have all sorts of Pops and all the new releases. We’re always looking forward to this box’s arrival at our door! 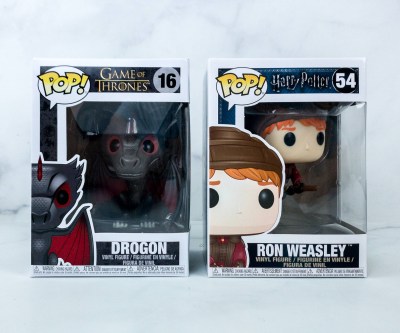