Snack Crate is a monthly subscription that provides the most interesting snacks and features new and exciting places from around the globe. They offer three sizes of box: the $14 mini with 5 snacks, the $26 original box with 10-12 snacks, and the $49 premium box with 18-20 snacks.

We switched our box from the crazy gigantic premium box to the original box. I admit, I’m having some FOMO about it!

When you sign up, your first box will be from a country of your choice.  You have the option of adding a drink for $6, which I think is a pretty pricey option, and I passed.

Each month, there are also stickers that represent the featured country.

For March 2018, we got snacks from Colombia!

The information leaflet features fun facts from the country.

It lists all the snack items inside the box, which are grouped into different box levels: Mini, Original, and Premium.

Aside from Premium, you’ll also see some drink upgrades printed on the leaflet.

The box is full of treats!

They even included a postcard featuring a beautiful scenery in Colombia, and the word “bacano” which is a Colombian slang term used to describe cool or awesome ideas, objects, and situations.

Everything in this month’s box! There are lots of ’em!

Bon Bon Bum ($0.36) These bubble gum pops, more commonly known as Bon Bon Bums, come in different fruit flavors: strawberry, orange, and wild apple. We received four of them! They look like regular lollipops on the outside but the center is actually a gum. These were a hit with the kids.

Platanitos – SIMILAR ($4) Plantain chips are popular in Colombia, and they call it platanitos. This makes a nice alternative if you want a break from your usual potato chips.

Each piece had a satisfying crunch.

Tocineta Bacon Chips. Bacon as chips? Well, Tocineta got it down pat.

The puffy chips don’t just look like bacon strips, they taste similar to the real thing too. It was smoky… I’m not sure this snack needs to exist.

Jet Chocolate Milk Bar ($1.25) This one’s for the milk chocolate fans! We received two bars and they’re quite small, but to me they’re still satisfying because of the rich chocolate taste.

The chocolate bars were sectioned into four squares, each with a Jet logo. You can break the bar into bite-sized pieces for sharing!

Every Jet bar also includes a collectible picture card. This one, for example, features Cangrejo Boxeador, a sea creature characterized by its spindly, spider like appearance.

The other side of the card includes more information about the photo. However, everything is written in Spanish.

Another card we got features a fly on a leaf. In Spanish, a fly is known as mosca.

Same with the first card, the description is written in Spanish.

Chocoramo Pound Cake ($4.17) This pound cake is covered in chocolate.

The chocolate coating was rich, while the cake itself was relatively soft and moist.

We broke the cake in half and it wasn’t crumbly at all. Upon having a bite, I immediately understood why this snack is loved in Colombia!

Bianchi Chocolate Bar. The combination of nuts and caramel made this chocolate bar so tasty!

It was perfectly covered in thick chocolate.

Just look at all that gooey and nutty center. I think it’s the Colombian version of Snickers!

Mani Moto ($1.20) It’s a peanut snack with a shell made with flour. These are quite hard to munch on, but it was salty and satisfying.

It makes a great snack in-between meals. I think it will even go well with a glass of ice cold beer! These covered peanuts are amongst my favorite snacks of all time – but the Colombian version was the hardest shell I’ve ever had!

Snacky Caramelo. These are just like cheese puffs, except it’s sweet!

These corn puffs flavored with caramel were light and crispy.

Piazza Fresa & Vanilla. We received two packs of these wafer rolls. One is in strawberry and the other is in vanilla.

There was some difference in the texture of the rolls, but both tasted really good.

Each roll was crunchy! I wish there was more of the filling though.

Achiras Del Huila. Traditional Achiras Del Huila can be bought in Colombia from little stalls by the roadside. This one is commercially made. think I agree with Colombians that these are great snacks for a road trip!

The crackers are made from Achira flour. They also have a distinct cheesy and buttery taste.

It was so easy to consume the wafer bar because it was so delicious. There was no partition, but you can easily break it into several pieces if you want to share!

They do look like solid chocolate balls, but the center is crispy and airy. They make for a nice, quick snack, but not as tasty as they look.

It smells strongly of coffee. I’m not so fond of it, but if you do love coffee this might be a great pick-me-up!

Snack Crate didn’t disappoint! This month, they focused on classic Colombian snacks and the box is filled yet again with an interesting selection of food items. Colombians must really love chocolate and bread because this box is full of them! I liked everything, except for the coffee flavored soft candy but that’s just really my personal preference. Our family loves snacks and getting to discover new ones from around the world is always a happy experience for us. If you love trying out international snacks, you’ll be glad with the generous medley that this subscription offers!

Are you getting this month’s Snack Crate? 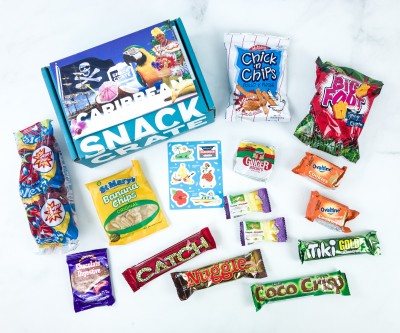