Geek Gear has a special Harry Potter themed edition of their monthly subscription box, now called World of Wizardry! When you sign up, let them know which house you’re in, and they’ll take care of the rest, delivering a box of magical items to you every month! The items are not authorized or official, but they are good quality and very creative.

A bigger and better product book, doesn’t give much information but has beautiful photos.

Stay in touch via social media!

All of these amazing Harry Potter themed items in one handy subscription box, I’m in love!

Exclusive House Pride T-Shirt. I love this Gryffindor courage shirt, I just wish the color was a little brighter. Gray is not a happy color in my opinion and HP brings me so much happiness that I feel this a bit boring and doesn’t resonate the true meaning of Harry Potter.

World of Wizardry Deck of Cards. Cards are something I never buy but look for on a regular basis, these one are going to be used and worn out. It’s hard to get mad at losing a card game when Harry and his friends keep showing up in my hand.

House Scarf. A beautiful lightweight scarf easily wearable in the summer. I love the bright colors and the house mascots with the words that embody each Hogwarts’s house.

Lightening Strike Necklace. The most notable signature of the Harry Potter series is his scar, having a necklace makes it so I can wear my HP love around my neck all the time. I do wish the lightening bold was a little thinner more like his scar than a fat letter z.

Flying Ford Anglia Figure. The famous car has been restored to the original condition and you can now proudly show it off on your shelf. An exclusive figure by GeekGear.

Exclusive Pin Series. Start collecting with the first ever No.0001 World of Wizardry Pin. Hagrid is the best friend and mentor the students at Hogwarts could have, I am overjoyed that he is the first pin sent.

Exclusive Licensed Goblet of Fire Print. I am so glad these are now coming wrapped and protected from bending, this is the best thing GeekGear has done so far. These prints get better by the month and I am so glad I can display them without so much as crease in them so everyone who enters my home gets to enjoy them as well.

Every month, I get just as excited about the arrival of my World of Wizardry box as I do about Christmas being one day closer. I used to love that each box came sealed so I could not get a sneak peek but in the last few months this hasn’t been the case. It seems like in a hurry to get the box out they can’t get them sealed before putting them in the mailing bag. I am loving that Geek Gear has been able to add licensed items! Between the licensed and exclusive items, I can’t get enough of Harry Potter.

What did you think of this month’s Harry Potter Geek Gear box, and what house would you be in at Hogwarts? 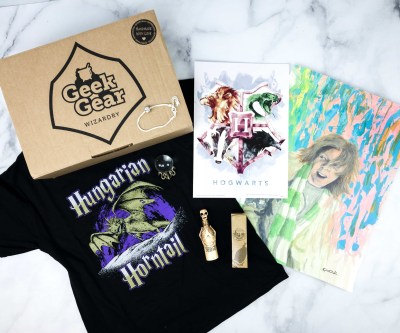 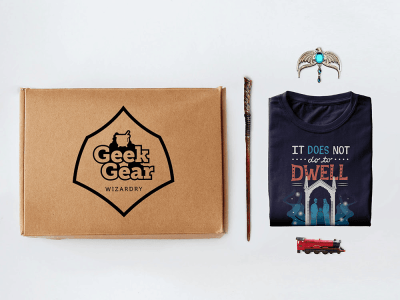