L’Epicerie Box delivers the best gourmet food from France directly to you door every month. Camille and Petronille, two French foodies, curate a monthly box filled with high-quality and local French goodies for only $55.95 per month.

Within the outer shipping box is a pretty box containing your treats.

The items are cushioned gently with paper squiggles and some bubble wrap. The box is capped with a cute print celebrating the imagery of a French city. Designed by Little Pétronille, this print shows the sun-soaked fun of Marseille. This box seems focused on the South of France, with items hailing from Provence and Basque regions of the country.

The back of the print has an authentic French recipe. This month we learned how to make aïoli, a haute cuisine staple that originated in Provence.

An information card lists of all the tasty French items inside. The information card is in French and English. Previous editions of the box saw the English track the sentiment of the original French closely, being a literal translation.

This month, however, each language’s blurbs appear to have been written independently of each other. The two versions focus on completely different facets of the products – bilingual folks can learn twice as much!

Everything in my May 2017 L’Epicerie Box!

Maison Taillefer Lemon Meringue Marshmallow: Bright and sweet, these citrus meringues have a light and fluffy texture. They are made in Agropole, which is located between Bordeaux and Toulouse.

The picture of lemon meringue pie on the canister had me expected a creamy and thick bite – the texture is actually very much like marshmallow, with a springy buoyancy.

Marius Bernard Cod Brandade: This whipped spread is an emulsion of salted cod and olive oil. It is traditionally served in winter with either bread or potatoes.

The main ingredient is cod, followed by sunflower and olive oils. In the classic Provencal style, milk is added.

A La Table De Mathilde Espelette Pepper and Pork Terrine: Pork terrine made in the Basque style. This product features Espelette pepper, a South American pepper cultivated in the region (specifically, the Commune of Espelette) since the 16th century and popular in Basque cuisine.

It has beautiful chunky texture, and you can see the red bits of Espelette pepper within the mixture.

Confiture Les Petites Parisiennes: Cherry preserves with slivered almonds. The cherries are whole (pitted), and they give the jam a deep color and lovely aroma.

Marlette Gingerbread: This organic mix creates a six serving loaf of spiced bread with candied orange peel. It is made with artisanal flour for unique and authentic texture.

Marlette’s founders are sisters from the Île de Ré, an island on the Bay of Biscay. This style of bread may seem like a dessert bread, but it is recommended as an ideal pairing for pâte and terrines.

I love this subscription!  Everything is high-end (you won’t get the latest mass produced canned drink or candy bar) – the kind of food you’d be proud to serve at an elegant tea or to dinner guests. The curation is absolutely tremendous, and it is obviously performed by individuals with an intimate understanding of French cuisine and its many regional variations. This box didn’t tout any particular focus, other than including a print featuring Marseille, yet all the dishes were in the style of either Basque or Provence, two Southern regions of France. Even the items that didn’t declare themselves to be representative of either region (e.g. the Guimauve and the spiced bread) were produced by companies situated there.

Visit L’Epicerie Box to subscribe or find out more! 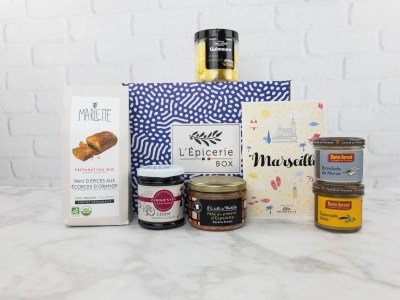