This month’s Shaker & Spoon featured some refreshing beverages to enjoy while catching the latest results from the Brazil Olympics.  Shaker & Spoon Cocktail Club is a monthly subscription box that is a great way to discover new drinks.  It gives you all the ingredients you need (except the booze itself) to make high-caliber mixed drinks. This is a really awesome idea for people that prefer to procure their own liquor, or live in a state where it cannot be shipped to them!

This month featured three great drinks using “cachaca!” Shaker & Spoon sends a handy email to let you know what spirit will be needed for the box, along with a value and mid-range option.  They ask high-end bartenders for advice on the brand of liquor to choose, so some suggestions may be craft or small batch, of limited availability in your area, or a little pricey for your taste.  I loved the thoroughness of Shaker & Spoon — it includes all the syrups, bitters, and citrus needed to make the drinks.  Some months even have peculiar stuff like herbs and jam.  This month’s box even featured a premier sample of a brand new syrup from Cocktail & Sons before it is generally available!  Aside from ice and the liquor itself, the box came with all the consumable ingredients.

The card gives an inventory of the contents of the box and some information on the nature of the drink, as well as the recipes provided.  A useful glossary card introduces the novice barman to the tools and terminology that will be used in the recipes.

A visual inventory of the box allows a quick assessment of the contents, though everything is labeled, too!  The glossary card is very helpful, describing the techniques and measurements peculiar to mixology.

Pictures of the drink when served in the recommended glassware.  The glassware called for in this month’s collection of recipes was typical, as we had one recipe using a rocks glass, one suited for a highball, and one coupe-served recipe, but it changes each month depending on the booze and recipes concocted.  We use a rocks glass for most drinks, and we usually use either the pony glasses (quarter-pint glasses) we received in our Craft Beer Club subscription in place of a coupe, or we go with a pint glass, Teku glass, or wine glass — whatever seems to work with the volume and style of drink.

Three cachaca drink recipes, each described in detail with recipe and instructions.  This set of recipes differs from what you’ll see in most Shaker&Spoon boxes — typically, they’ll have a featured liquor-based formulation of an Old Fashioned, an original cocktail that speaks to the theme of the box, and a very drinkable remake of a classic, like a Collins, Martini, Boxcar, etc.  This month, however, appeared to have three originals designed to showcase the unique qualities of cachaca.

Everything in my box!   I love that the box usually has both staples you can use in tons of drinks (like Angostura bitters) and interesting flavors to experiment with, like the unique syrups in this box.

The kit usually includes a mixer and fresh citrus — this one had Meyer lemons, and lime!

The Bitter Truth Cucumber Bitters:  The refreshing essence of cucumber with a pleasant bitterness.

Angostura Bitters:  The classic, with its sarsparilla-like twang.

Cinnamon Sticks:  The garnish for this set of drinks was elegantly simple.  The cinnamon sticks looked cool and helped recreate the warm spices of barbecued pinapple for the Abacachaca cocktail.

Spiced Pineapple Syrup:  This syrup lends the sweet flavor or roast pineapple to any drink, combing real pineapple, brown sugar, and cinnamon.  The brown sugar alone gives it a much richer and caramelized flavor than your typical syrup.

Cocktail & Sons Switchel Syrup:  This is a brand new flavor from Cocktail & Sons, and we are amongst the first to get to try it!  This syrup is the base for Haymaker’s Punch, and it is intended for use in Bucks and creative incorporation in a variety of highballs.  It combines ginger, citrus, wild honey, and a dose of apple cider vinegar.

Lemongrass Syrup:  This otherwise simple syrup blends in the bright and aromatic flavor of real lemongrass.

Cachaca Ypioca Ouro (not included):  Picking out our cachaca was easy — our local liquor store only stocked one brand on the shelf, though several were available for special order.  Cachaca is Brazil’s most popular spirit, so stores in areas with many people from Brazil you are likely to have more numerous options.  I found this brand to be as much like a tequila as a rum, so much so that I’ve been using it to make margaritas (at $27/liter, it’s a bargain compared to actual tequila)!  It tastes like a rum, but the flavors picked up from barrel aging are more akin to those you’d find in whisky than a rum.  The nose is all tequila, with a slightly herbaceous quality and the distinct fragrance of, well, tequila.

It appears that former Surgeon General C. Everett Koop may have an endorsement deal with this brand of cachaca.

Abacachaca:  This original drink is intended to recreate the flavors of churrasco de abacaxi, or barbecued pineapple.  It tastes just like it, too.  The pineapple and cinnamon is certainly present, but the amazing part is how the unique flavors of cachaca combine with the angostura bitters to lend a caramelized and cooked flavor to the sweet pineapple syrup.  Very tasty, this drink feels like a Christmas party drink because of the cinnamon and brown sugar.

Hemingway in Rio:  This cocktail is based loosely on the immortal daiquiri, but the addition of lemongrass and bitters transforms it into a unique space of its own.  The bitters and lime balance the lemongrass syrup perfectly, creating an experience similar to a daiquiri, but without the tendency to be too sweet.  Though not carbonated, the crisp flavors align to create a similar experience in your mouth.

Tijuca Tonic:  Named for a portion of rainforest abutting Rio, the Tijuca has a bit of everything.  The citrus and cucumber make it bright and refreshing, while the Cocktail & Sons adds a profound layer of spice, sweetness, and tang.  We enjoyed this immensely — it and the Hemingway were our faves.

Kicking back and slurping down some Shaker & Spoon cocktails while watching the opening ceremony — this is the way to make that special effects budget go further!

I love the “just add liquor” concept of the subscription — especially since the recipes are versatile enough to work with any decent brand — they provide a mid-range option, so you don’t have break the bank (and who wants to mix drinks with premium “sipping” liquor, anyway?).  As long as you have some basic bar equipment and a liquor store, you’re set.  Shaker & Spoon Cocktail Club fills a void in the drink prep world, and they do a great job!  I also love using the extra syrup, bitters, and garnish to make my own creations!  I really look forward to this subscription every month.

What do you think of Shaker & Spoon? Save 15% off 1 & 3 month subscriptions! Use coupon code  HELLO15. Cannot be combined with any other deal, only for first time subscribers.

15% off 1 & 3 month subscriptions! Use coupon code HELLO15. Cannot be combined with any other deal, only for first time subscribers. 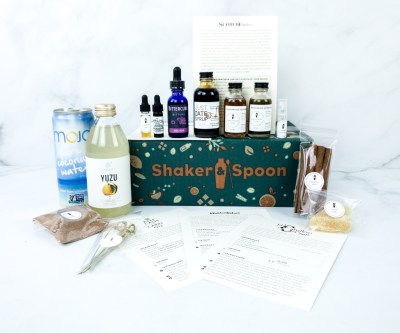 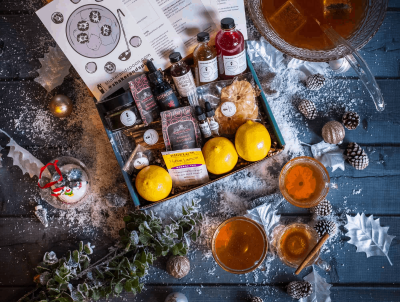