Hamptons Lane is a luxury monthly subscription box catering to cooking enthusiasts. Each month Hamptons Lane sends out themed recipes along with 4-7 curated artisanal ingredients and a kitchen tool that you can use to make delicious food at home.

Once you sign up, each month you’ll receive an email describing that month’s new box. You can choose to skip that month without any penalty (no later than the fifth of the month), substitute another box for the current offering or, if need be, you can cancel at any time.

It arrived! May’s theme was Southern Breakfast! As a Georgia girl at heart, I couldn’t wait to dig in!

These White Speckled Grits from Nora Mill Granary ($4.75) just outside of Helen, Georgia, are known colloquially as “Georgia’s Ice Cream.” Unlike many other grits, these are made from 100% pure whole grain, stone-ground white corn.

As an aside, I can’t tell you how many times I’ve driven past Nora Mill Granary without realizing it was there. 50, maybe? Leave it to Hamptons Lane to introduce me to a fabulous granary in one of my favorite areas!

Oh, apple butter, how I love you! And this Adams Apple Butter (roughly $9) is by far the best I have ever had! For those who haven’t experienced the joy called apple butter, it’s apples mixed with sugar and lots of spices–think a heavily-spiced and pureed homemade apple sauce. The first apple butter I ever had was at the Dillard House in Dillard, Georgia. I thought it was great. Until now. Adams Apple Butter is fabulous!

Sallie’s Greatest Blueberry Lavender Jam ($10) was good. It was very thick, and had an almost gelatinous texture. It didn’t look like the pictures in the Southern Breakfast recipe book, unfortunately. Still, the lavender was a nice touch to an otherwise basic blueberry jam.

Hamptons Lane’s Buttermilk Biscuit Mix ($8) is super easy to use. Just add one cup of water. It was produced by Bear Branch Milling Company in Ash, North Carolina. It made about 9 biscuits.

These three biscuit cutters from Fox Run ($3) come in different sizes so you can be sure to use every last morsel of mix! Hamptons Lane recommends cleaning and drying immediately after use.

This adorable piggy cast iron bacon press with a wooden handle by Norpro ($11.88) needs to be seasoned with vegetable oil before its first use, so give yourself an extra 25 minutes or so of prep time before making your bacon (or panini or anything else that requires even heating on two sides). Although I forgot to take a picture of it, I used this press to make both beef bacon and applewood smoked pork bacon. The beef bacon came out perfectly cooked, and my husband raved about the pork bacon!

This yogurt was delicious and super simple to make! Just add the blueberry lavender jam to plain yogurt, top with blueberries and garnish with basil. Yum! I enjoyed this more than store bought flavored yogurts as I was able to control how much sweetener to add.

These biscuits were also relatively easy to make! After adding water to the enclosed mix and kneading it in the way suggested, I was able to get 8 good-sized biscuits and one extra biscuit out of the mix. As I was kneading, I did have to add a bit of extra flour to the mix.

The biscuits turned out great! Hamptons Lane recommends baking them together for softer midsections and separating them for more crunchy sides. I baked mine together, and they turned out just like any great southern biscuit should.

I couldn’t decide how I wanted my biscuit, so I served it with homemade honey butter on the left and apple butter on the right. They were both so good! Mmmm!

For the next dish, I mixed in lots of Gruyere with the grits and served them with sauteed veggies. This was a wonderful dish. I did use more Gruyere than suggested, which everyone agreed was a good call.

For the shrimp and grits dish, I wish I had put more cheddar and chives in the grits. Still, the dish was good, and my kids were begging me for more shrimp.

This blueberry crumble was easy to prepare. The most difficult part was breaking down the thick jam so that it coated all of the blueberries.

Yummy! I loved the depth of flavor afforded by the lavender, and the almonds gave this a nice crunch. I look forward to playing around with this recipe and using different fruits to make more crisps in the future!

After a full day of delicious food thanks to Hamptons Lane, we still had four biscuits leftover. They were so good that I just couldn’t let them go to waste! So two days later, I treated my family to strawberry shortcake for dessert, made with the leftover biscuits! It was so delicious and so easy to make!

If making it with four biscuits, slice up two packages of fresh strawberries. Place half of the strawberries in a pot with a little bit of water and a little bit of sugar. Cook the strawberries in the pot down to desired consistency. Whip up some whipping cream (I added a bit of sugar). Cut the biscuits in half. Put a large scoop of ice cream in the middle (I used Haagen Daaz Vanilla). Surround ice cream biscuit sandwich with raw sliced strawberries. Spoon cooked strawberries on top (I brought down their temperature a bit in an ice bath first). Place a spoonful of whipped cream on top and garnish with mint leaves. Since I was using leftover biscuits, start to finish this took no more than 20 minutes, most of which was occupied with waiting for the temperature of the cooked berries to come down a bit. So easy!

The value of this box seems to be a little lower than usual, around $45.50 (slightly under the cost of the box, in fact!). The values on the Hamptons Lane website were all inflated this month, and I’m not sure why. I hope this doesn’t become a trend! Still, it was a fun box that brought me back to my roots.

I’m loving these Hamptons Lane boxes! They’re so fun that I’d like to buy some of the old boxes on my own to try out new skills and recipes.

Do you subscribe to Hamptons Lane? What did you think about this month? If you haven’t, get $10 off your first box with coupon code  hellosubscription10.

Visit Hamptons Lane to subscribe or find out more! 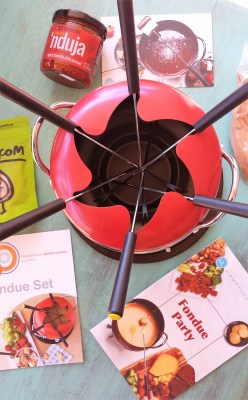 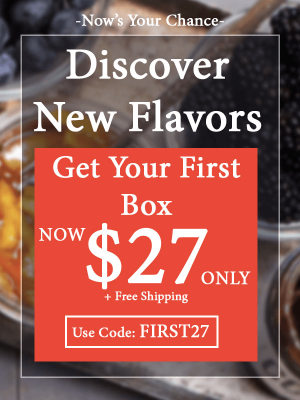 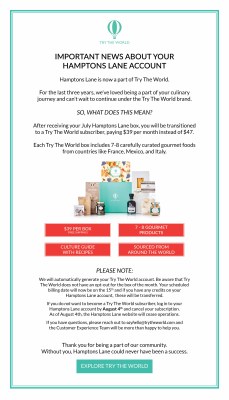