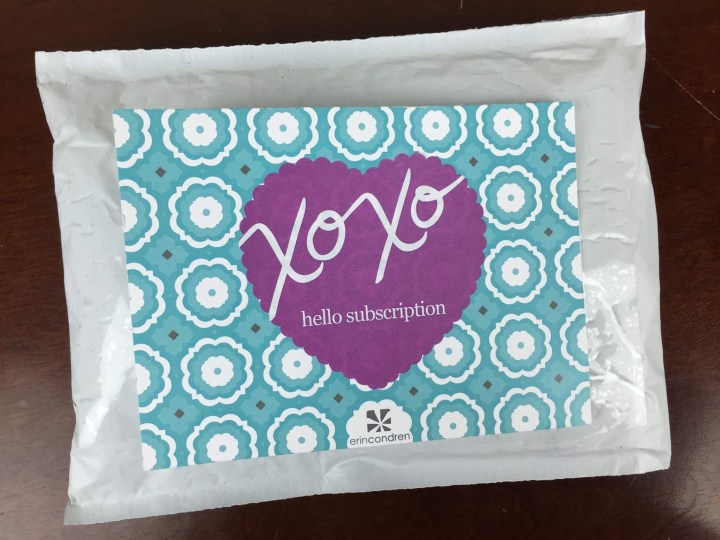 Buzz Bag by Sweet Melissa’s Gifts & Etc is a subscription filled with fandom jewelries and gifts. The cost for each mystery bag is only $15 per month (you must buy each month individually). 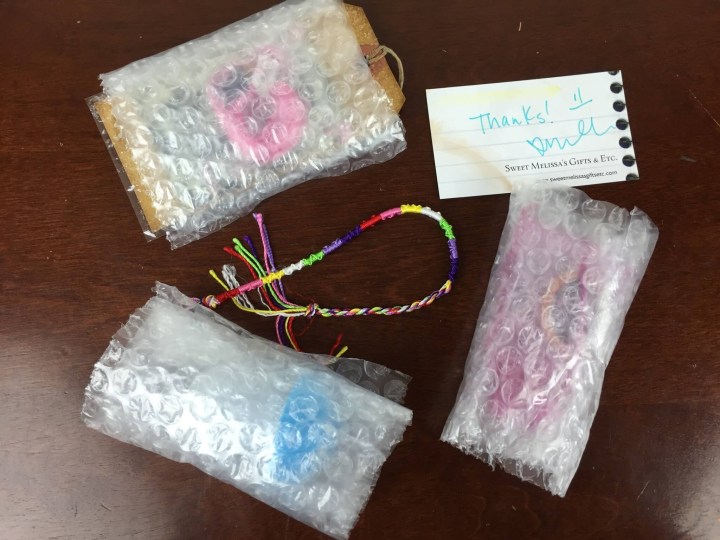 Everything comes well packaged and protected! 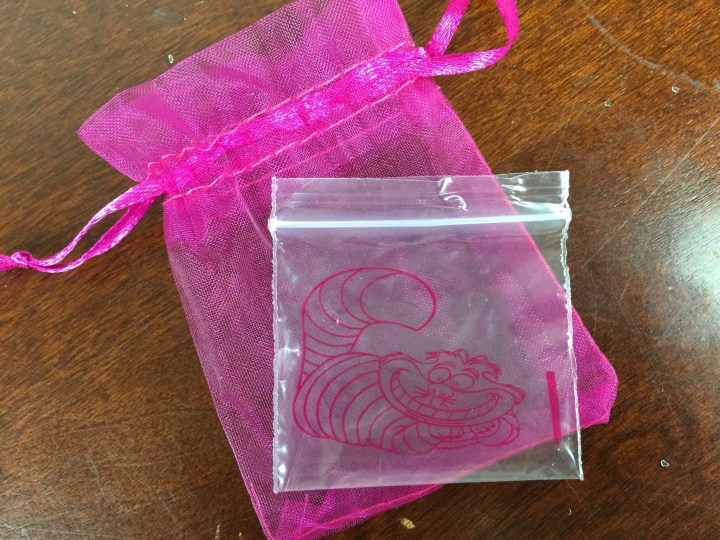 Each bag you’ll receive follows a certain theme every month, which is announced before you can buy. It is the perfect geek box for those who are fans of Game of Thrones, Harry Potter, Lord of the Rings, Star Wars, Legend of Zelda, The Hunger Games, Doctor Who, Percy Jackson and much more!
Cheshire Cat! 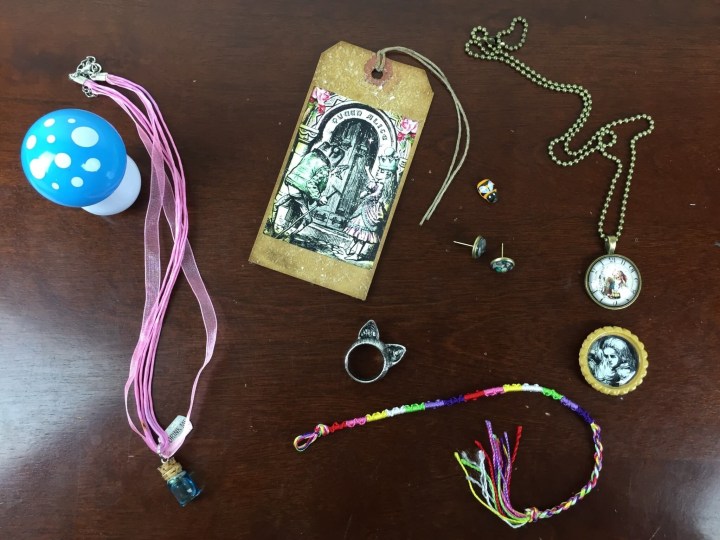 Everything in the May box! It’s a Alice in Wonderland-themed May bag! Note that for May there were 2 sizes, I bought the upgraded ($20) one – which included the bookmark and the drink me necklace as extras. 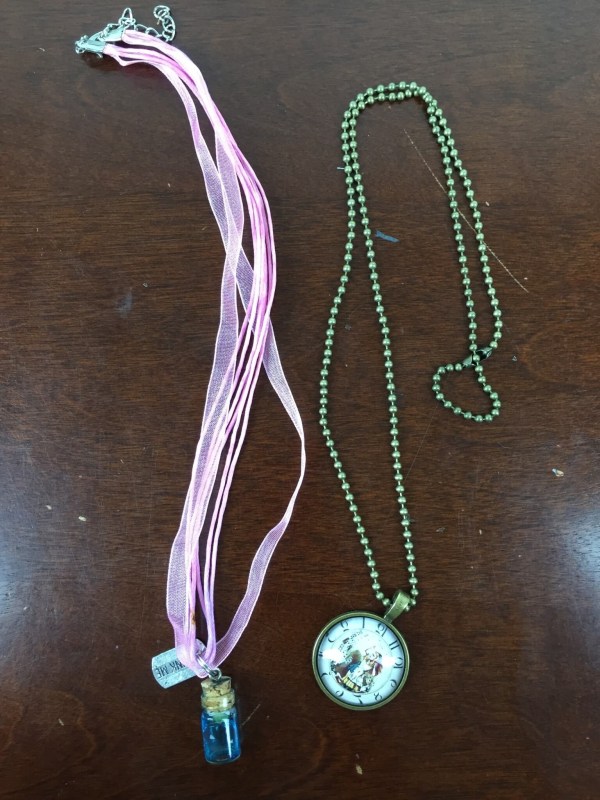 Drink Me Bottle Necklace: This necklace features a wee little bottle and cork stopper with a drink me metal plate on a pretty organza ribbon.
Alice in Wonderland Necklace: Alice fleeing from the card soldiers. This comes on a nice long antiqued brass look ball chain.
FYI – it’s very hard to take photos of the items with the rounded clear tops – they look great in person but sometimes they appear distorted in a photo. 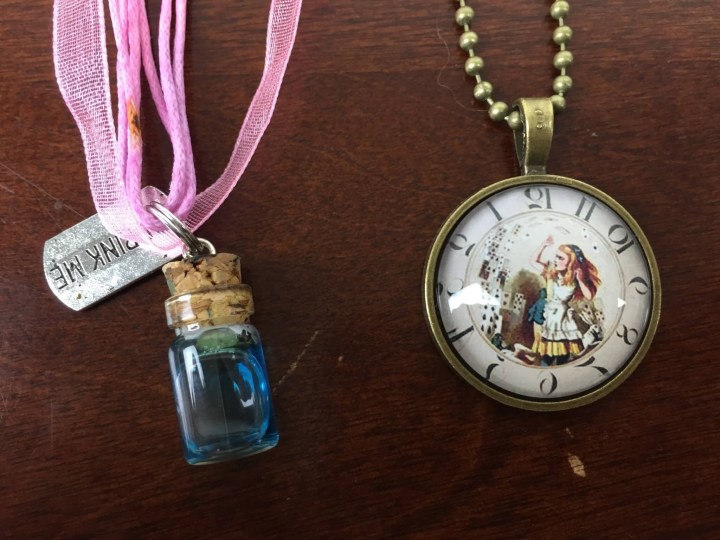 They’re so cute, I die. I’m sort of Alice in Wonderland fanatic! 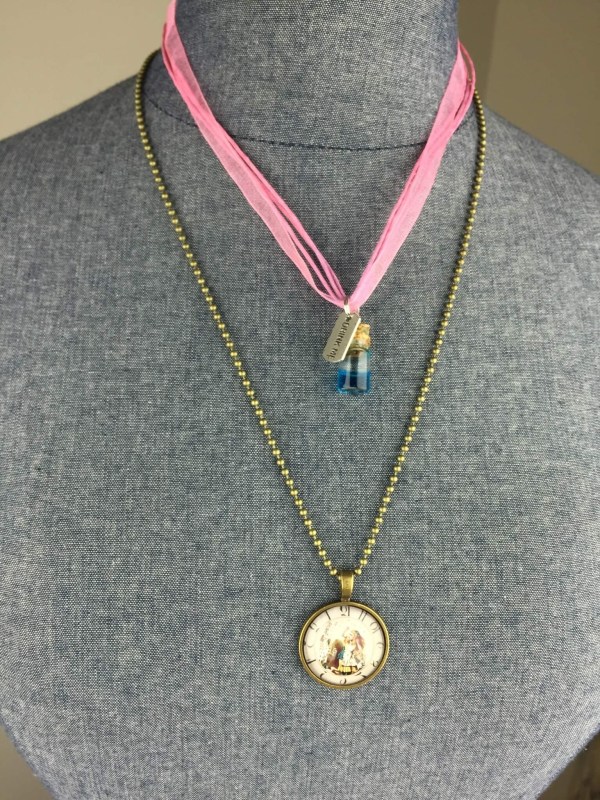 Here’s how the necklaces look when worn. I loved that the length of these mean you can layer them together! 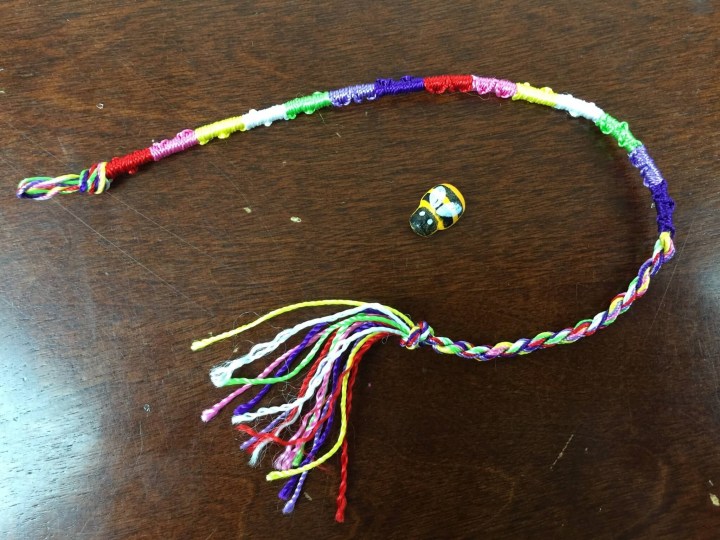 It seems like a knotted sort of bracelet comes in each month’s bag – this month was rainbow. Also included – a tiny bee (nod to the Buzz Bag!). 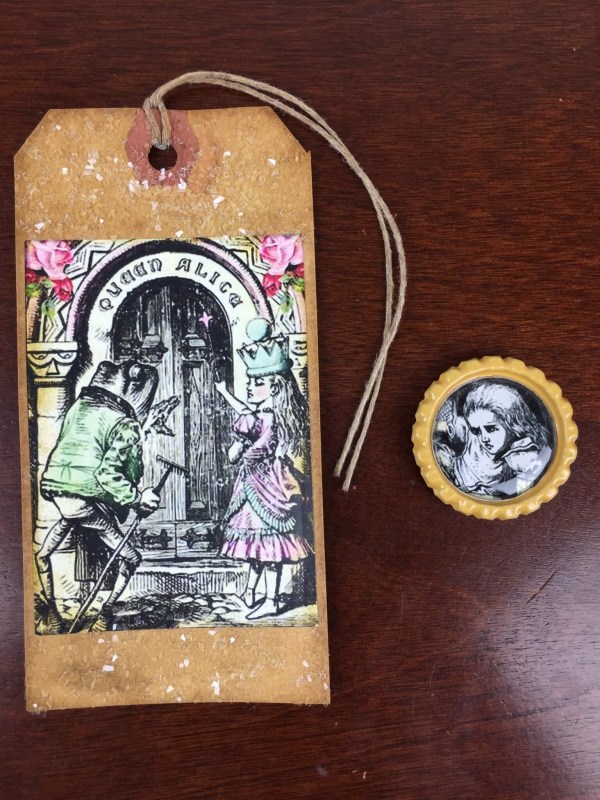 Alice and the Frog-Footman Bookmark: This is too cute – and will hold my place nicely in a re-read of Alice’s Adventures in Wonderland. I think it would be a great time to share it with my children.
‘She was standing before an arched doorway, over whih were the words “QUEEN ALICE” in large letters … Alice knocked and rang in vain for a long time; but at last a very old Frog … got up and hobbled slowly towards her: he was dressed in bright yellow, and had enormous boots on.’
Alice Magnet: I just love the Tenniel illustrations! This one is of Alice after she’s eaten the cake and stuck in Rabbit’s house. It’s a fun addition to the fridge – we don’t get nearly enough nice magnets like this one. 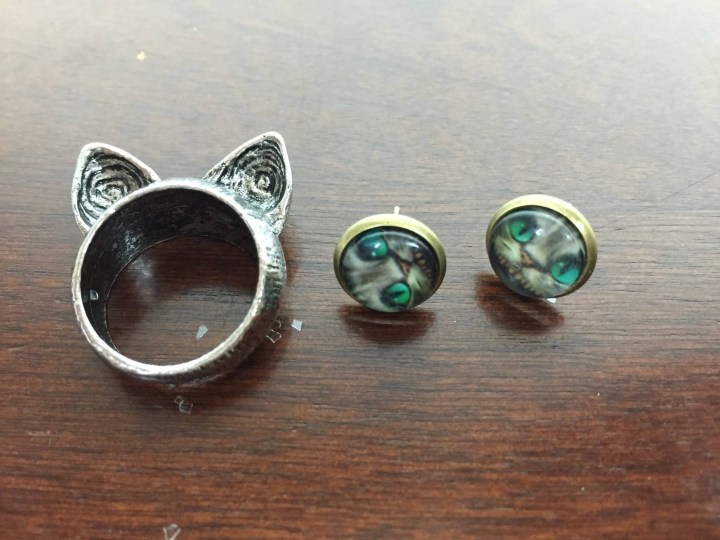 Cheshire Cat Ring & Stud Earrings: Ooh, these earrings are somewhat creepy and I love them.  The ring is especially cool. 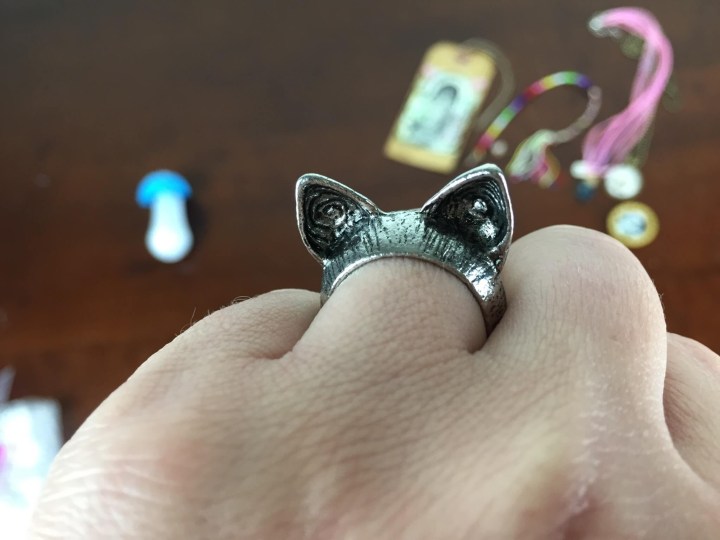 The rings last month were too small for my fingers. Although this ring is sized I had no problems finding a finger for it! It’s super cute! 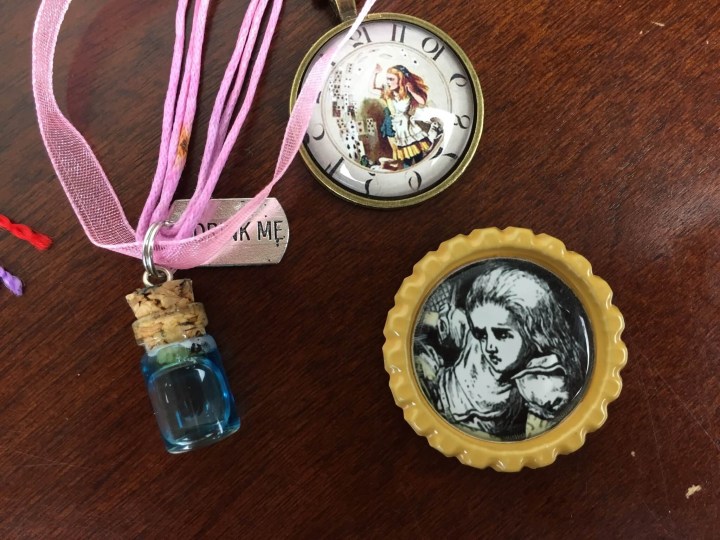 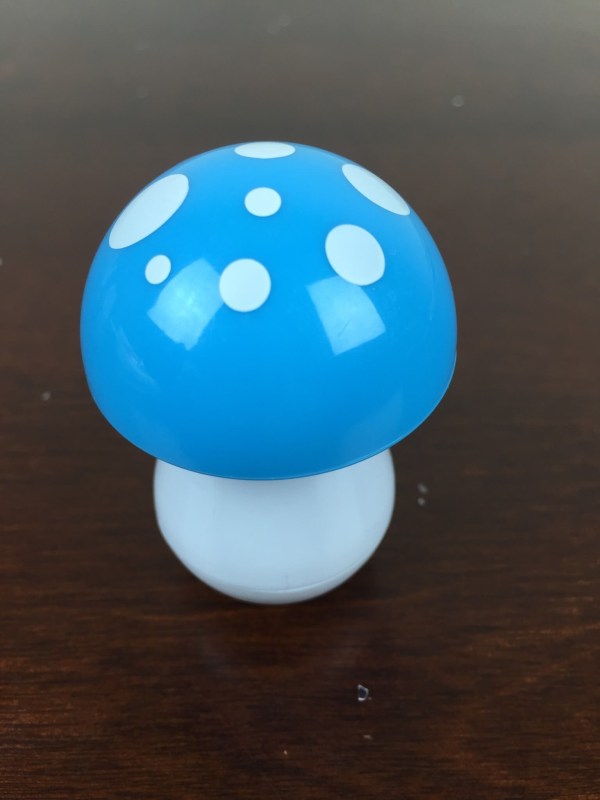 A fun little toadstool pen was also in the bag. To be honest, when I picked these up (I had also ordered the April bag) I had no idea it included extras. 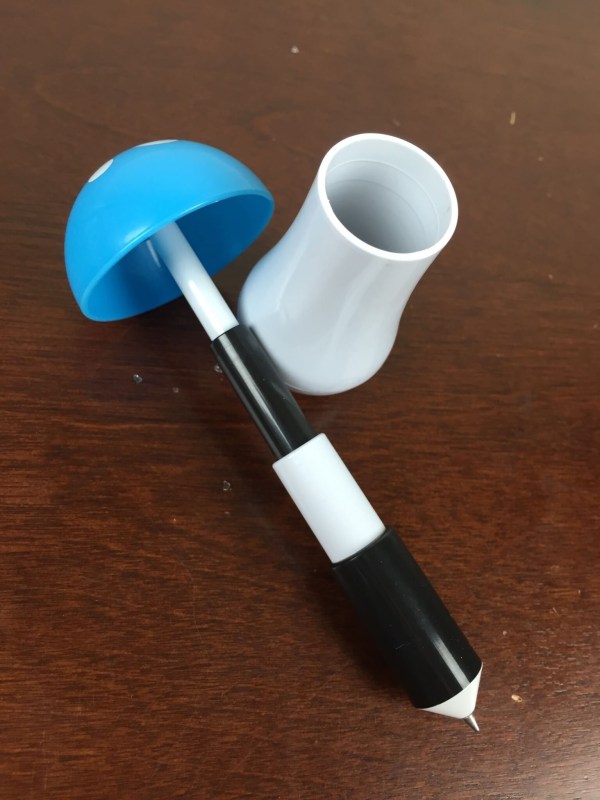 Tada! Cute decoration, and handy, too.

The upcoming themes are all released in advance, which is great. The June bag is WOW themed! I think this is a fun, inexpensive monthly surprise bag and you get more than you pay for. I’m probably not in for another one until November (ok ok, October) just because of my theme preferences, but I’m definitely keeping an eye on this subscription. My recommendation is to pick one up if you love the theme!

The Subscription: Buzz Bag – Sweet Melissa’s Gifts & ETC.
The Description: A mystery bag filled with fandom jewelry & gifts, just for you! Buzz Bags are filled with items from your favorite sources of entertainment, including Game of Thrones, Harry Potter, Lord of the Rings, Star Wars, Legend of Zelda, The Hunger Games, Doctor Who, Percy Jackson and much more! We focus on giving fans high-quality, fun items that celebrate fandom. Each bag is tied together with a theme and is announced prior to your purchase.
The Price: $15.00 per month
See Buzz Bag – Sweet Melissa’s Gifts & ETC. in the Hello Subscription Box Directory!
The Categories: Geek Gamer & Nerd Subscription Boxes. Geeky Fandom Jewelry Subscription Boxes. 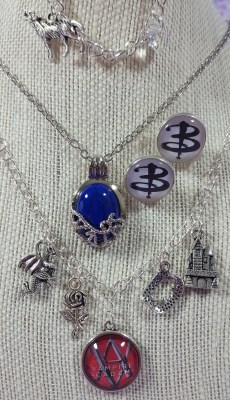