Bumby Box is a monthly eco-friendly toy and book subscription service for infants, toddlers and preschoolers that tailors their deliveries to each child’s interests and developmental needs! When you sign up, they send you an email asking you what your child’s favorite activities are. They also ask whether your child is approaching any significant milestones, such as potty training, moving into a new house or becoming a brother or sister. Based on your answers, they curate a box especially for your child.

Each box contains approximately 3-4 eco-friendly toys and books. Included toys are always free of phalates, PVC, BPA and other harmful plastics. Paints and inks are either water or soy-based. While all included manufacturers support their own communities, treat their workers well and provide them with fair wages, Bumby Box strives to do the same as well: it donates toys to nonprofits that help families and children in times of crisis. This is a box to feel great about! Bumby Box promises that the total value of the box will always exceed the amount paid for the box.

Each box of toys and books arrives well-packaged along with a letter that includes songs and other activity ideas to help encourage playtime with your child.

This month’s shipment included an organic dog stuffed animal, recycled plastic blocks, a wooden snail walking toy, a book for children about to embark upon potty training, an informational letter, a thank you note and some seeded paper.

The inclusion of this thank you note was lovely.

I can’t wait to go plant these seeded paper stars with my daughter!

The included letter lists the contents of the box along with ideas to help foster play with your child. Because I told Gena that we were going to start potty training soon, the letter included suggestions and a song for successful potty training. How cool! Since my daughter’s box also included blocks, Bumby Box’s curators also suggested using blocks to make comparisons such as taller/shorter and bigger/smaller. Great idea!

“Potty” by Leslie Patricelli ($4.85) is the best potty training book I have ever read. Told from the perspective of the baby, it’s happy, fun and exciting, all at the same time. It left both of my children in stitches. After reading it seven times in a row, I declared enough until bedtime…when I read it another four times in a row. This was a huge hit!

This Under the Nile Scrappy Puppy ($15), made from 100% Egyptian organic cotton scraps left over after clothes production, was also a huge hit. After playing with it around the house, both of my kids took turns taking it for a ride in the stroller.

When we left town to go on vacation, this was the one stuffed animal we brought with us. My daughter carried it around daily, proudly proclaiming “doggie!” to anyone who would listen. I love how the mouth on the dog is relatively flat–once my daughter begins to engage in more creative play, she’ll be able to imagine a broader range of emotions for the dog than she would were the dog’s mouth sewn in as a smile.

This Green Toys Block Set ($24.99) included 18 large blocks of different shapes and colors. Similar to Legos, but much, much larger, these blocks were made from recycled plastic. They’re the perfect size for small hands to grasp.

While relatively easy to take apart, they stay together really well. This made them the perfect block for my daughter! She loved building towers with these!

The Pull Along Snail by Plan Toys ($19.99) is my daughter’s new favorite pull-along toy. The colors are great, it stays erect relatively well and its movement is very fun! After taking it for a stroll around the house, she brought it outside.

She had so much fun playing with it!

Once my son realized that my daughter had moved on to the snail, he decided to join in on the fun: while my daughter walked the snail, he took the doggie for a ride in the stroller. The two of them ran up and down our driveway giggling continuously for a half an hour with the two new toys.

Once tired, they retreated inside, where they built a block tower together.

Although the individuals behind Bumby Box didn’t know I have two kids, everything in this box was so great that even my four year old loved playing with the toys and reading the book! I love that the items in this box brought my two kids together, while still being developmentally appropriate for my daughter. I cannot imagine a better curated toy and book box for my daughter than what Bumby Box sent us this month. And with a value that exceeds the cost of the box by almost $15, I thought this was a great deal. My daughter and I cannot wait to receive next month’s shipment!

Have you tried Bumby Box? Save 10% on your entire subscription with coupon code BUMBY10.

Visit Bumby Box to subscribe or find out more! 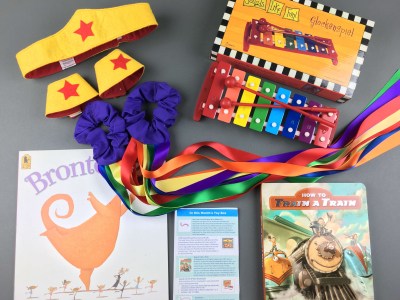