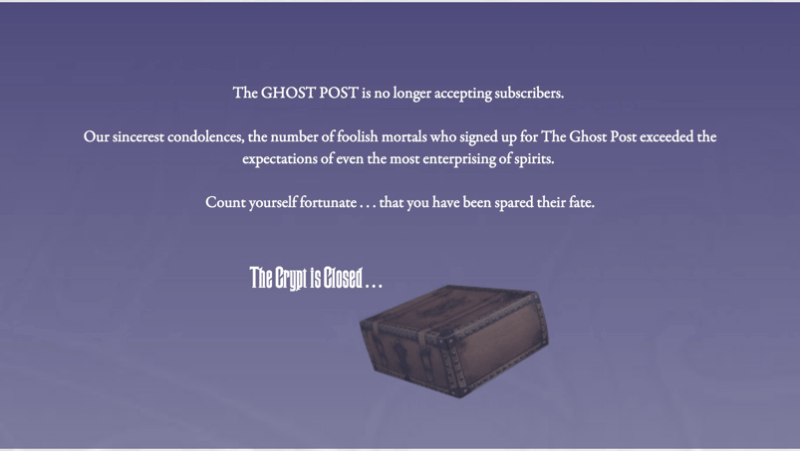 Wailing and gnashing of teeth… once there was a subscription box that nobody knew anything about. Its name was Ghost Post – a limited edition release of just 999 parcels in a 3-box run ($199) direct from the ghastly inhabitants of Disney’s Haunted Mansion. Subscribers were promised  a series of ghoulish objects from the cobwebbed depths of the Haunted Mansion. Even though I didn’t hear about this one until after the fact, I’ll be sharing the spoilers via Instagram below!

I don’t’ think Disney did any marketing for this subscription, which sold out in no more than 3 hours. 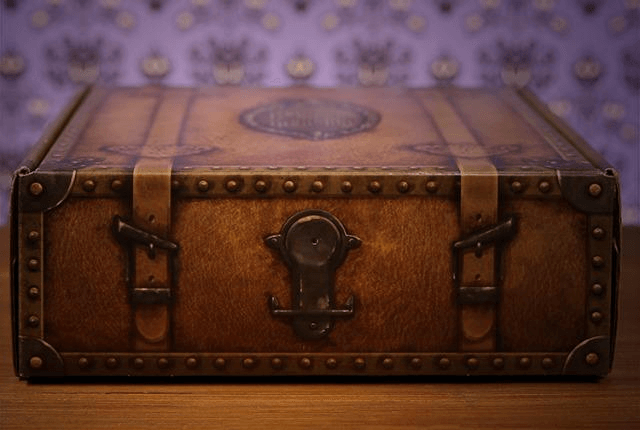 If you are brave or foolish enough to help the spirits, then subscribe to the Ghost Post. Beginning at the end of March 2016, the Ghost Relations Department will send you three “scare packages.” You will receive one box per month, for three months.

Each box is a chapter in an unfolding story that connects you directly to the ghosts of the Haunted Mansion. In the boxes, each item will have certain hidden qualities and secrets for you to discover, and each one will become a prop in your experience – revealing a little bit more of the story.

I hope the success of this box shows Disney exactly what subscribers want from Disney subscription boxes – an experience in a box, not just some trinkets!

The Ghost Post experience requires an iPhone.* The Ghost Relations department has developed a marvelous Phantom Radio iPhone App. The app makes your iPhone particularly sensitive to the haunted artifacts you will receive in your subscription. Using the app, you can unlock new aspects of your objects and connect with the ghosts of the Haunted Mansion.

The box included a build your own “radio” kit to use with the iPhone application.

Kevin surprised me with this “Ghost Post.” It’s a murder mystery box from the Haunted Mansion, and this is the first of 3 boxes we’ll receive. Only 999 people could sign up for it, so I’m feeling pretty lucky! #GhostPost

Another video of the radio!

The residents of the Haunted Mansion have become fascinated with the foolish mortals that tour their home. They believe these visitors might just be the solution to a problem that threatens their haunting ways.

We at the Ghost Relations Department have taken on the task of finding humans who can render this assistance.

Subscribers can visit the Dead Letter Office to interact with other foolish mortals (or really smart ones – it’s currently going on ebay for around $400 and a few boxes have sold near the $500 mark!)

A photo posted by Steph Lawless (@stephisheppi_mickeytravels) on Apr 8, 2016 at 8:42pm PDT

There were clues to decode.

A photo posted by OurDisneyEveryday (@ourdisneyeveryday) on Apr 7, 2016 at 5:56pm PDT

Including those on special paper that you apparently had to freeze!

Rap on a table, its time to respond. Send us a message from somewhere beyond … #ghostpost from the #hauntedmansion

Subscribers are able to extend the fun at Disneyland with an in-world experience!

Esmeralda sent me on a quest to find The Captain at Fowler’s Harbor. This was way too cool! When I got near the compass it lit up! A crowd formed around me and even the cast members were like “I’ve never seen this before” – I had to capture the needle and point it true north and as I say in the video “I rescued him”…. LOLOLOL I hate my voice. HATE IT. #ghostpost

A closer look at the compass.

This Ghost Post is probably one of the best ideas the imagineers have ever had. When I got near Esmeralda, the Phantom Radio picked up her sympthetic vibrations and she immediately started to give me a special fortune leading to The Captain at Fowler’s Harbor (video coming soon). Bummed the Haunted Mansion closed as soon as I got to it but I still was able to experience a few of the Ghost Post tricks and treats. #ghostpost

A visit to Esmerelda in person.

Once you unlock the experience you get whisked to the front of the line of Haunted Mansion and get placed in a special Doom Buggy.

Congrats to all the Happy Haunts that scored this box! Next time I hope someone sends me some sympathetic vibrations to let me know about it! If you got the box, let us know what you thought in the comments!

Assuage your deep depression by checking out Disney Subscription Boxes in the directory! 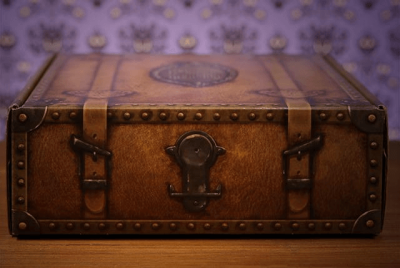